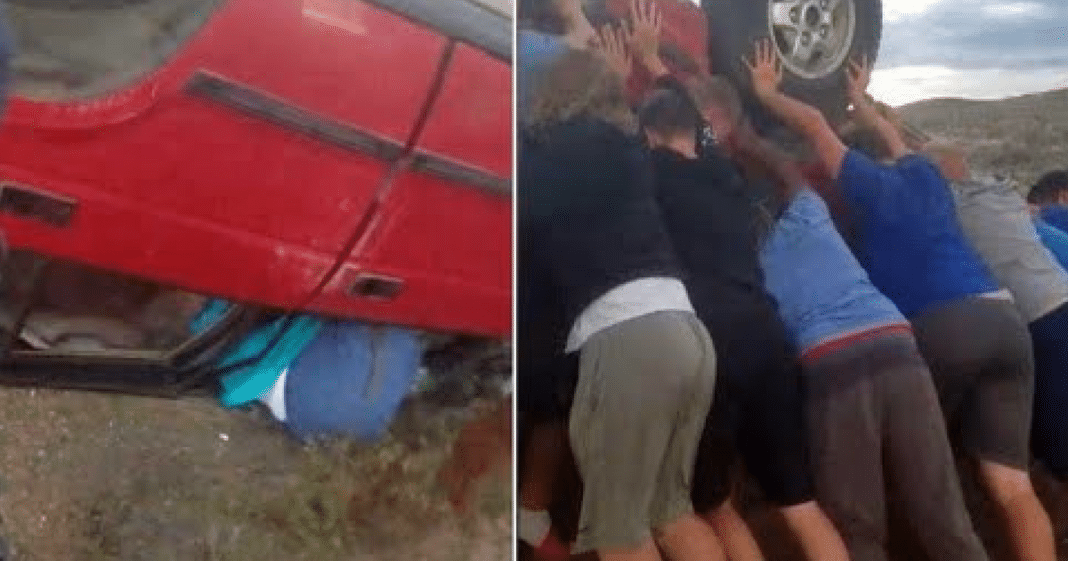 Members of a youth football team are being called heroes after they rescued two passengers from an overturned vehicle. While returning from a championship tournament in San Jose, New Mexico, the Boise Black Knights didn’t hesitate to help two stranded passengers in need. Their two school vans happened upon an overturned car at the side of the road in Oregon.

“We were all driving, they came around the corner and seen an accident with a car rolled over, and the two vans pulled over,” Rudy Jackson, the team’s coach, told ABC News’ Good Morning America, Thursday.

The vans stopped to help the trapped passengers. The boys were between the ages of 12 and 14. One of them recorded the rescue on video. “It wasn’t really something we thought about. We just instantly pulled over,” Regan Magill, the young athlete who captured video of the incident, told the Statesman. “I don’t want to imagine what would happen if we were not there to help.”

The footage shows the boys assisting a man from the overturned car before returning to help extract the female passenger. Several members of the team stood on one side of the car to remove the wreckage. While others helped cut the woman from her seatbelt. It’s tough to say what would’ve happened if the team didn’t stop to help the couple.

The Malheur County Sheriff’s Office told PEOPLE in a press release that it took a responding officer over an hour to reach the scene after the initial call for help. He had vehicle trouble of his own. “When the deputy arrived he found the ambulance attending to the two occupants of the vehicle,” the statement said. “There was no sign of a football team at the scene when he arrived. He took statements from the vehicle occupants as well as another witness but it was never mentioned to him about how the occupants were removed from the vehicle by a football team.”

The crash was likely caused by gusty winds. It was later when the responding officer heard from locals how a football team had saved the accident victims. Thankfully, the man and woman are said to be doing just fine.

“It’s nice to see kids doing a good deed like this; I suspect they have some great coaches leading them,” Undersheriff Travis Johnson said. “It’s hard to know exactly what would have happened if  this team hadn’t been there to rescue the trapped female, but as it is, it looks like everyone is  going to be just fine.”

Magill told Good Morning America he and his teammates were inspired to act because their coach, Jackson, taught them to “play selfless football and not selfish — just help others out before yourself.”

Jackson was overcome with emotion when talking about the moment. “I’m more than proud. I’m at a loss for words,” the coach had told the Statesman. “They got out of the car like they were supposed to do that…it’s a great bunch of kids.”