Destress Watching Adorable Animals of All Shapes and Sizes Yawn 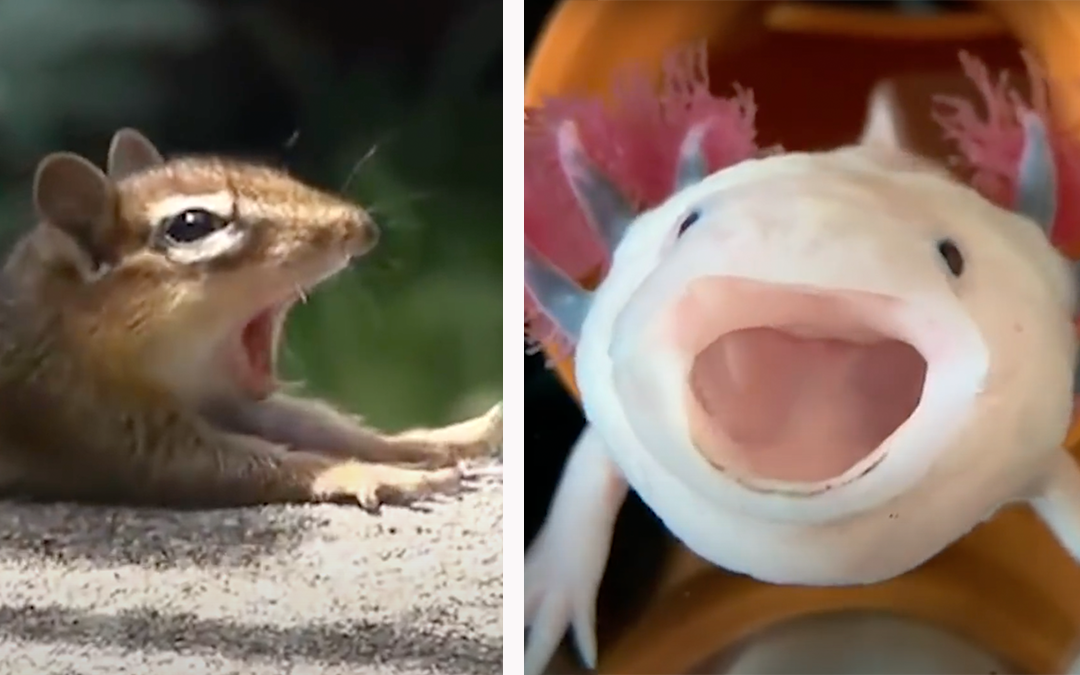 Animals of all shapes and sizes share a universal language: the yawn.

Today, millions of people are feeling stressed due to the COVID-19 pandemic and a chaotic election season. We could all use a breather, couldn’t we? Therefore, we’re offering up something sure to help!

Today, we could all use a big yawn rather than more stress. As we all know, yawns are harmlessly contagious. Even if you cover your mouth when you yawn, others will also. So, if you’re reading this in public, please be sure you’re wearing a mask. Then, yawn away!

Scientists have found that contagious yawning is triggered automatically by primitive reflexes in the brain. It affects not only humans but other animals like chimpanzees and dogs. As any pet owner knows, your dog can catch a yawn from you and vice versa.

Yawns are commonly seen in pets of all kinds, from cats to fish to birds to reptiles -including snakes! Most of the time, they seem to be doing it for the same reason we do. However, in nature, the message can be much different. For example, baboons yawn to show aggression. As in, “Check out my fangs!”

On the other hand, for penguins, a yawn is part of the courtship ritual. Surely, they aren’t bored with their partners? Sometimes, a penguin will yawn as if for the same reason we do.

See the short below from Penguin Researcher:

Yawning: A Great Way to Chill Out

Even though so many animals yawn, the real reason remains unclear, much like dreaming. Leading yawn researchers have said:

“Yawning may have the dubious distinction of being the least understood common human behavior,” said Robert Provine from the University of Maryland.

Although the reason for yawns may be unclear, for our intents and purposes, we intuitively believe it helps us chill out. Well, that notion is also backed up by some research, after all. The larger the brain, the bigger the yawn, leading scientists to speculate that it’s meant to lower the temperature.

Whatever the real reason, yawning is a good way to let off steam and stress. Plus, it’s just cute, which is why videos and pictures of yawning critters are posted all over social media. For example, check out this yawn from a pampered pet python:

So, without further ado, here are some of our favorite yawning videos. We hope they will help you relax in a world that really needs to chill out today.

Videos That Are a Real Yawn

First, we defy you to watch the video from College Humor below and not yawn. (Or at least have a laugh!) There’s also proof of contagious yawns between man and man’s best friend.

Now for something unexpected. The Dodo calls the following example, “the world’s cutest yawn.” It’s the little water monster known as the Axolotl, and well, you have to see it for yourself. These little amphibians are now rare in the wild but are being saved by scientists. After seeing their cute little faces, you can see why.

Is it the world’s cutest yawn? With some stiff competition from guinea pig yawns by the sheer number of views, the jury is out.

Now for a look at Oliver the Beagle, who has not one, but seven different yawns. Oliver’s family managed to catch the assortment of yawns on video, including a squeaky yawn that’s too adorable. However, the “barbaric yawp” might be the best.

The Universal Language of Yawns

Below, we get to see yawns from such a wide variety of animals. Have you ever wondered what a hippopotamus looks like yawning? Or how about a Koala bear? There’ also a snake caught in the act. No matter what type of animal, they don’t appear threatening whatsoever in those quiet, gentle moments.

They say the universal language is music. However, when it comes to critters, it’s definitely yawning.

See the compilation from the Dodo below:

We hope all these yawns have helped eliminate some measure of stress today. They sure helped us chill out. Remember: we’re all connected and have much the same needs. Therefore, be gentle and treat each other with some much-needed kindness out there!

Recommended Reading: Baby Sneaks In And Steals The Show From Piano-Playing Rescue Dog