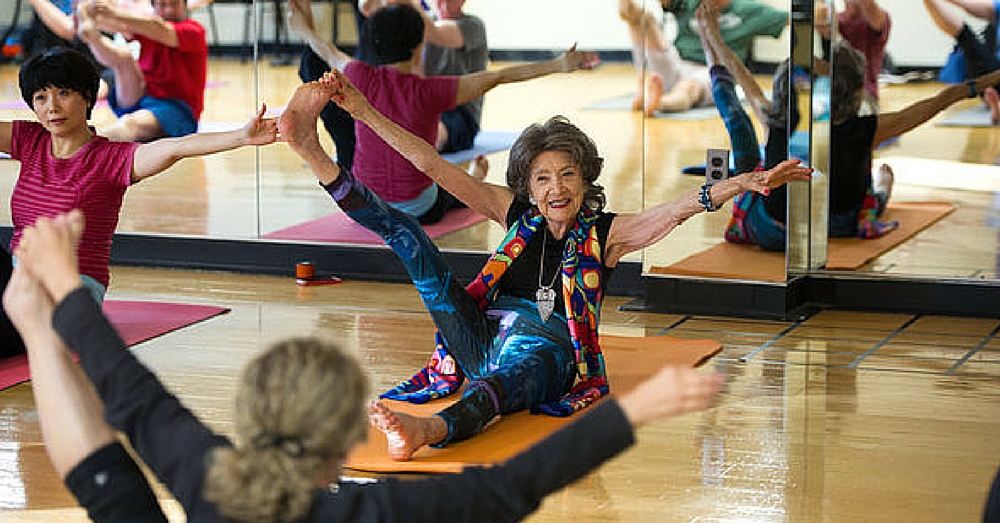 She put down a mat, folded her long, limber legs into a lotus position, and began teaching her zillionth session. Softly, she guided the 15 or so students through stretching and strengthening moves, and meditative breathing.

The group, at the JCC of Mid-Westchester in Scarsdale, ranged from rank beginners to 20-year veterans of Ms. Porchon-Lynch’s classes, which she has been teaching for decades. She walked the room, adjusting poses, as her students shifted from dog to cobra to camel.

Ms. Porchon-Lynch herself moved through the poses with no apparent effort. At one point, she suspended herself above the floor, supported by her arms.

“Feel your whole body singing out, and hold,” she instructed.

“The ladder of life will take you to your inner self,” said Ms. Porchon-Lynch, who said that before the class, she had knocked out two hours of ballroom dancing.

“I did the bolero, tango, mambo, samba, cha-cha and, of course, swing dancing,” she said.

After the class, she slipped back into her heels — modest height, by Tao standards. Six-inch stilettos are more her speed because the lift helps the flow of energy from the inner feet up through the body, she said.

Back at her apartment in White Plains, she pointed to a photo of herself being dipped dramatically by a dance partner in a competition.

“He was 70 years younger than me,” she crowed. When Ms. Porchon-Lynch was in her 80s she began competitive ballroom dancing and competing widely, even appearing on “America’s Got Talent.”

“I’m very silly. I haven’t grown up yet,” she said. Then she sat and described her “I was there” life story, a march through history that rivaled a Hollywood film.