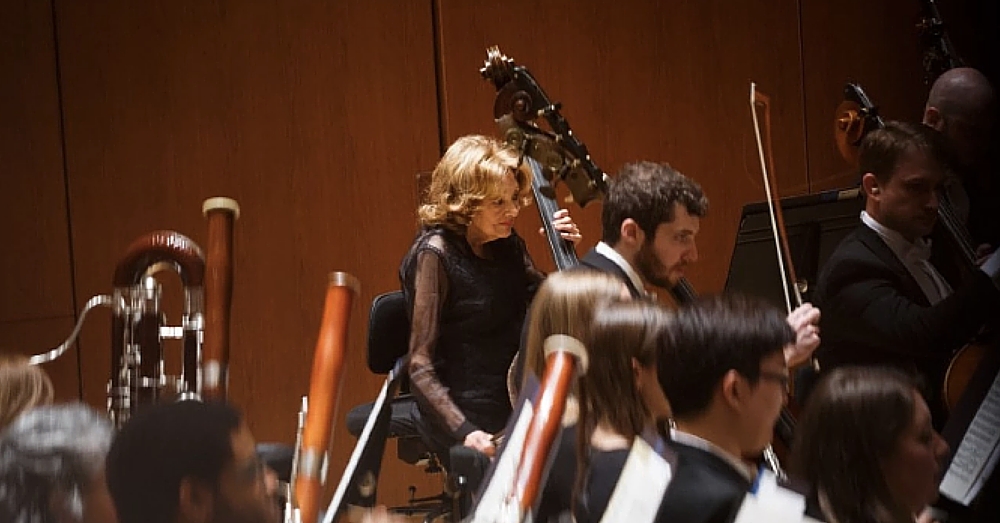 Jane Little, who debuted as a bassist in Atlanta on Feb. 4, 1945, at age 16 and who never stopped playing, died during a performance of the Atlanta Symphony Orchestra on Sunday. She was said to be the longest tenured orchestra musician in the world. She was 87.

“We can say that Jane was fortunate to do what she loved until the very end of her storied life and career,” the symphony said in a Facebook post. “The Atlanta Symphony Orchestra was truly blessed to have Jane as part of our family for the past 71 years and we all miss her passion, vitality, spirit and incredible talent.”

“Her footprints are permanently etched on that stage,” wrote another admirer, Doug Ireland. “Everyone who ever attended a concert was amazed to see this tiny woman with that huge instrument!”

“Was at the performance today when Jane Little collapsed,” said a post by Rosemary Kord. “So sad to witness this tragedy. Happened in the last couple of minutes of the final song. I am still shakened and send my prayers to Jane’s family and to her musical family, The Atlanta Symphony. If there is a Requiem in her honor, I would like to be in attendance. RIP dear lady; you are an inspiration!”

The symphony was performing a pops concert called “Broadway’s Golden Age,” according to its schedule. A spokeswoman said the players were about 30 seconds from the last measures of “There’s No Business Like Show Business” from Irving Berlin’s “Annie Get Your Gun,” the encore to the concert when Little collapsed and was carried backstage by her fellow bassists. She never regained consciousness.

“She seemed to be made of bass resin and barbed wire. She was unstoppable,” bassist Michael Kurth, who was playing next to Little when she collapsed, told The Washington Post on Sunday night.

Kurth, 44, added that “I honestly thought I was going to retire before she did, honestly.”

The symphony did not provide a cause of death. Little had not been feeling well. She had been undergoing chemotherapy for multiple myeloma, had missed the orchestra’s April concert in Carnegie Hall in New York, and told Russell Williamson, the ASO’s senior orchestra manager, during intermission at Saturday night’s concert that she felt weak and woozy. That night, violinist Ellie Kosek asked Little to call when she got home safely, which she did.

Little was not a physically imposing figure. She weighed 98 pounds and had battled through, in addition to the myeloma, a broken shoulder, elbow and pelvis in recent years. Last August, she fell and cracked her vertebra, leaving her unable to play.

But in February, after months of rehabilitation, Little took to the stage and passed the record set by Frances Darger, the Utah Symphony violinist who had retired in 2012 after 70 years of playing. Little took pride in her feat.