She Works 2 Jobs But Can Barely Make Ends Meet. Then Stranger Flips Her World Upside Down 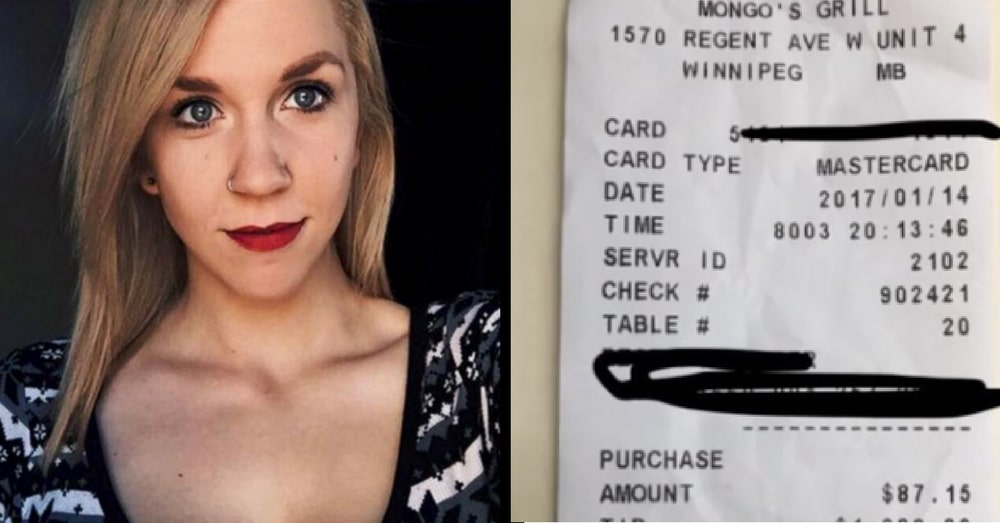 One Winnipeg waitress was left completely floored by the kindness of a stranger who came into her restaurant. Now she plans to pay that kindness forward.

Jennifer Peitsch, 20, is a waitress at Mongo’s Grill in Winnipeg, Manitoba and was working an unusually busy shift on Saturday. She knew people were getting impatient and she was getting anxious, but one kind patron told her she understood exactly how she felt and helped her feel more calm.

“Everything was taking a little longer, and I was really anxious and stressed out,” Jennifer said. “This woman told me she used to be a waitress and she understood how I was feeling.”

When Jennifer picked up the check from the woman’s table she couldn’t believe her eyes. The woman had left a $1000 tip on her $87.15 bill! 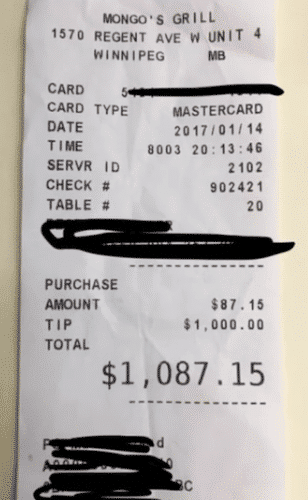 “I thought it was a mistake,” Jennifer said, “but she assured me it was the right amount, and I just started crying and thanking her so much.”

There is no way the woman could have known it, but Jennifer really needed that money. She said she works full time at a grocery store from 7 a.m. to 4 p.m. and then waitresses from 5 p.m. to 10:30 p.m. just to make enough money to make ends meet.

She used the $1,000 to fully pay off a credit card debt and said she is excited to begin saving money for college.

While Jennifer did not get the kind woman’s name at the time, after sharing her story on Facebook it came out that the woman’s name is Lisa Julia Holgate and the two were able to reconnect.

Lisa said she is “ecstatic” for Jennifer and hopes she will repay the kind act with one of her own.

“She asked me why I did this, and I said I was a good person, and I figured that she was a good person and she’s working hard and she deserves it,” Lisa said. “I just said, ‘Pay it forward.'”

Were you touched by what this woman did for Jennifer? So share this!