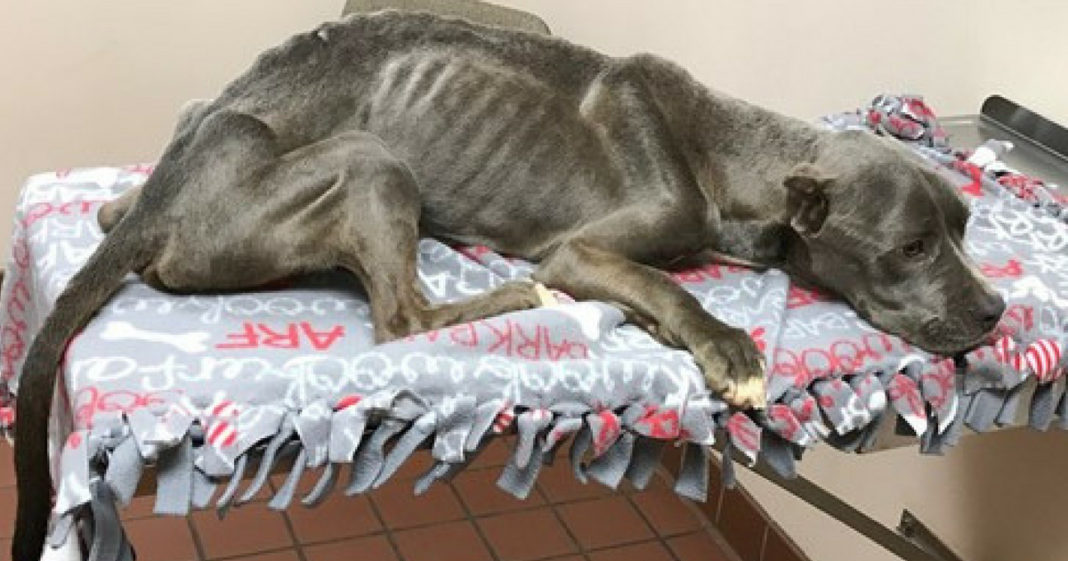 Mikey is a maintenance man working for an apartment building in Georgia. He’s tended to many different requests, but nothing prepared him for what he’d find in one particular apartment. It wasn’t the maintenance issue needing his attention that caught his eye, but the appearance of the emaciated grey pit bull he found inside.

The man wanted to do something to save this poor dog. He contacted the authorities; they informed him if he removed the dog, it would be considered stealing. So, he contacted Animal Control who came out and left several notices on the owner’s door.

One day, Mikey found the dog outside the door locked inside a crate, the owner’s indicated they were surrendering him.

Staff at Grayson Animal Hospital were warned of the condition of the incoming pup. Yet nothing they were told prepared them for what they found on his arrival. The pit bull, whom they named Mikey after the man who rescued him only weighed 24 pounds. He should weigh twice that much.

“When he came up here he was crying; he was in tears, he was in disbelief,” Cinnamon Koch, one of the rescue workers, said. “He saved this dog’s life.

“This is the worst abuse I’ve ever seen,” Koch said. “He’s so sweet and loving all he wants to do is kiss you.”

Mikey was also covered in burns and wounds.

“He doesn’t have enough strength to stand, and he looks like a walking skeleton,” said Dr. John Tolliver. “It makes you sad, and it makes you angry that someone would allow an animal to get into that shape.”

Out of the Box Boxer Rescue and Society Humane Friends of Georgia, the main organizations responsible for Mikey’s care believe the brave boy will make a full recovery. It won’t be easy or cheap. to help with his medical bills, four girls – Annabelle, Ari, Addie, and Rylee pooled their allowances together to help out. Other young people are encouraged to donate to help give Mikey a fighting chance.

I hope Mikey’s former owners will be charged with abuse and neglect. There’s no reason why anyone should mistreat such an innocent, helpless animal with such disregard and cruelty. I’m just glad Mikey’s in a safe place where he’s being loved and properly cared for.