Women Are Going Crazy Over This Photo Of Florida Cops. PD’s Response Is Golden! 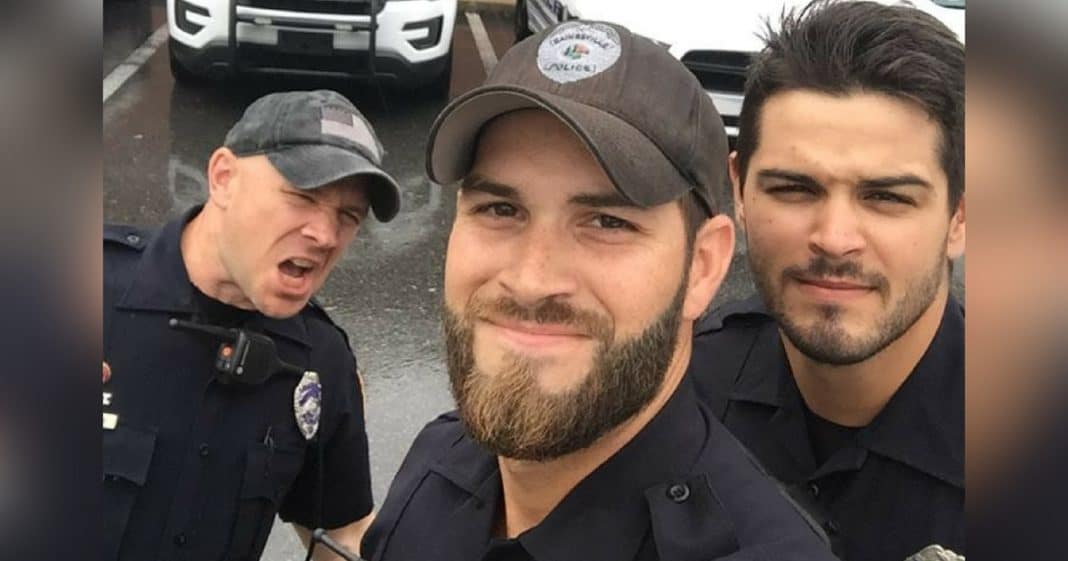 When the Gainesville Police Department posted this photo of Officers Nordman, Hamill, and Rengering getting ready to go out and help the victims of Hurricane Irma, they had no idea they were about to become a viral sensation!

In a matter of hours, thousands of women had shared and commented on the photo, asking who the “hunks” were and joking that they were in need of some police protection.

“So, looks like my next vacation will be spent in Gainesville rolling through stop signs and driving with a tail light out every evening until I’ve been pulled over by the entire night shift,” LJ Rhodes joked. “It’s gonna get expensive, and my insurance premiums will go through the roof from all those tickets, but… *fans self with a stack of travel brochures and birth control pamphlets*”

Laura Hutchinson Vaughn sent a message to her daughter, telling her, “I think a mother/daughter trip to Florida is in order. But don’t bring bail money for me, I’ll do my time.”

Luci Kaye got in on the fun, at first seeming like she was chastising all the eager ladies: “I can’t believe how many women are objectifying these poor, fine, young, strong,handsome, brave, sexy, delicious, virile, ovulation-inducing, mouth-watering, beefy….. I can’t remember where I was going with this…”

Others even suggested the officers put together a photo calendar to help raise money for the relief effort. “Do a calender, add puppies and I’m pretty sure we can rebuild Texas and Florida,” Alaina Craven joked.

The police department couldn’t believe the attention the photo had gotten and quickly wrote an update for all their new fans:

UPDATE:
1. We are dying with the comments. You’ve actually made our chief blush with some of them.
2. MRS. Nordman and MRS. Hamill have also enjoyed knowing how millions of women are going crazy over their husbands.
3. We can confirm that Officer Rengering (far right with the amazing hair) IS SINGLE.
4. On another note, Officer Rengering is being placed into Cougar Prey Protective Care, similar to the witness protection program for his safety.
5. Please do not call 9-1-1 and request this group respond to your “incident”
6. There WILL be a calendar.

Thank you all for the hilarious comments…they have brightened our time up here. As for the calendar, we are going to try and do something fairly quickly and funds raised will go to Hurricane Irma recovery here in Florida.

It appears the department won’t be lacking in models for the proposed calendar. A short time later they posted some photos of another handsome Gainsville officer, Officer Hatcher, as he patrolled the damaged areas.

Not to be outdone, the Sarasota Police Department shared a photo of some of their own hunky cops getting ready to help with rescues.

In the midst of so much tragedy and destruction, it’s nice to be able to have a moment of levity and share in a laugh. We’re sure all the attention they’ve received has brightened these officers’ days as they go out to do the difficult job set before them.

They do want to remind folks, though: only call the police if you have a real emergency! The commenting and joking is all well and good, but let these brave officers do their jobs!

Did you find the comments and the police department’s response as funny as we did? So share this!