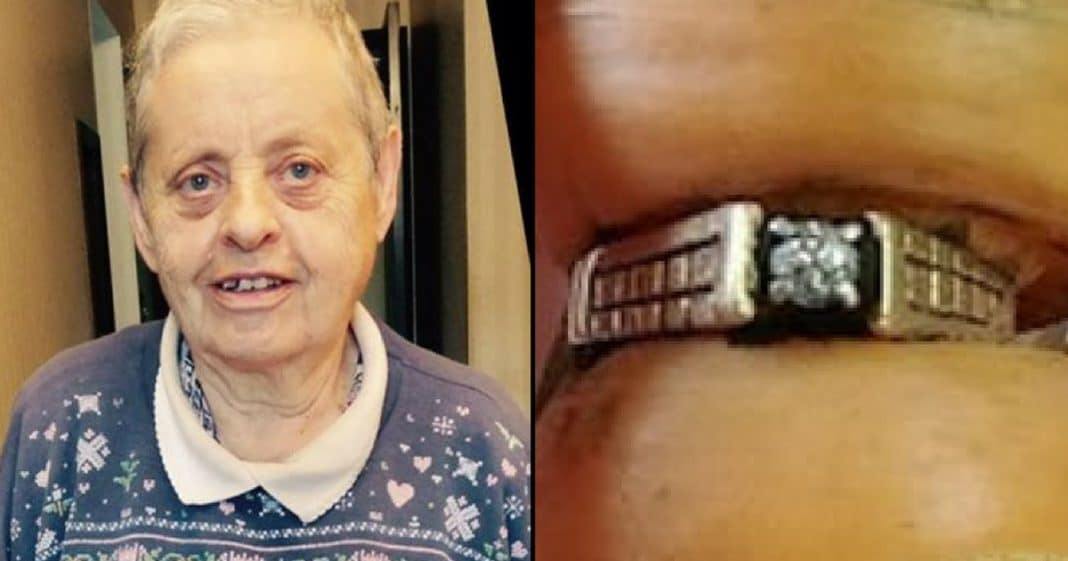 Losing a precious item, one that’s been in our lives for years, hurts. There’s so much emotional value to the simplest of objects, so many memories attached to the most normal of treasures. When we misplace one, the pain of not having this memento cuts deeply – we fear we might forget some of the memories associated with it.

An eighty-four-year-old woman in Canada discovered this firsthand. Thankfully, her story ends happily.

Mary Grams spent over 60 years on a farm in Alberta, Canada, with her husband, Norman. Thirteen years ago, while weeding in her garden, Mary lost her engagement ring – the one Norman had gifted to her when he proposed decades earlier.

“We looked high and low on our hands and knees,” Mary recalled. “We couldn’t find it. I thought for sure either they rototilled it or something happened to it.”

Mary was devastated by the loss of her precious ring. “I cried so many times,” she said. Mary had worn the ring since 1951 – it had never left her finger.

She couldn’t bear to tell her husband about losing the ring, so Mary kept the sad secret between herself and her son. “I didn’t tell him (Norman) even, because I thought for sure he’d give me heck or something,” she said. “Then I finally went to the jeweler and bought a cheap ring. I only told my son, I didn’t tell nobody else.”

A few weeks after losing her engagement ring, Mary bought herself this one, much smaller, to replace it. #Camrose pic.twitter.com/sg9WN4y1Pb

Norman died five years ago, just after the couple’s 60th anniversary, never knowing about the lost ring. According to Mary, he didn’t notice the less expensive replacement. Even still, Mary was heartbroken that she would never see the ring Norman had bought her again.

But just this week, Mary received the most wonderful of surprises; one she never expected.

The farm Mary lived on for the majority of her life has been in the family for over 100 years. As Mary’s daughter-in-law, Colleen Daley, was retrieving vegetables for dinner the other night, she found the ring wrapped around one of the carrots!

#BeatBreakfast Mary Grams lost her engagement ring in her garden in 2004. Now she found it… wrapped around a carrot. #Alberta pic.twitter.com/Uzk1TnwG2E

Colleen presented the malformed carrot with the ring to Mary.

“I recognized it right away,” Mary said. “They found it yesterday when my daughter-in-law was digging carrots for supper.”

At first, Colleen just thought she had an odd-looking vegetable in her hand – she didn’t notice the ring. She briefly considered feeding the treat to her dog but changed her mind. It was only when she washed the carrot later that she noticed the ring.

“It was pretty weird-looking,” she said. “I’ve never seen anything like that.”

The origin of the ring wasn’t difficult to track. “I knew it had to belong to either grandma or my mother-in-law,” Colleen said. In its long history, no other women have lived on the land.

So finally, after 13 years and too many tears, Mary Grams gets her ring back. Surrounded by those dearest to her in her home in Camrose, Alberta, Mary gently cut into the carrot and removed her ring. She washed it and then giggled as the jewel slid home on her finger. “I thought I would have to go to the jeweler today, but it still fits,” she said gleefully.

We’re thrilled for Mary! The dear lady had given up hope that she’d ever wear her ring again, but fate (and hungry bellies) intervened. As strange as it is, we owe thanks to one lone carrot for protecting such a valuable treasure.

Were you surprised to see where the ring was after all these years? So share this!