Woman Paralyzed After Falling 17 Ft, Then Boyfriend Prays. What Happens Next Is A Miracle 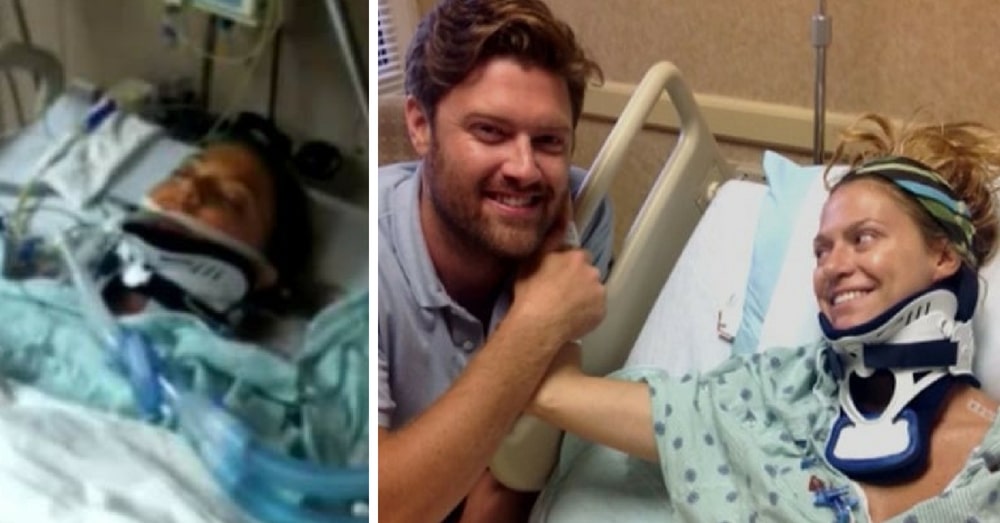 From the outside it looked like Liz Mitchell had it all together. The 32-year-old Dallas District Attorney was smart, successful, and always perfectly put together.

But on one fateful day in 2012, Liz’s seemingly perfect life would come to a crashing halt.

Liz was on her balcony playing with her dog when she leaned back too far and fell 17 feet headfirst onto the pavement below.

When she woke up five days later from a medically-induced coma she was paralyzed from the neck down.

Her boyfriend, Bryan, was the one who broke the news to her, but something about the way he said it gave Liz hope.

“He didn’t just say, ‘You’re paralyzed; you can’t walk,'” Liz recalled. “He specifically said, ‘One day, we’ll move to Waco, we’ll get married, and we will have a beautiful life. And it does not matter if you are in a wheelchair.'”

“Whatever God is going to allow you to get back,” he added, “we’re going to maximize that.”

Even still, Liz had a hard time finding peace in the midst of her circumstances.

“I went from a 32-year-old woman that was healthy, having a boyfriend who really never saw me with a hair out of place… to lying in a bed in a diaper,” she said.

She realized that everything she had used to define her life before was now irrelevant.

“Before I seemingly had everything, I was successful and healthy, and from an outsider, it looked like I had everything,” she said. “But I wasn’t grateful, I never said ‘thank you.’ One day you wake up and you have a breathing tube in and you can’t move a muscle… you realize the body that you thought was so important and defined who you were is useless.”

Bryan himself was crushed seeing her like that. In that moment he began to pray.

“I lowered my head and I said a prayer,” he recalled. “It was the most heartfelt prayer I’ve ever said.”

Then, just like he had every day when he came to visit her, Bryan asked Liz to try and wiggle her toes.

This time, she did it.

Bryan later called it “the most miraculous moment I’ve ever experienced in my entire life.”

That one little movement lit a fire in Liz, and from that day on she pushed herself to work as hard as she could to get her mobility back.

A little while later Liz walked out of rehab, and shortly after that she walked down the aisle to marry the man who had stood by her side through her darkest hours.

“The relationship you develop going through a story like that and seeing the person she became in the darkest depth of her struggle… I knew I didn’t just like this girl, I loved this girl,” Bryan said.

Then Liz did something that doctors said she never would – she got pregnant!

Doctors had to closely monitor her pregnancy to make sure both she and the baby were safe, but two years after marrying Bryan, Liz gave birth to a healthy baby girl.

They named her Dorothy Marie, which means “gift of God.”

“I cannot believe it…it is such a miracle,” Liz said. “It seems like a dream, but I’m ready.”

Were you amazed by Liz’s miraculous recovery and her attitude through it all? So share this!