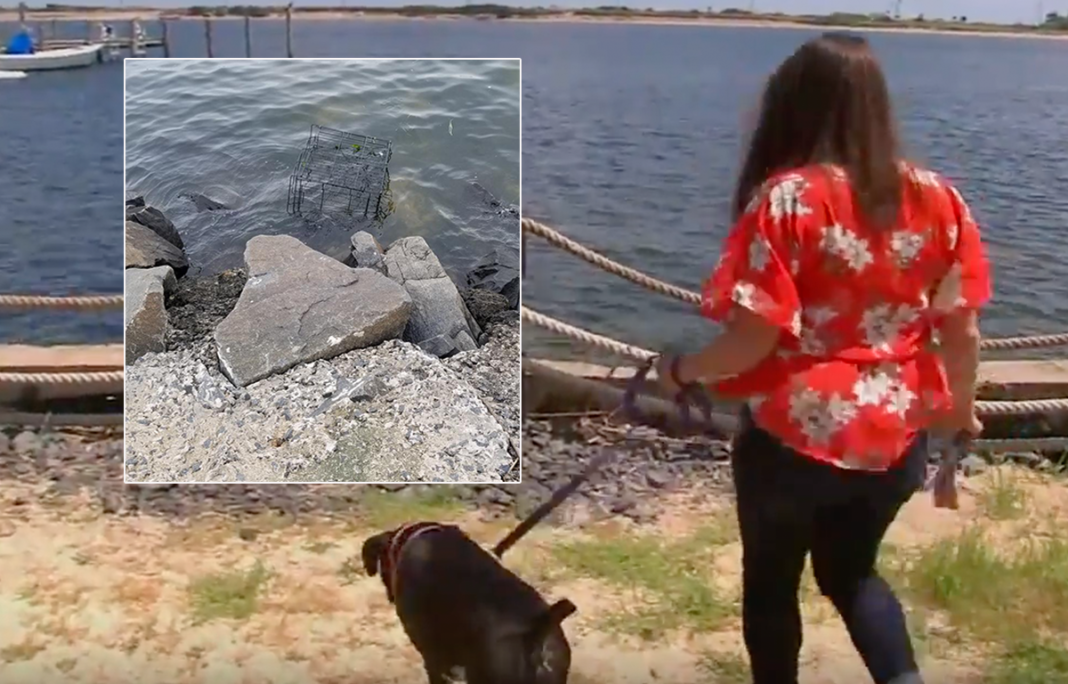 Early on Monday, July 30, someone left a young pit bull mix dog on the beach at Veterans Memorial Park in New Jersey. But not only that, they locked him in a crate and put the crate in the water on jagged rocks, knowing that the tide would come in and the dog would drown.

?Please share ?Early this morning, a darling pittie mix now named River, was found on the beach locked in a crate in…

Fortunately, Jennifer Vaz was out for her routine morning run on the shore and noticed the poor dog before the tide could drown him, although the waterline was up quite high by that time.

At 6:15 a.m. she and her dog, Molly, a 4-year-old boxer, approached the shoreline. Molly nudged her toward the shore, cueing her in to a strange noise.

“I thought it was because of birds because there are some birds here on the water, and when we got closer, I heard the whimpering, and when I looked down I saw these eyes looking back at me,” said Vaz.

She couldn’t believe somebody would be so cruel:

“I couldn’t believe that this happened in our town and somebody could be this malicious and do that to that dog.”

Vaz climbed over the seawall and rescued the dog. He was half-way submerged under the water. After taking pictures of the cage to show the police, she headed to the Highlands police department.

She and the two dogs walked roughly a block, according to their GoFundMe page.

She named the dog River and put her dog’s collar (with tags) on him to prevent him from running away.

Her boyfriend, Chris Klostreich, started a GoFundMe page at the suggestion of many in the community. Jennifer became known as the “Heroine of Highlands” for her rescue of River. They plan to use the funds to pay for ongoing care for River, puppy training courses, and ongoing medical costs.

On August 2, Vaz gave an update on River:

“I picked him up from Monmouth County SPCA st 6pm yesterday. He’s loved, safe, and happy!!”

The Monmouth Country Prosecutor’s office estimated that the dog had been left between 4:00 a.m. and 6:00 a.m. Vaz arrived at 6:15 a.m., and had she not arrived so early, the dog would have drowned just minutes later.

Ross Licitra, with the SPCA, said they would follow every lead to find out who committed this horrendous act of cruelty.

He asked the public to report any leads that might help them find the perpetrator/s. The Monmouth County prosecutor, Chris Gramiccioni, says if the person/s committed an intentional third-degree offense, that would mean 3-5 years in prison.

Meanwhile, Jennifer Vaz is working for stricter laws and punishments for those who would perpetrate animal cruelty. She shared a petition to support “River’s Law” that has so far reached 15,800 signatures at change.org. The law would change acts of animal cruelty from a misdemeanor to a felony, place convicted felons on a national animal abuse registry, lengthen jail times, and impose higher fines.

She organized an event to push for Rivers Law at Veterans Memorial Park on August 7. River and Molly attended and enjoyed “kisses and scratches” as well as donations of toys and food.

My family (Chris, Me, Molly and River) would like to thank everyone who came out yesterday to support River's Law and…

A friend dedicated a wonderful poem to River to support River’s Law:

thank you Sherry Kriss-Dillane for dedicated this beautiful poem!!! beautiful

See the video from Eyewitness News ABC7NY below: