Woman Nervous When Cops Knock On Door, Then They Hand Her Bill That Leaves Her In Tears 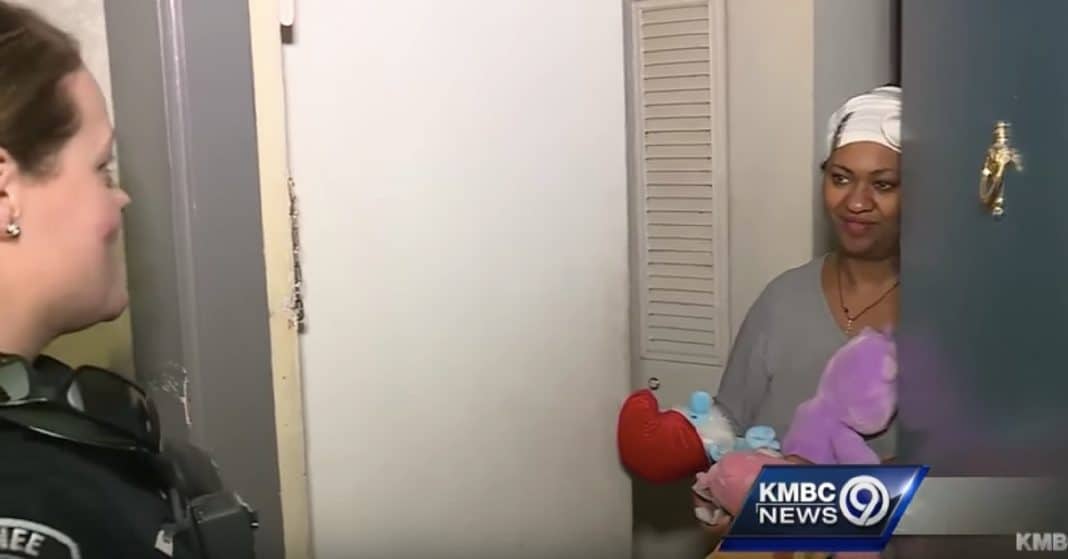 During the holidays, many of us run around trying to find the perfect gifts for the special people in our lives. There are television commercials, online advertisements, and email campaigns from major department stores and online companies offering sales and deals. Shops and streets are covered in festive decorations. It would seem that everyone is rushing about getting ready for the holidays.

For many though, December is just as desperate a time financially as every other month of the year. Buying presents is the farthest thought in their minds. They’re just trying to get by.

But for some struggling folks in Shawnee, Kansas, Christmas has come early.

For the third year in a row, an anonymous donor has generously given $10,000 to the community. There aren’t any stipulations attached to how the money is to be distributed – it’s up to the police department and its officers to determine who should receive the $100 bills.

The only qualification? Need.

The officers charged with handing out the cash decide who is deemed needy enough. Recipients can be the folks officers encounter during their daily patrols or those they’ve met this past year.

For many people, seeing an officer approach their front door leaves them nervous. Police don’t usually arrive on your doorstep unless you’re in trouble or something is wrong. When knocking on the doors of her recipients, Officer Herber leads with, “You’re not in trouble,” to put the residents at ease.

Police Major Dan Tennis said the purpose behind this generous donation is to help strengthen the ties between the members of the community and its police force.

Officer Stevens is grateful for the opportunity. He said he hopes the community will realize that “what you see in the media isn’t representative of all of us.”

Erin Williams was a lucky beneficiary of the secret Santa program. Williams lost her job this past spring and had her car stolen just two months ago.

“I’m going to be honest,” she said, “[Stevens] scared me a little when I saw him at the door because my heart was pounding and all I could think was, ‘Oh no, what happened now?’”

Surprise! What a fabulous gift!

Another lucky recipient was pulled over, but instead of writing them a ticket, the police officer handed them some cash. The driver was overjoyed and very thankful for this shocking turn of events.

This Secret Santa program doesn’t only help the town residents; it also blesses the police officers.

“To be able to help during that time is powerful,” Tennis said. “We’ve had long-term veterans getting teary-eyed telling us about the people they’ve met.”

Who wouldn’t love being responsible for spreading goodwill and cheer? What a special gift to be able to give this Christmas!

Did you love watching these officers spread Christmas cheer as much as we did? So share this!