Woman Invites Cop Who Arrested Her To College Graduation. When I Saw Why – Holy Moly! 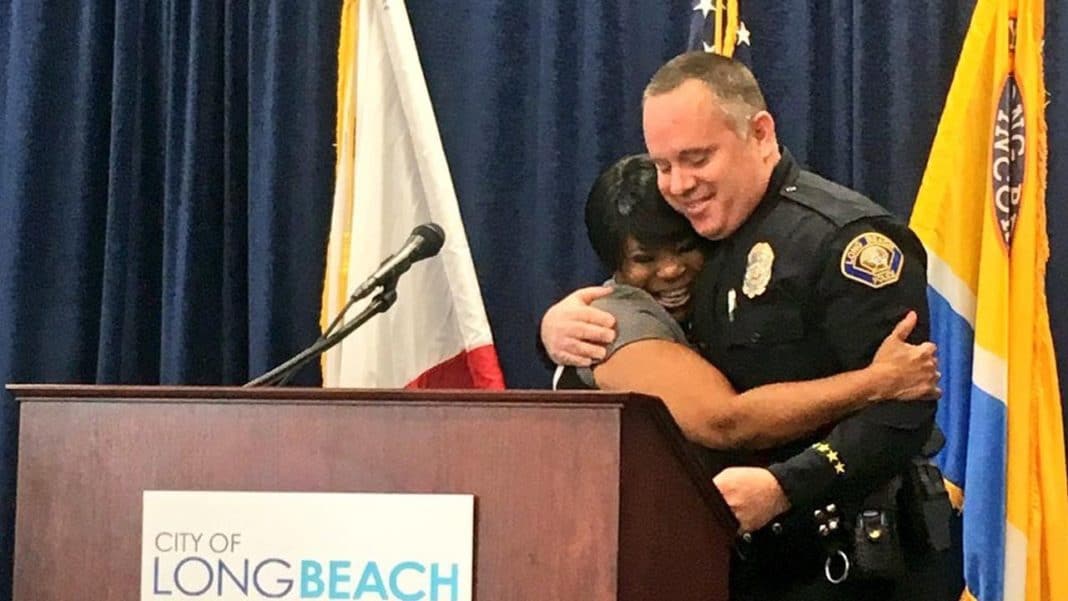 Five years ago, Tiffany Hall was battling her addiction to drugs. She has since turned her life around and is now honoring the man who, through his compassion changed her life for the better. Lieutenant Jim Foster of the Long Beach, California Police department first met Tiffany when he arrested her on drug charges.

He took her back to the police station and filed the necessary paperwork. He didn’t stop there, according to Tiffany. He spent his time encouraging the young woman to find a purpose in life. “He would encourage me all the time,” Hall said during a press conference last week, which reunited her with Foster years after her initial arrest. “‘Tiffany, you can do better than this. Tiffany, why don’t you try to go to school. Tiffany, why don’t you stop.’”

For the officer, it was Tiffany’s humor and friendly personality that stuck out during their encounters.

“She was a unique personality,” Foster said. “Lots of humor. She had a great story to tell, and I noticed she had a tough exterior but a soft interior.”

The substance abuse epidemic in this country continues to claim thousands of lives each year. A government study found in 2016, 64,000 people died of accidental overdoses; this is a 22% increase from 2015. Approximately 75% of those 2016 deaths were due to Fentanyl, heroin, and prescription opioid overdoses. There are many of ways to treat addiction, the National Institute on Drug Abuse says, including mental health services, behavioral therapy, and medication.

During her reunion with foster at the Long Beach Police Department headquarters, a now clean Tiffany reflected on her days living as an addict. She also thought back to how Foster influenced her to change her life. “I became a product of my environment — drug infestation — and I became that,” she said. “But then somewhere, somehow Lt. Foster became a part of my life. For some reason, he would always take me to jail.”

In May, Tiffany is going to graduate from college. She will walk across the stage to receive her diploma, something she didn’t think possible just a few years ago. She’s invited foster to sit in the audience and witness the momentous occasion.

“The biggest joy of my professional career is from time-to-time having contact with people who have found their way out of horrible circumstances and into life’s success,” Foster said during the press conference. “Things that a lot of us just take for granted for people who have a much rougher life story.”

Foster, through compassion and patience, taught Tiffany a valuable lesson. One she’ll live with for years to come. “I tell myself every day, ‘Don’t look back behind you, because there’s nothing back there,’ “ Hall said. ‘ “You’ve got to keep looking forward.’ “