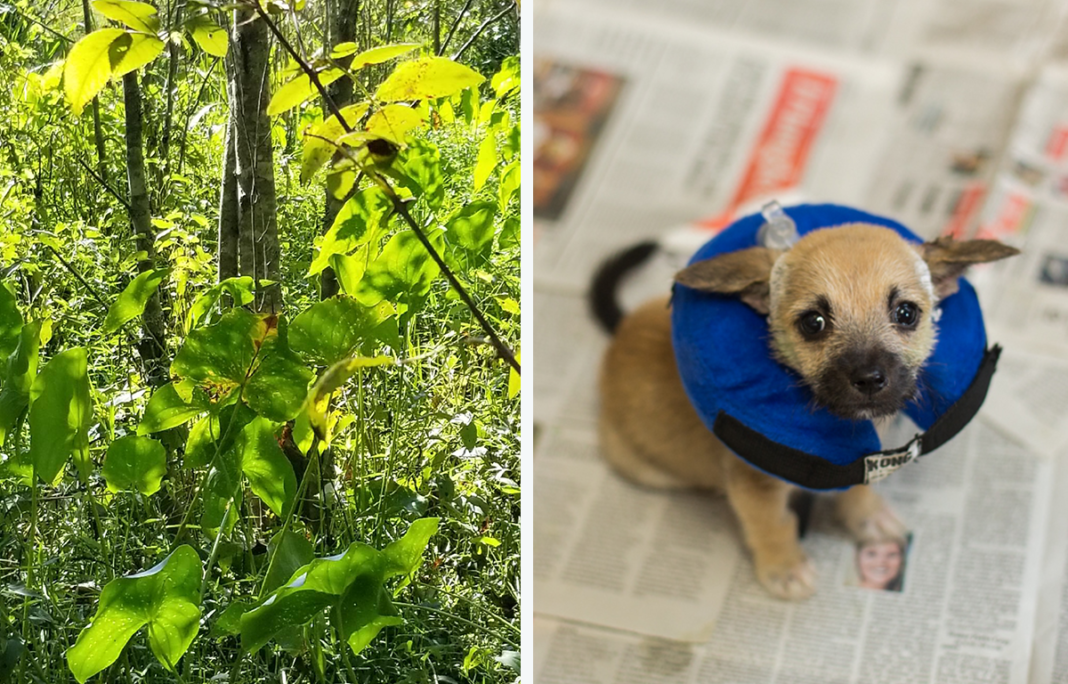 East of Raleigh, North Carolina in a small town of Zebulon, Jessica Clayborn was hanging the laundry out to dry in her backyard when an unusual noise caught her attention.

Her yard backs up to a swamp, with thick dense weeds and mud. Hearing all kinds of sounds from wildlife is the norm. But this time, it sounded like a distress call.

She walked over toward the swamp and followed the high-pitched cries until she saw movement on a patch of dry land surrounded by knee-deep mud. It was a tiny puppy, and he was tied to a tree, struggling to get free. 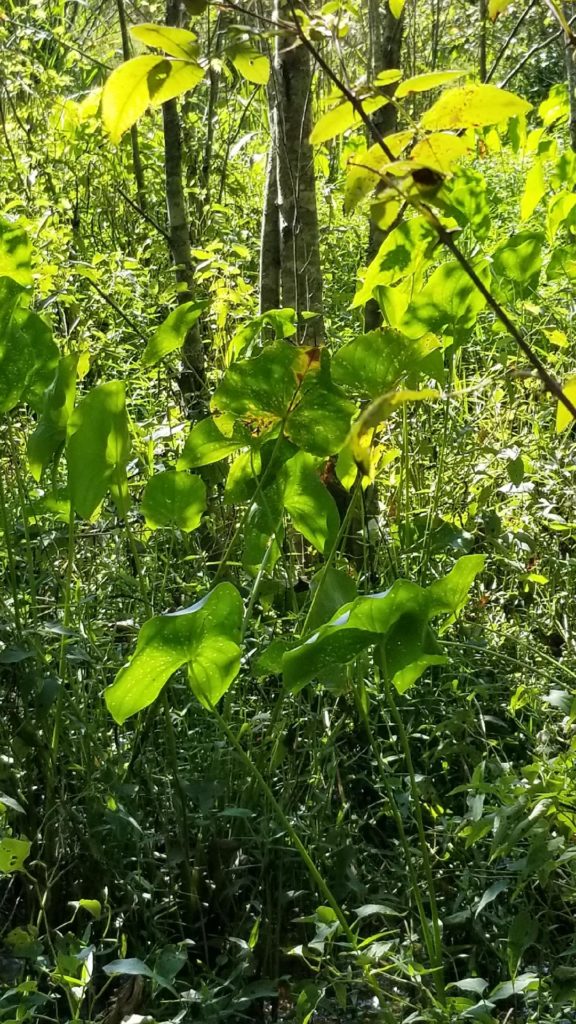 Clayborn surveyed the situation and realized the puppy would die without her help.

“There’s no way he could have made it through the mud on his own and ended up tangled around a tree like that.”

She told the SPCA of Wake County:

“I barely made it through the mud.”

She bravely waded through 100 feet of mud and took out her pocket knife to free the pup. Then she managed to get back across the swamp to the house with the much-relieved puppy.

Although the pup was overjoyed that Clayborn found him, he was also in really bad shape. In his struggles, the rope had worn deep into his little neck. His ears were badly infested with maggots, and she worked diligently to bathe him and remove the nasty bugs.

She believed if she hadn’t found him when she did, the local bobcats and coyotes would have:

“He probably would have been somebody’s snack.”

She took the dog to the SPCA, where a veterinarian tended to his wounds and discovered chemical burns on his ear and tail. The caregivers couldn’t tell how long the poor dog was tied to the tree but were hopeful he would recover. 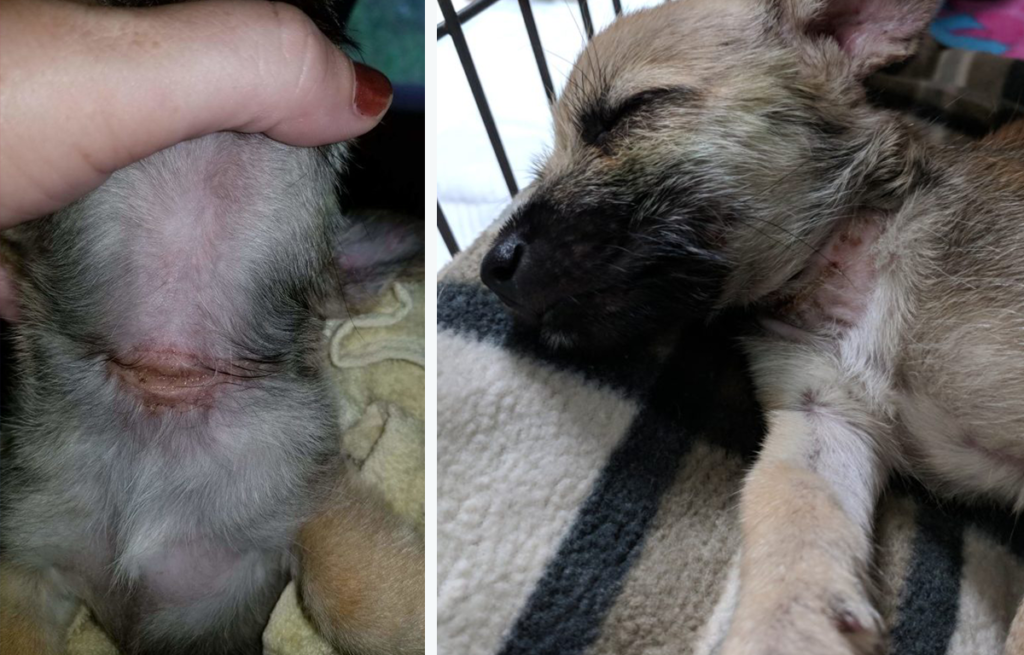 Nash, shortly after being rescued via SPCA of Wake County

Fortunately, the little dog, who is now named Nash, had made just enough noise to catch the ear of a brave woman who was willing to wade through the mud to follow his cries.

Now the SPCA of Wake County has given him such good care that he is making a fast recovery. 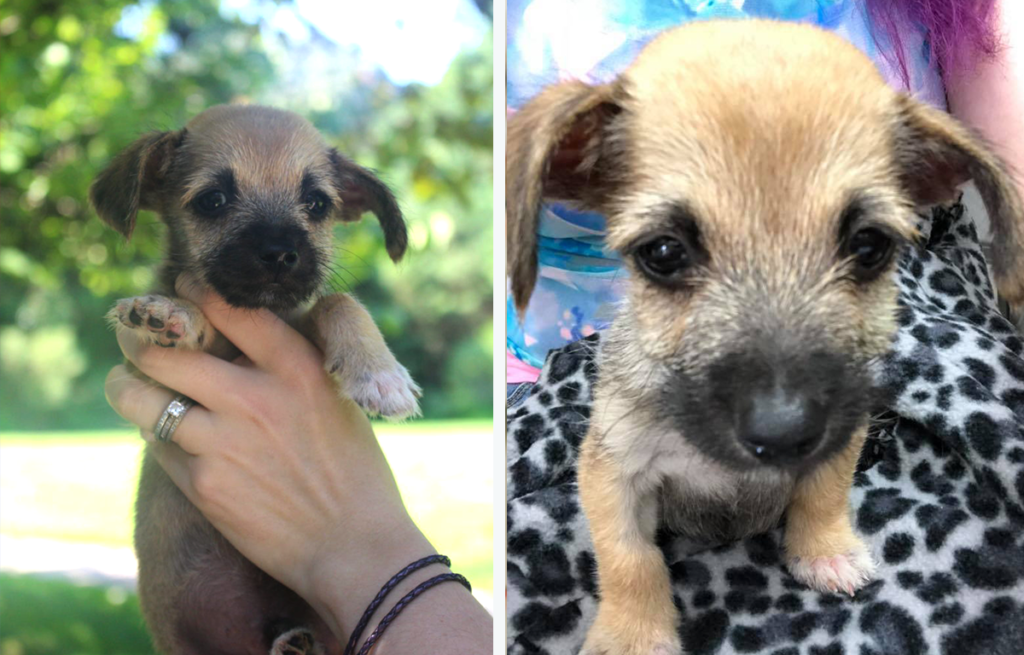 Nash, after care by Clayborn and the SPCA of Wake County

Nash is in a foster home and will soon be ready to find his forever home. He went from near-certain death on an island in a swamp to a bright future with a loving family.

If you would like to contribute to the wonderful folks at the SPCA of Wake County, you can do so at spcawake.org/helpnash.

Here is a recent video of Nash, looking like he’s loving life:

Video of Nash, the puppy found Tuesday tied to a tree in a swamp. Read his special story and see more photos: spcawake.org/nash