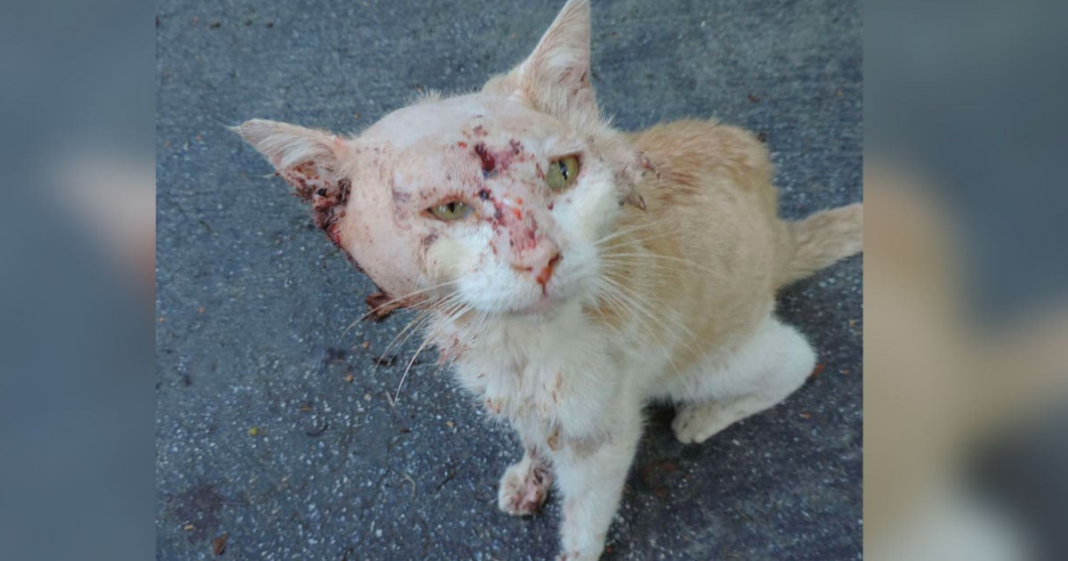 A cat that looked like it had been through hell showed up at the home of an animal lover named Pam Latham. Pam’s daughter Mallory told the story of the cat the vet dubbed “Battle Cat” on social media.

They say the name stuck because:

“…it was obvious this feline has barely survived some kind of epic battle.”

When he showed up on Pam’s carport, she didn’t even know what he was.

“What the heck is that?” she thought.

Battle Cat’s face was almost devoid of hair and he could barely see or hear from all the damage and swelling. He was bloody all over, not to mention the poor cat was covered in fleas during the hot South Carolina summer and skinny as a rail from starvation.

Despite being through total hell, Battle Cat had enough wits about him to approach the perfect caring person who would look after him. Although Pam wasn’t planning on taking of a cat, she knew she had to help him. 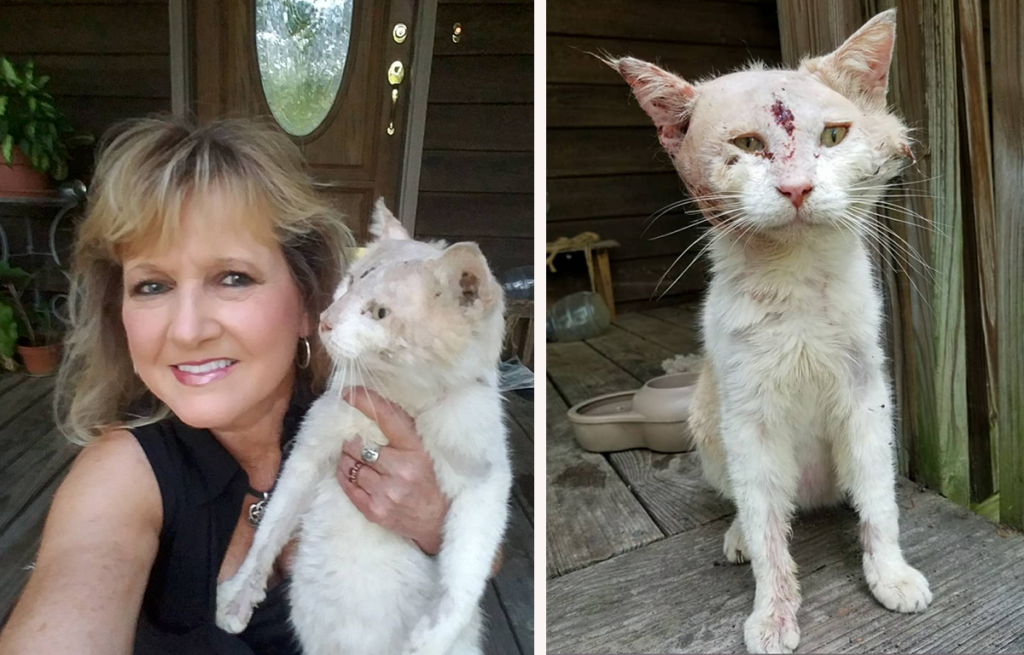 Battle Cat was waiting for her when she got home from work. Despite his bedraggled appearance, he won her over with his calm personality. She tried to clean him up, offered him food, water, and a comfortable bed for the night. The next day, she took him for extensive care at the veterinarian.

“[Pam] said he’s the sweetest thing ever & just purrs & puts his paw out wanting her to pet him. We think he was either in a fight or maybe got hit by a car. He doesn’t technically have a name so the vet was calling him Battle Cat lol,” wrote Mallory on Instagram.

This poor little guy showed up @ my mom's house in South Carolina yesterday looking like hell. His head was swollen & he had blood all over him & was missing a good bit of his hair. We're still unsure what happened to him. My mom took him to the vet today. They gave him an antibiotic & a rabies shot. They also tested him for FIV & FeLV & he was negative. He let her give him a bath too. She said he's the sweetest thing ever & just purrs & puts his paw out wanting her to pet him. We think he was either in a fight or maybe got hit by a car. He doesn't technically have a name so the vet was calling him Battle Cat lol. I told her to name him Crash or Holyfield (after the boxer) Anyways, I think he's gonna make it but I feel so bad for him & he may potentially be looking for a home in the future if he doesn't take over at my mom's lol. We shall see. ❤

Mallory created a GoFundMe to help her mother pay for all the vet bills. Battle Cat would need repeat checkups and face a long road to recovery. The veterinarian discovered he had a ruptured eardrum and multiple abscesses on his head. It was amazing Battle Cat survived at all.

As promised here's some new pics of "Battle Cat" my mom just sent me. She said he was waiting for her when she got home from work. He's so sweet! Hopefully he's starting to feel a little better & will start putting some weight on. Thanks for all the support & you guys offering help for him! I set up a gofundme & the link is in my profile! Anything helps & we really appreciate it! ❤❤

Battle Cat allowed Pam to give him baths, which is something few cats are cooperative with, even in full health. She fed him several times a day to fatten him up.

Just a couple weeks later, he was already looking like a new cat.

Pam wrote a story interpreting what Battle Cat must have been thinking:

“Now I know I’m not gonna win any beauty contest anytime soon, but this here cat is feeling so much better! I am on the mend and most of all, I feel loved!”

“This lady could have just as easily taken me and spent her money to have me “put to sleep,” but she and hopes that I would make it! I am glad she did and I am one grateful cat!!!” 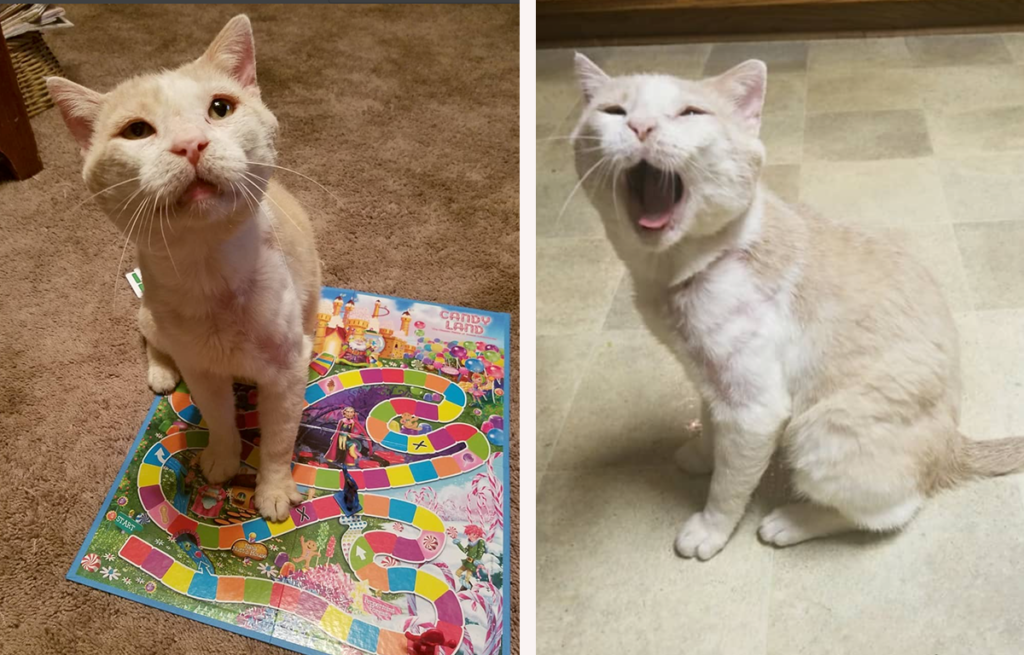 Battle Cat, after time in a loving and caring home via Instagram

She offered some words of encouragement, through Battle Cat’s eyes, for anyone who encounters a similarly desperate animal in need.

“I just want to say, if you ever come across another “critter” in my condition, a little love can go a long way! Don’t give up on us! We want to live too!”

In taking care of the beleaguered feline, both cat and human were better off for it.

“My life just keeps looking better and better and one day I hope my appearance will match! My new caregiver says through all of my battle scars she still sees a beautiful cat underneath and I am so thankful our paths crossed! She says that I have done as much for her as she has done for me!!!”

Now Battle Cat is living the good life, being loved and spoiled in the comforts of a safe home.

After over 83 days in her care, Pam adopted him and gave him a new official name, Lazarus.

“He runs my mom’s house now ? He is really so sweet though & so laid back considering he went through hell”

A message from Mr. Battle Cat himself. Seriously though thank you for all the love & support! He's got a ways to go but he'll get there. ❤❤