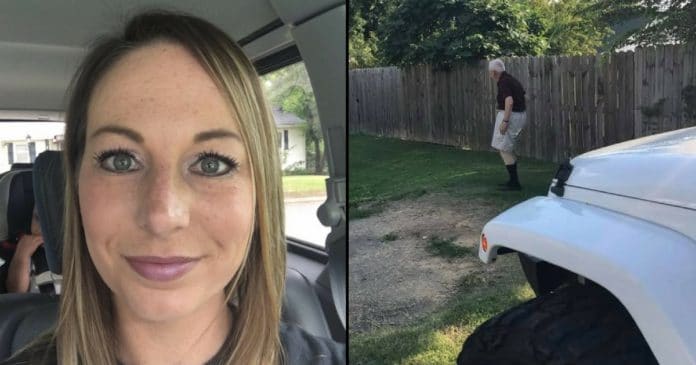 I’m sure you’ve heard it said before: “Good men are hard to find.” And unfortunately, that old adage tends to ring true quite often.

Our society has become full of people who feel entitled and don’t want to work hard. Boys aren’t taught how to be gentlemen, and we are left with lots of selfish and lazy men.

Perhaps because it’s so rare, when we hear stories of true men still out there showing what a man is supposed to look like, we can’t help but swoon.

That’s what happened when we heard this story from Tara Carter.

Tara had picked up some food with her family and they were on their way home when her husband, Chris, suddenly turned the jeep around and told her, “Take the food home and come back and get me.”

Tara didn’t know what Chris had seen that made him want to stop, but she said, “Okay,” and went to get in the driver’s seat.

That’s when she saw what had caught Chris’ attention. An elderly man was outside with a push mower trying to clean up his yard. Chris went over, took the mower from the gentleman, and proceeded to mow his lawn.

Tara was touched and so proud of Chris and what he had done.

Sadly, occurrences like these are so rare nowadays that they surprise us when we see them or hear about them, but we are so thankful that there are still good men like Chris in the world who were raised right and know how to treat others with kindness.

Hopefully not only the couple’s son, but many others too, will be inspired by Chris’ actions and seek out opportunities where they can lend a helping hand and show a little love!

Were you touched by what Chris did for this elderly man? So share this!