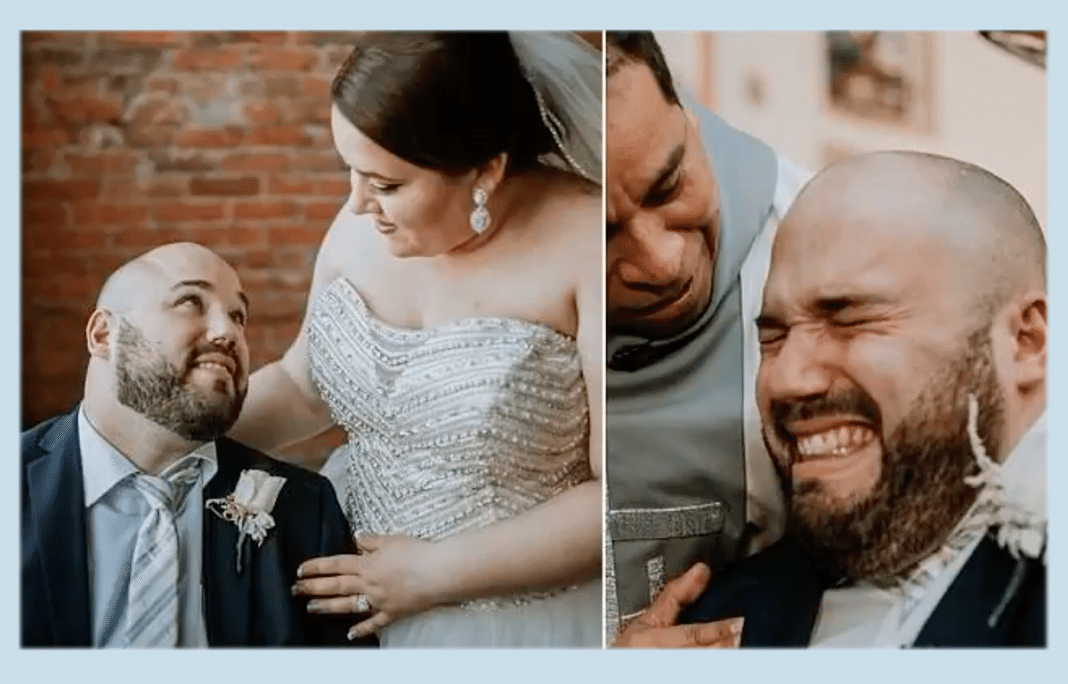 It was an emotional and touching moment as a 30-year-old groom, Justin Boisvert watched his bride-to-be coming down the aisle in their April wedding. Justin welled up with tears watching Sabrina Raposo, 27, in her bridal gown, ready to commit her life to him forever.

“I’m not an emotional guy, in fact, I’m quite the opposite,” Boisvert told SWNS.

“When I saw Sabrina walking down the aisle, I couldn’t help myself…”

“She caught me off guard. She took my breath away.”

The groom broke down in tears of joy, as you can see below:

The bride said had to hold back tears of her own:

“Seeing him cry, I was doing my best to hold myself together,” she says.

“But it was really nice to see him so emotional.”

The couple met on the internet in 2007, bonding over their love of ice hockey, though they were fans of rival teams. They quickly developed a friendship, but there was something that Boisvert worried would bring it to an end. He was born with cerebral palsy and requires a wheelchair in his daily life. He thought Sabrina would reject him if he told her.

“In my photos, you can’t really tell and because we met online I was really nervous about telling her. I thought she might be shocked or not want to go on the date anymore,” said Justin.

When he finally broke the news, his worst fears didn’t come true at all. Instead, she told Justin that it didn’t matter to her, even though some of her family and friends expressed their concerns about his disability.

“She was so down to earth and she accepted it with an open mind. The rest is history,” he said.

Sabrina recalled the moment she found out about her future husband’s disability:

“When first he told me he was in a wheelchair, I was a little bit caught off guard. I didn’t want to say no, I didn’t want to be that person. And at the end of the day, he was still human and a guy who I seemed to have a connection with.”

The next six years the couple proved to everyone that they truly loved each other and that they were meant to be. Family and friends got to know Justin and found out he was “just like everyone else.”

They became engaged in Niagara and later tied the knot in front of 150 guests, followed by a fun-filled reception.

Then the couple traveled to Mexico near Cancun for their honeymoon.

They swam with dolphins and snorkeled with the tropical fish. To start off their new life together, they shared an adventure they will never forget.

“It was paradise,” said Justin.