He Walks 17 Miles To Work Every Day. Then Stranger Takes Matters Into His Own Hands 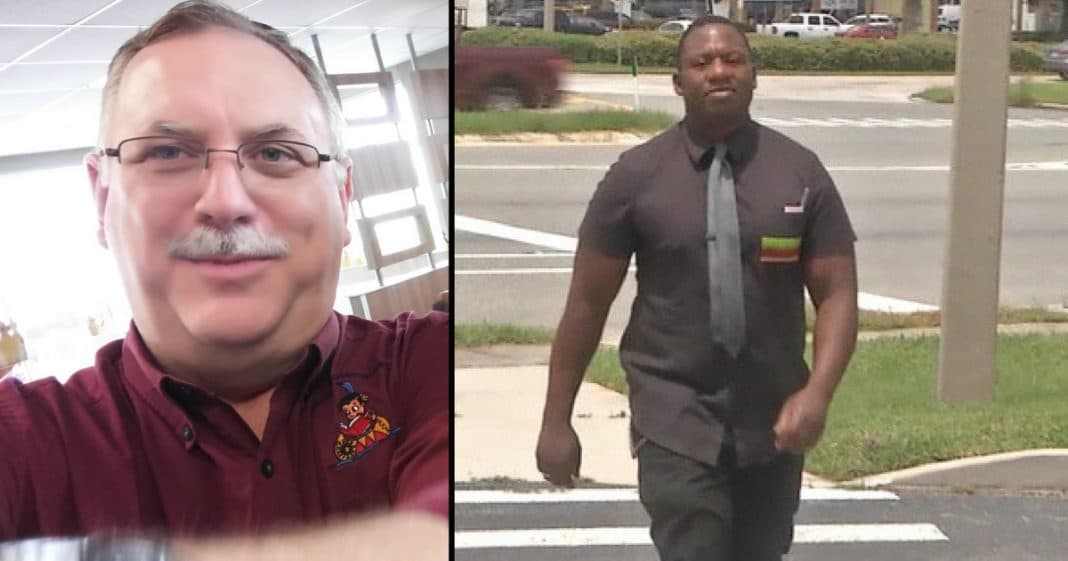 The adage “you do what you have to” rings true for many of us. Sometimes doing what we must to survive demands sacrifices.

Mike Aldridge knows this firsthand. He works as a shift manager at the Burger King located on U.S. Highway 441 in Eustis, Florida, but he lives in Umatilla, Florida. For the 36-year-old, his journey to work is a 17-mile walk both ways. It takes Aldridge about five hours to get from door-to-door.

Aldridge shrugs off this time as a slight inconvenience. “Hey, work’s work,” he said, “and you gotta do what you gotta do to make a living!”

Aldridge’s wife has epilepsy and can’t work, so the couple moved to Florida a short time ago to live with his sister. Aldridge couldn’t afford to buy a car, Uber is too expensive, and there aren’t any bus routes from his residence to his job, so walking was the only way to go.

Wes Locke, the principal at Spring Creek Charter School, was driving to work one day when he noticed Aldridge walking on the side of the road wearing black dress pants, a black shirt, and a tie.

“I thought to myself, he looks like he is headed to work but the closest business around there is about five miles away at least,” Locke said.

He stopped to see if Aldridge needed a ride, and he couldn’t believe what the man told him.

“I made a u-turn, rolled my window down and asked him if he was walking to work. He said yes. I asked where he worked. He said, ‘Burger King, in Eustis,’” Locke recalled. “Well, my jaw about hit the floor of my truck! That is 8.4 miles away from where we were! I said, ‘Are you serious?’…He says, ‘Yeah. I have no choice. Gotta get to work’.”

Locke gave Aldridge a ride to work that day and, over time, the two men came to be friends. Locke was so impressed with Aldridge’s work ethic that he decided he wanted to help out his new friend.

He started raising money to purchase a bike for Aldridge, but his efforts soon amassed more than $3,000. That’s when he decided that, instead of getting his friend a bike, he would get him a car.

Amazingly, Danny Len at Buick GMC of Mount Dora actually agreed to donate a car, so the money Locke raised will be used for Aldridge’s fuel, registration, and insurance.

Aldridge couldn’t believe his luck. Despite his good fortune, he has remained humbled by his friend’s generosity.

“It’s a blessing in disguise that you still have good people that look out and help you along the way for doing the best that you can and trying to do what’s right,” Aldridge said. “I’m happy! I’m very happy!”

We’re happy too! Locke didn’t need to offer Aldridge a ride, and when he heard the man’s story he didn’t need to raise funds to help him out, but he did. Locke’s selflessness, kindness, and compassion have made an incredible impact on one very grateful man.

Were you touched by what Locke did to help this hard-working man? So share this!