Waitress Thinks Grungy Man Is Being A Creep. When She Looks At Bill Later Almost Passes Out 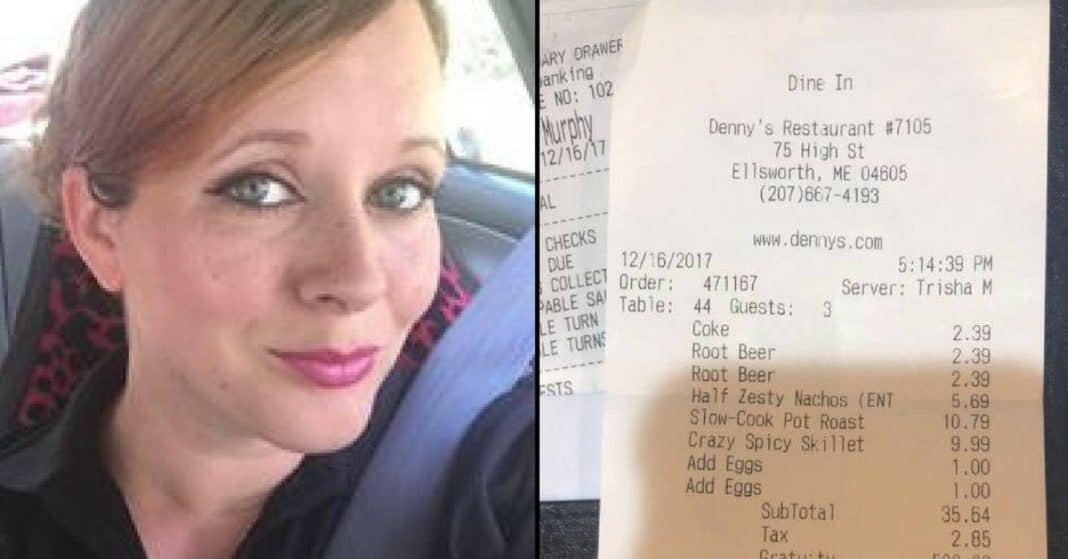 While I have found that to be true in some situations, over the years I have learned that often my first impression of someone is not the accurate one. I make a judgment based on a quick first meeting, but later they do or say something that makes me realize my first impression was totally off base.

That’s exactly what happened to Trisha Murphy the other day.

This season has not been an easy one for Trisha. She works as a waitress at Denny’s and at a nursing home. In addition to that, she is going to school, all while trying to raise her four kids on her own!

It seemed like everything was going wrong and she was struggling just to keep her head above water. As she went into work about a week before Christmas, she felt so overwhelmed that she didn’t know if she’d be able to make it through her shift.

“I was so stressed I could barely function,” she said. “Most of my Christmas shopping wasn’t done, my car got towed to Bangor (with a $735 bill on its head), and there’s only a week until Christmas.

“I went into work, racking my brain as to how I was going to pull this off. I can pick up a couple extra shifts and do some odd jobs. That would mean I’d have to pay extra for a sitter, though. I couldn’t even concentrate at work.”

Despite her own struggles, she put a smile on her face and tried to act like it was any other day. But then came another blow – the restaurant was practically empty.

“I thought for sure, I was screwed!” she said.

Then three men came in and sat down at one of her tables. They all looked kind-of grungy.

Trisha knew she probably wouldn’t be getting much of a tip from them, but she smiled and went over to take their order.

As she stood by their table, the older of the three men began to ask her about her Christmas plans. She told them she really only “did Christmas” for her kids – otherwise, she didn’t get into it that much.

The man joked that he’d come be Santa for her kids. Thinking he was hitting on her, Trisha led him to believe she was married and tried to carry on a pleasant – but “safely distant” – conversation.

At the end of their meal, Trisha brought the check over. Typically, customers take the check up to the hostess to pay, but the man insisted Trisha cash them out personally.

“I thought it a little odd, but obliged anyway,” she said.

She noticed that when the man put his card into the machine, he had a huge grin spread across his face. Trisha was a little confused but didn’t think too much of it until she saw what was printed on the receipt.

“The receipt printed, and I almost collapsed!” she said.

“I looked up at this grungy looking man, my face as white as snow, and tears in my eyes,” Trisha recalled. “He just smiled again and said, ‘Merry Christmas dear’, and almost danced out of the restaurant.”

Trisha doesn’t know the name of this generous man, but she does know that his kindness changed everything for her. And she has a theory of who he might actually be…

“I hope he realizes that he literally saved Christmas for my children and me!” she said. “Good people do still exist.

“Yesterday was the day I met Santa!”

Were you touched by what this kind man did for Trisha? So share this!