Waitress Gets $3000 Tip, Then She Realizes It Comes With 3 ‘Conditions’… 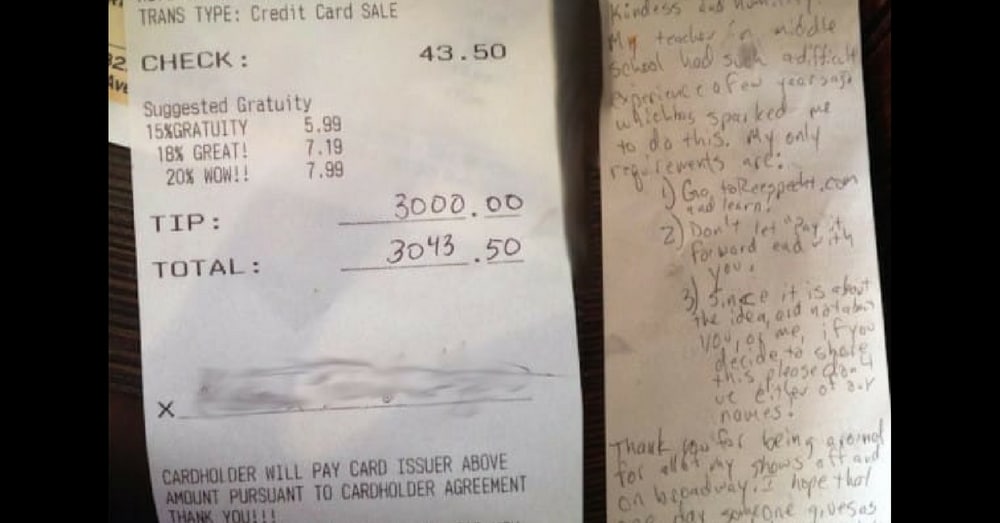 It was a typical day at a Times Square diner until one waitress found something on her receipt that left her speechless. A customer had left her a $3,000 tip on a $43 bill!

At first she couldn’t figure out why the anonymous customer would do such a thing, but when she turned the receipt over she found a note that changed her life forever.

Thank you for your kindness and humility. My teacher in middle school had such a difficult experience a few years ago, which has sparked me to do this. My only requirements are:

1.) Go to ReesSpechtLife.com and learn!

3.) Since it’s about the idea and not about you, or me, if you decide to share this, don’t use either of our names!

Thank you for being around for all of my shows on and off Broadway. I hope that someday someone gives as much love and happiness into the world as you do.

The waitress went to the website written on the receipt and found a tragic but inspiring story.

In 2012, teacher Richard Specht lost his son Rees when he drowned in a backyard pond just before his second birthday.

Specht and his wife were heartbroken beyond words, but instead of giving into the grief they decided to make something positive come out of their tragedy. They established the “ReesSpecht Life” memorial scholarship which aims to pay it forward and remind people of the importance of community, compassion, and respect.

The waitress ended up tracking down Specht to share what the customer had done. Amazingly Specht recognized the handwriting on the receipt as that of a student he had taught nearly 10 years before.

He said the boy would often come into his classroom to talk with him, but was shocked that he would still be thinking of him and his story all these years later.

“To think that someone I had a decade ago would honor my little boy, or even remember his eighth-grade science teacher in such a way, blows me away,” Specht said.

We know this waitress won’t let the act of kindness end with her. Let’s all “pay it forward” and share with others some of the blessings we ourselves have received!

Were you inspired by what this customer did and by Specht’s story? So share this!