Waitress Doesn’t Recognize Man At Table, But When She Sees Check…’I Almost Had A Heart Attack’ 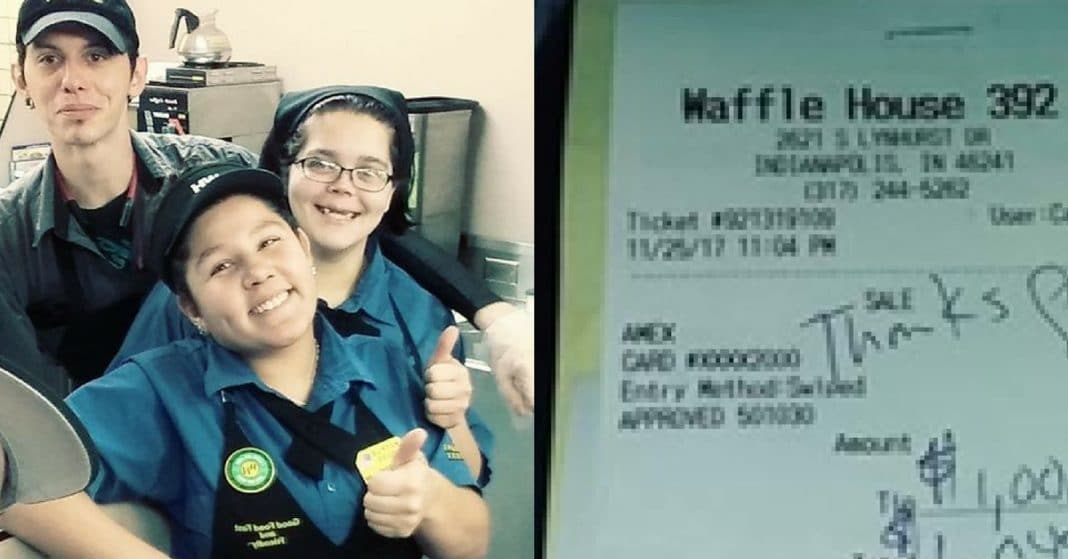 Servers, line cooks, and all restaurant staff work hard, and they mostly rely on the tips they receive from customers to pay the bills. They put in long hours on their feet rushing around taking orders and making sure their tables are filled and everyone is happy.

I don’t like seeing customers mistreat waitstaff. Some folks can be so rude to people who are just doing their jobs. Thankfully, there are other people out there who help balance out the rudeness by being generous tippers.

Celebrity Donnie Wahlberg is one of those people. He is well-known for frequenting Waffle Houses and for generously rewarding the waitstaff who serve his party.

We shared a story back in July about a time Wahlberg went to a Waffle House in Charlotte, North Carolina, and left the staff stunned when he gave them a $2,000 tip. It was an incredibly generous act, but it definitely wasn’t an isolated incident.

A @celtics win and a post game @WaffleHouse stop?! Thanks Indiana, for one heck of a father son #RoadTrip! #Celtics @KyrieIrving ☘️ pic.twitter.com/C5VvlJkRpy

Last weekend, Wahlberg and his son were in Indianapolis to watch the Celtics play. After the game, they went to a local Waffle House for some grub.

Kassandra Rhea was the lucky server who had Wahlberg’s table, though she didn’t know it at the time. She didn’t recognize the New Kids on the Block band member and Blue Bloods star – it took another family dining at the restaurant to point out to her that she had a celebrity at one of her tables.

“I just treated him like a normal, everyday person because that is what he is,” she said.

Kassandra may have treated Wahlberg like an average guy, but, in typical Wahlberg fashion, he wasn’t going to leave an average tip.

Kassandra was shocked when she saw the $1,000 tip Wahlberg left on the $48 bill.

“When I saw that tip amount, I almost had a heart attack,” she said. “That was a shocker, and it came at the greatest moment ever.”

Wahlberg requested that Kassandra share the tip with a cook and a server. He told her to give them each $200 and keep the remaining $600 for herself.

In her three months working at the Waffle House, Kassandra never expected to be so blessed and she couldn’t be more thankful for Wahlberg’s generosity. She intends to put the money toward rent and a new car.

Kassandra’s co-worker, Gayla Foley, said she was happy to see her friend get blessed in such an incredible way.

Wahlberg isn’t one to boast about his generous actions. He’s a low-key guy who doesn’t expect attention for his acts of kindness. Given his background of growing up poor, Wahlberg appreciates hard-working folks.

I wonder which Waffle House will be next to receive Wahlberg’s patronage. One thing’s for sure – he’s blessing people wherever he goes!

Were you touched by the kindness Wahlberg showed to the Waffle House staff? So share this!