Veteran And Wife Sleep In Freezing Cold, Left In Tears When Kids Tell Them House Is Theirs 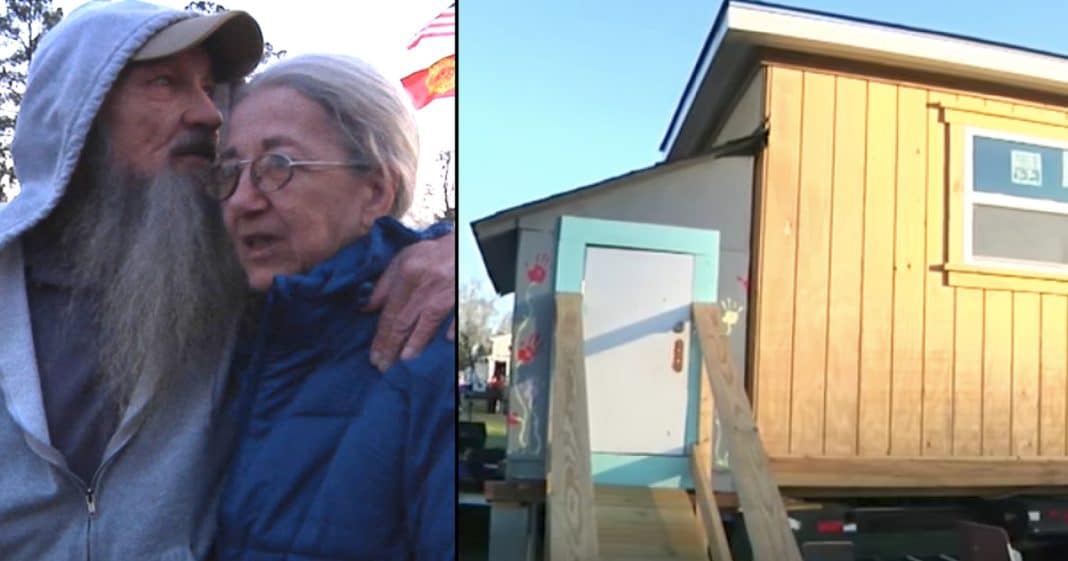 Veterans have given so much of themselves for the rest of us – their time, their families, their comfort, their safety – yet when they come home their sacrifices often go unrecognized. That’s why we love it when we hear stories like this one of people who give veterans the recognition and honor they deserve!

Navy veteran Eddie Browning and his wife, Cindy Browning, had been praying for a new home for a while. The camper they had been living in had fallen into disrepair and had been further damaged by a fire, but the couple couldn’t afford to make the necessary repairs. They were left largely exposed to the elements in the dead of winter.

Recently, though, their prayers were answered by a group of big-hearted students from Elm Street Elementary in Rome, Georgia.

The students had come up with an idea to build a tiny house for a homeless veteran. They started the project about a year ago, but ran into some roadblocks when they couldn’t find a place to legally put it.

But when organizers of the Georgia Tiny House Festival at Ooh La La Lavender Farms heard about the students’ predicament, they jumped in to help. They offered to let the kids store the house on the farm.

Then they took things a step further.

The students had originally planned to build a house that measured four feet by eight feet and fill it with a sleeping bag, supplies, and a propane heater. The house wouldn’t have plumbing or electricity.

But as word got out about their project, donors, volunteers, and corporate sponsors pitched in to help them add a larger extension onto the house, put in electricity and plumbing, and fill the house with amenities.

During the festival, the Brownings were escorted to the field where the tiny homes were displayed, thinking they would just be checking them out. When they were informed that one of the houses was actually theirs – and had been given to them by a group of kids, no less – they were overwhelmed.

“I don’t have the words to tell you what we feel,” Eddie said through tears.

They said they are excited to move in and escape the freezing elements that have been plaguing them in their old house.

After the festival, the house was brought to the Browning’s property in Norwood.

The project has been such a success that the school has decided they will try to donate a tiny house every year. If you would like to help support the work they are doing, you can mail donations to:

Were you touched by what these kids did for this veteran and his wife? So share this!