Veteran Thinks He’s Just Being Honored, But What Comes Through Tunnel Leaves Him Speechless 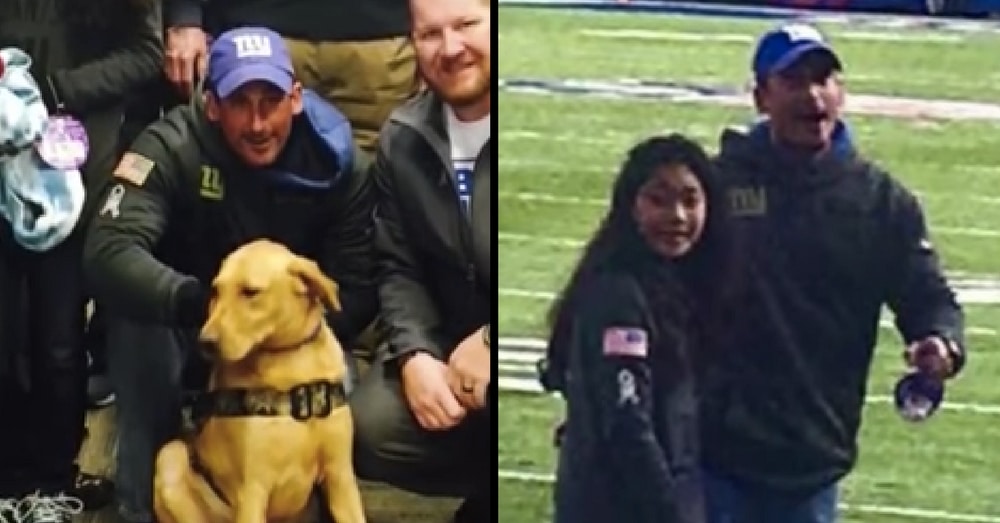 When Army veteran Steve DeVries was invited to be recognized at a Giant’s game as part of the NFL’s Salute to Service campaign he was honored, but he had no idea that his whole life was about to change.

DeVries has given a great deal to his country. He served as a combat medic during two tours in Iraq and was awarded several medals and honors for his service.

Those medals came at a price, though. When an IED went off under his vehicle in 2007 DeVries suffered a major spinal injury. He has had to undergo several surgeries on his back and often has difficulty moving around. He also suffers from anxiety.

While DeVries is happy to now be home with his wife and daughter, he has had a rough go of it. He had been wanting a service dog to help him out for a while, but had not been able to get one, even though he had been on the waiting list for 18 months.

During the halftime Military Moment at the Giants-Eagles game, DeVries walked out on the field with his daughter and waved to the crowd. Little did he know that a huge surprise awaited him…

As they stood there, a voice came over the speaker announcing that Semper K9, the United War Veterans Council, and the American Humane Team had a big surprise for DeVries!

Click below to see the emotional moment DeVries meets his new best friend!

Were you happy to see this veteran finally get the dog he had been wanting? So share this!