Veteran Finds WWII Helmet In Donations, Then Sees Name On The Front And Knows 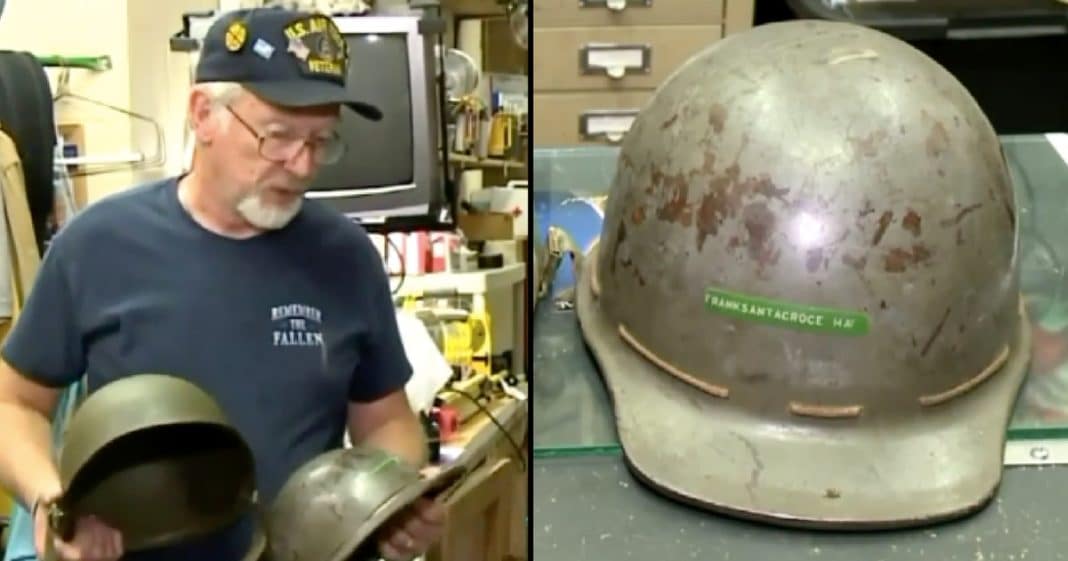 There’s a special, unspoken bond among veterans. They are connected by war and experiences that only fellow comrades can relate to. Get a room of vets together from the various wars, and they’ll chat for hours, sharing their stories.

Last year, Air Force veteran Albert Compoly was sorting through donations at a local Catholic church. He came across a WWII helmet.

“People bring stuff in and at some point, I was rummaging through and just sorting things out, and I  found this old helmet,” Albert said. “So, being a veteran, I took it aside and hung it up on my wall.”

The helmet obviously meant something to Albert. He respected the item and its former owner. Perhaps whoever had donated it didn’t know it had once belonged to a soldier who might be searching for it.

After taking it home, Albert noticed there was a name on the front. The helmet once belonged to a soldier named Frank Santacroce.

Albert wondered if Mr. Santacroce was still alive. He figured the helmet would still, after all these years, have sentimental value to his fellow veteran, so he took to the internet and searched for the WWII veteran.

Unfortunately, Frank Santacroce had passed away in 2009. All was not lost though; at the end of the vet’s obituary was the name of Santacroce’s daughter. Albert did more research and found her contact information. He then got in touch with her and informed her he had her late father’s WWII helmet that he would love to pass along to her family.

“She couldn’t believe it,” Albert said. “She said it was like part of her father coming back home again.”

How relieved the Santacroce family must be to have this little piece of their beloved Frank returned to them. A museum in Sag Harbor, New York, will house both his helmet and uniform. They will proudly be displayed for all who tour the site.

Albert explained what could have happened to the helmet if he hadn’t claimed it: “It would have been thrown out if someone didn’t want it, so we were happy we were able to sort of rescue it.”

How kind of Albert to save and return a fellow veteran’s helmet. Only a fellow vet would know how important something so simple would be to another vet or their family.

Were you touched by all that Albert did to make sure this helmet got back to its rightful owner? So share this!