Veteran Dies With No Family Or Friends, But Then These 6 Teenage Boys Step Forward… 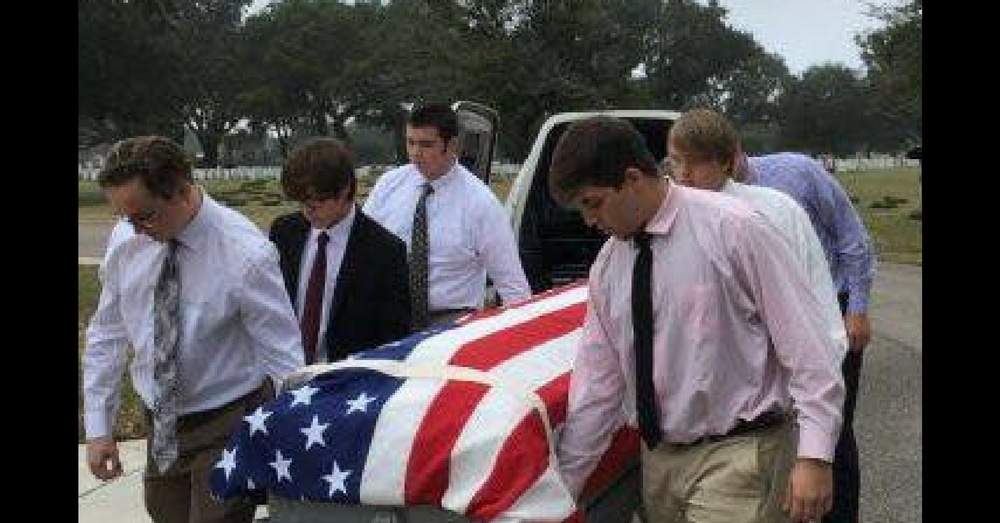 Jerry Wayne Pino was born in Baton Rouge, Louisiana and joined the Navy in New Orleans. He served as a petty officer third class in Vietnam. At the age of 70 he passed away in Long Beach, Mississippi.

That’s all anyone knows of Pino. He died alone. No friends, no family.

After he passed his body lay unclaimed at Riemann Family Funeral Homes for weeks.

“No one stepped forward,” funeral home worker Cathy Warden said. “He just didn’t have any family.”

The funeral home wasn’t sure what to do with the body, but when Cathy explained the situation to her colleague – and a veteran herself – Eva Boomer, they decided they needed to do something to make sure this veteran got the proper honors he deserved.

“Something had to be done with respect,” Cathy said. “We had to give him what he deserved. Nobody should go alone.”

Eva came up with the idea of asking some of the boys from the local high school if they would be willing to serve as pallbearers. It was a long shot, since the students were on Christmas break, but Cathy called her son, who was a student there, and asked him to text some of his friends.

Within minutes six young men had volunteered to serve at the veteran’s funeral.

“It was the right thing to do,” 17-year-old Bailey Griffin said later. “He served our country. He fought for our rights. For him to be buried with nobody there was just sad. I told myself I was going to do it and I did it.”

On the day of the funeral the boys arrived dressed in khaki pants, button down shirts, and ties. They solemnly carried the flag-draped casket to the gravesite.

“I went out there for the service and cried the whole way through,” Cathy said. “He had no one there. This veteran had nobody standing there but these boys.”

After the service the flag that had been draped over the coffin was folded and presented to the boys.

The parents of the young men couldn’t be prouder of what their sons did for this veteran. If anything, their actions are proof that these parents are raising their sons right.

One of the boy’s mothers, Stacie Tripp, wrote on Facebook, “Proud mom when he told me that no one should be buried without people who care present, especially a veteran.”

This veteran may not have had anyone at the end of his life, but in death he was surrounded by some everyday heroes who will make sure his memory lives on.

Were you touched by what these young men did for this veteran? So share this!