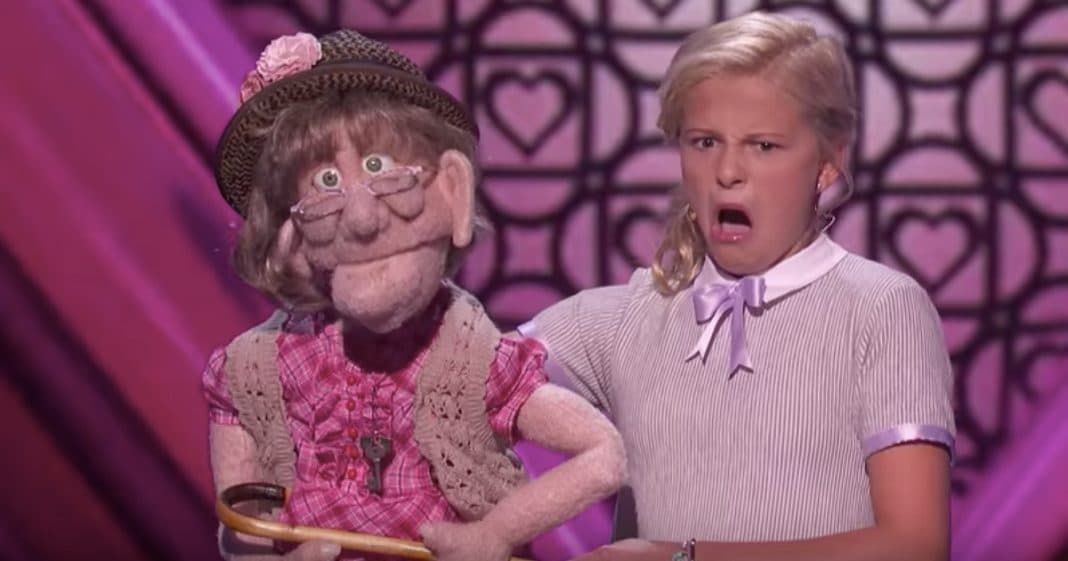 12-year-old Darci Lynne Farmer has been an America’s Got Talent favorite ever since she walked out onto that stage in May. The adorable and incredibly talented young lady revealed that she got into ventriloquism to help her get over her extreme shyness, and it looks like her plan worked!

Her first performance, with rabbit puppet Petunia, left the audience and judges in awe with her skill that would put many professionals to shame. After waiting months for the rest of the auditions to be complete, we finally got to see her perform again – this time with Oscar the mouse who, much to the audience’s delight, declared his love for judge Mel B and serenaded her with The Jackson 5’s “Who’s Lovin’ You.”

Now she has introduced us to yet another character – a sassy elderly woman named Edna. As soon as Darci went to get Edna out of her box, it was clear we were in for quite the show as Edna began to fling her cane around, complaining about how uncomfortable she was.

Then she asked where Simon was. When Darci pointed the notoriously curmudgeonly judge out, Edna told her, “He’s a hit with the ladies in their 80s back at the home, you know.”

Shocked, Darci pointed out the big age gap between the two of them and told Edna that Simon might give her a heart attack.

Darci already had the audience in stitches, but she was about to leave them in awe as Edna broke into a cover of Aretha Franklin’s hit “(You Make Me Feel Like) A Natural Woman.”

I don’t know about you, but I can’t sing like that normally – there’s no way I could do it without moving my mouth!

It’s clear young Darci Lynn is incredibly talented and has a bright future ahead of her, and the judges agree.

Simon, who blushed throughout the performance and couldn’t stop laughing, said, “Edna, I’ve got a bit of a crush on you. Darci, you are in big trouble, but that aside, this was brilliant. And let me tell you why it was brilliant, because you’re funny and you’ve got a wicked sense of humor.”

He then imagined what this bright young star’s future could look like.

“I’m imagining in my head now, kind of a ‘Sesame Street’ type of show for you,” he said. “I think you are heading, when I say the big time, this is big, this is where you’re heading, young lady.”

“The first moment you walked onto this stage, I was just mesmerized,” said judge Mel B. “You’re self-taught, you’re 12 years old, I hit that Golden Buzzer and I said to myself, ‘She can easily, easily win this show, 100 percent. 100 percent.’ You’ve just got what it takes.”

“This is amazing,” Howie Mandel concurred. “What a night. This has been one of the most amazing nights we’ve ever had on ‘AGT.’ You, young lady, have a great chance of winning it. It’s amazing.”

Then, not about to let Simon get away without a little jab, he quipped, “I think Simon, you’re amazing, that you can actually make a puppet feel like a natural woman!”

Darci is a fan favorite this season and it’s not hard to see why. We can’t wait to see what happens with the rest of this season!

Were you impressed with Darci’s performance? So share this!