University Surprises Mom Who Attended Every Class With Quadriplegic Son 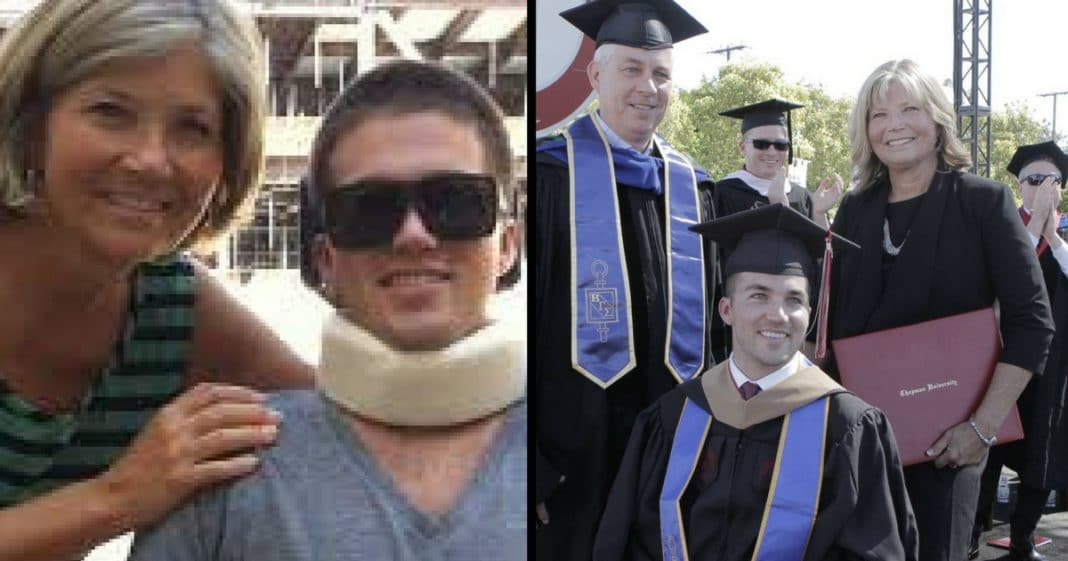 What would we do without our moms? Time and again they show up for us, sacrifice for us, and go above and beyond to show us they love us.

Now one mom is getting recognized for the incredible lengths she went to to make sure her son was able to fulfill his dreams.

Marty O’Connor had been out of college for two years when he fell down a flight of stairs and ended up paralyzed. He started doing physical therapy five times a week, which helped him physically, but he felt lost mentally.

That’s when he decided to set the goal of going to grad school, and with a $10,000 annual scholarship from Swim with Mike, an organization started to benefit USC All-American swimmer Mike Nyeholt, who was paralyzed in a motorcycle crash in 1981, it looked like he was on his way to meeting that goal.

There was just one problem. While Marty could use voice recognition software and other aids to do his assignments, he couldn’t take notes during class or write out his test answers.

That’s where his mom came in.

Judy O’Connor, a retired elementary school teacher, attended every single class with her son and took notes for him as he worked toward his master’s of business administration degree at Chapman University in Orange, California.

On Saturday, it was finally time for Marty to received his hard-earned degree, but as Judy pushed his wheelchair across the stage she had no idea she was in for the surprise – and honor – of a lifetime.

The announcer herself began to choke up as she read about the decision by the faculty, administration, and board of trustees to award Judy an honorary degree.

“Mrs. Judith O’Connor has attended all the classes with her son Marty,” the announcer said. “She has taken notes and worked with Marty throughout his academic career.”

Judy found out later that it had actually been Marty’s idea for her to be awarded the degree, and she was both touched and overwhelmed by the gesture. She smiled and posed for photos with her son before blowing a kiss to the crowd.

Judy said the whole experience was a pleasure and worth all the time and effort.

“I’m a geek. I love being in school,” she said later. “I’m not going to lie. I’ve enjoyed every minute of it.”

Were you touched by what Judy did for her son? So share this!