Twins Try To Sell Beloved Bear But No One Will Help. Then Angelina Jolie Stops By… 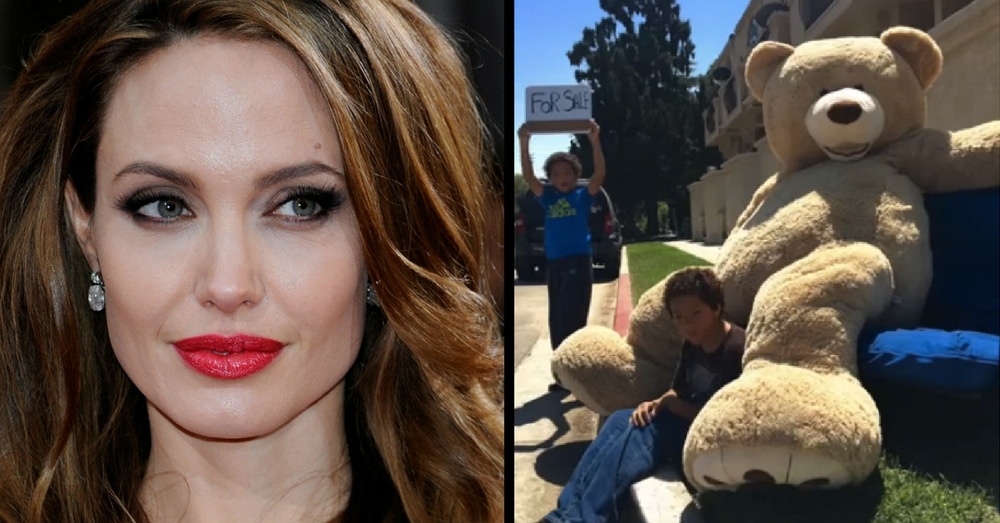 Twins Allen and Brandon Alexander had grown up with a beloved stuffed bear they called AG. They loved the huge, 8 1/2 foot tall bear, and would often even sleep on him, but as they got older they decided they had outgrown him.

Their dad, Tim, decided to teach them a lesson in entrepreneurship by having them sell the bear themselves. They took the massive stuffed animal out to the street by their house with a sign saying they were selling it.

Unfortunately, no one seemed interested. The boys waited outside for over an hour, but not one car stopped by.

Just as they were starting to feel defeated, though, a white Cadillac drove up and a woman got out. The boys were so excited to finally have a buyer that they didn’t even recognize the woman.

It was megastar Angelina Jolie!

While the boys didn’t recognize the actress and director, their parents sure did. They couldn’t believe that a big Hollywood star would pull over to buy their kids’ stuffed animal!

The boys told Jolie they were asking $50 for the bear. They expected her to start haggling with them and were prepared to go as low as $40, but she surprised them by giving them $50 each!

At the time the boys were more excited about the sale than the actual buyer, but their dad caught the whole thing on camera so they’ll be able to look back and remember the star’s act of kindness.

It’s always nice to see celebrities use their positions to help others! Check out the surprise interaction below:

Were you surprised to see Angelina Jolie show up to buy the boys’ bear? So share this!