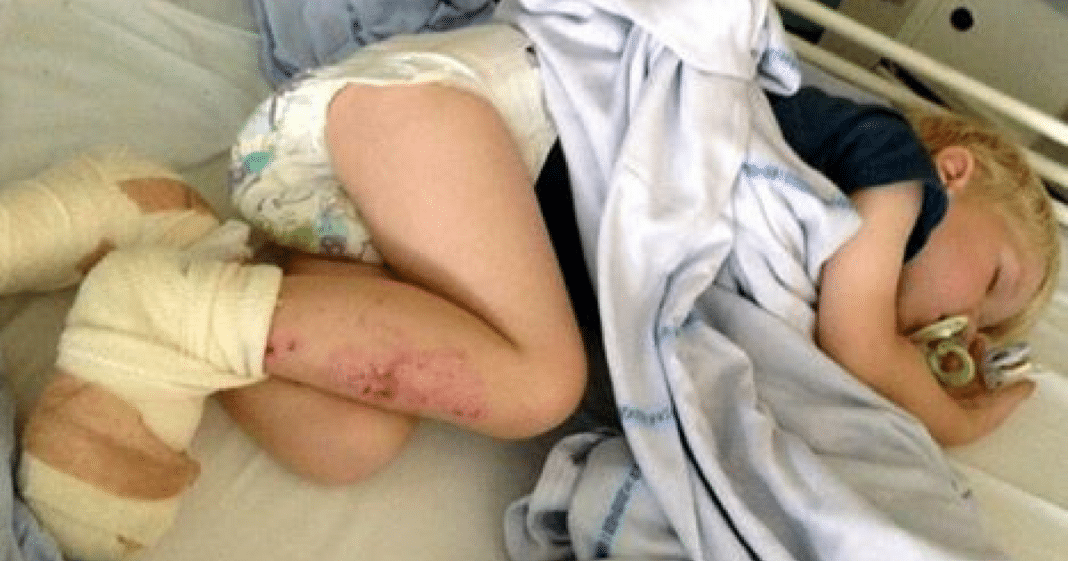 While out with their children, parents do all they can to prepare for whatever they could encounter. A trip to the beach requires plenty of sunscreen, life jackets, floaties, and water. Perhaps a picnic basket with a healthy lunch packed inside too is also a smart idea. Sometimes, however, parents can’t foresee everything. Such was the case for Katja Kafling Wichmann, a mother from Denmark.

Her son, Jakob was 3-years-old in 2013 at the time an event at the beach turns his life, and his family upside down. Katja heard of another man experiencing the same horrific events poor Jakob did; she wanted to let as many people know of the hidden dangers found beneath the sand. So she posted a picture of Jakob’s feet on social media and her photo went viral.

It all started one day while she and Jakob were at the beach. Her little boy was playing happily in the sand. Little did this mother know she’d be rushing her little boy to the emergency room. Jakob’s feet were burnt, so terribly the skin was falling off.

Hiding beneath the sand’s surface were embers from a fire someone had on the beach the previous evening. It’s not believed the fire was set maliciously. People use sand to put out beach fires. Rather than extinguishing the flames, the sand retains the heat. The embers become even hotter.

Dr. Marianne Cinat of UCI’s Regional Burn Center had this to say about using sand to snuff out beach fires. “Sand locks in heat, making smoldering coals even hotter.”

Poor Jakob’s burns were so severe; he almost lost his toes. Doctors used skin from his thighs to graft and repair his toes. His recovery took a year. Many doctors visits, pain and rehabilitation could’ve been prevented if the beachgoers used water to put out their fire instead of sand.

Jakob is now 7 and doing fine. Even if you don’t frequent the beach often, please share this story with your friends. Everyone should be warned of the dangers buried in the sand. No one should experience what little Jakob has. A trip to the beach should be filled with fun in the sun and sand, not pain and a trip to the hospital.