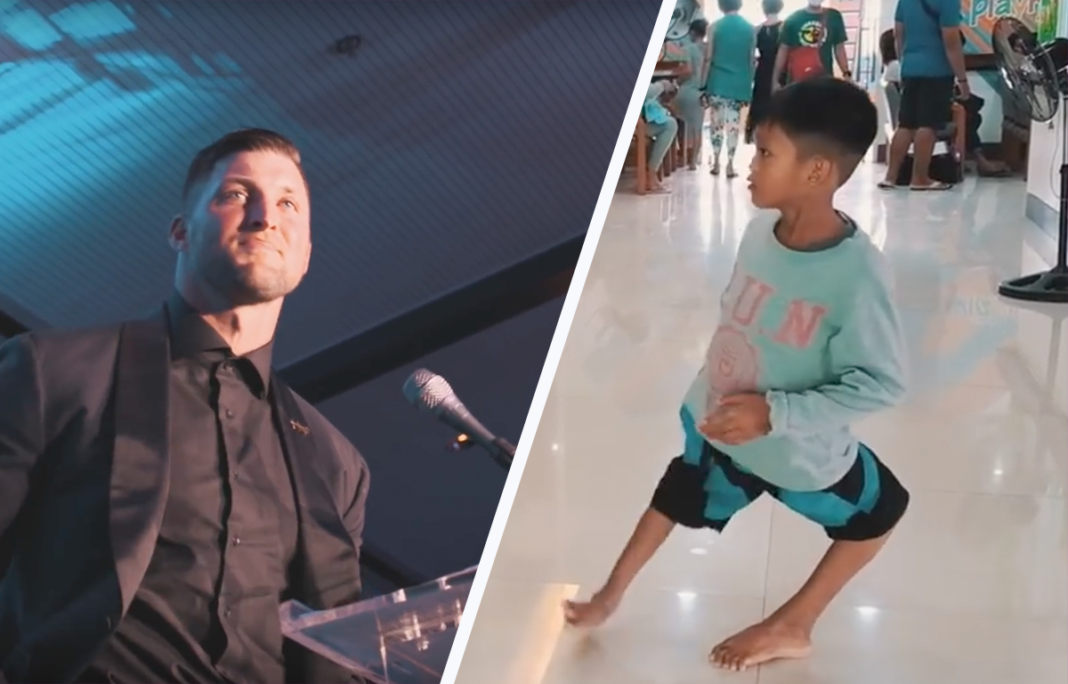 Fifteen years ago, Tim Tebow knew what his life’s mission would be when he met a boy named Sherwin who had been born with his feet literally on backward in the Philipines in a remote jungle. Villagers thought the boy had been cursed and shunned him but Tebow believes that every child is precious in God’s eyes.

How can one life change another?

Check out Aldrin’s journey of healing and how he was impacted by the life of Sherwin, a boy @TimTebow met while on a Philippines mission trip 15 years ago: https://t.co/iJWRXGB993

“I got to be able to carry him and just share with the village that he’s not cursed, that he’s loved by God,” said Tebow.

Tebow knew that he had to do something to help the boy.

“He was born that way, and I knew after meeting him what I want to do with my life is fight for people who can’t fight for themselves,” said Tebow.

Tebow was born in the Philipines and loves the Filipino people. Now it’s his life’s mission to help kids like Sherwin.

“I grew up here in the early stages of my life. I love the Filipino people – they’re some of the friendliest, warmest, nicest people in the world. And, to be able to come back here and care for them and love them, well it’s truly a dream come true.”

Tebow wasn’t all talk. He always remembered Sherwin, even after he went on to become a famous NFL football player and professional baseball outfielder with the New York Mets.

He used his celebrity and influence to launch the Tebow CURE Hospital in Davao City, Philippines in 2014. The facility provides life-saving surgeries on people who would have no access to medical care otherwise.

Today, he had the chance to help a boy who, like Sherwin, was born with a congenital defect. His knees bent the wrong ways, “like a flamingo” as Dr. Tim Mead, a CURE on-staff surgeon noted.

The boy’s name is Aldrin.

Aldrin, who was born with congenital knee dislocation, is learning how to walk after undergoing a 4-hour surgery to repair and realign his tendons, joints and bones.https://t.co/bmm2IHGY2M

Like Sherwin, Aldrin was bullied at school because of his deformity. Thanks to the hospital Tebow created, he was able to receive surgeries. The procedures were intensive and complicated, but he came out of it with legs that will function normally after physical therapy and lots of hard and often painful work.

The Tim Tebow Foundation called it a “journey to healing – both physically & spiritually!” According to Tebow, Aldrin found his Christian faith during the process as well.

For now, he can only stand for ten minutes at a time until his legs start hurting, but he has a newfound confidence and limitless ambitions for life. His classmates have started to accept him and stopped bullying, although they certainly shouldn’t have done so in the first place.

“I have so many friends at home! And when I am not in school, I just play with my friends a lot! I also like to play with legos and build them together, because someday, I would like to become an engineer,” Aldrin said.

Because of what happened, Aldrin now believes that anything is possible.

“If I could be a superhero, I’d like to be Superman because he can fly!” shares Aldrin.

He would go on to encourage another child born with the same deformity that he had, a little girl in Kenya named Rosaline.

She was about the begin the same grueling round of surgeries.

“Aldrin, your surgery is over," said OR Nurse Jaime. Aldrin then responded, "Only by the grace of God," to which we exclaimed, "Amen!" This is what we do every day. #MondayMotivation https://hubs.ly/H09VkkR0

“Thank you, Sherwin. One life truly can change another,” said Aldrin.

Watch Tim Tebow talk about Sherwin and Aldrin below: