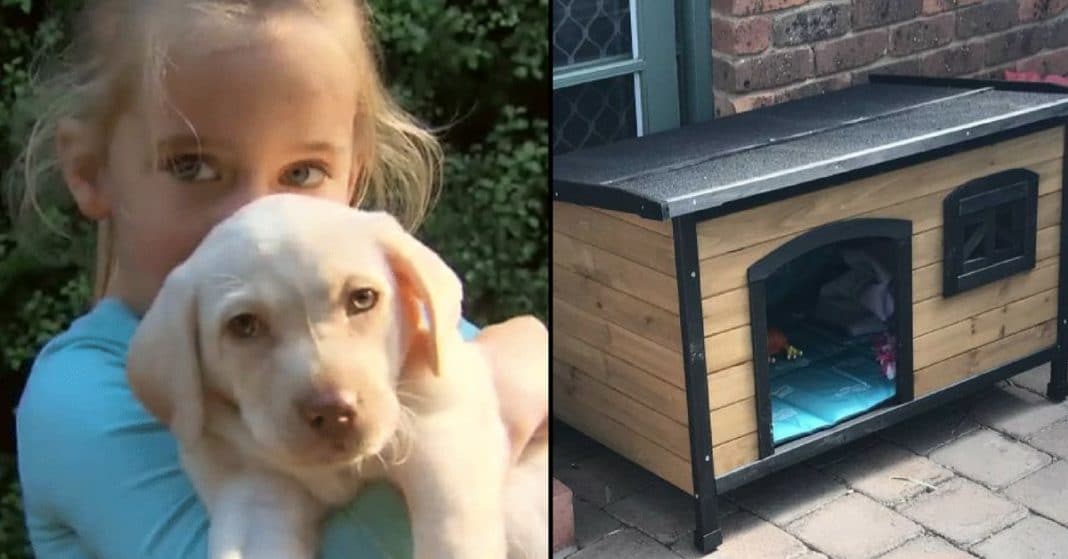 When a child receives a puppy, it’s the beginning of learning how to care for something that is alive and the start of a beautiful friendship. They form an unbreakable bond where kisses and cuddles are exchanged, intensifying this relationship.

Tossing a ball, cleaning up messes, and caring for the pet come with the territory, but most children don’t complain about the increase of chores. They love their new furry pal because they are adored in return.

It saddens me to hear stories about children who suffer because of an adult’s selfish or stupid actions. Children, unfortunately, can be collateral damage for crimes, but they don’t understand why something has happened to them or their family and might even wonder what they’ve done wrong.

Sasha had only been with her new family for about a week, but for the girl and dog, it felt like they had known each other forever.

Maia loved Sasha. The little girl was all smiles around her new friend. Come bedtime, Maia would curl up next to Sasha in her dog bed, providing comfort and protection while she slept.

This happiness didn’t last long, though. On November 6, Maia and her mom, Elena Sardi, left their home to run errands. To their horror, when they returned a few hours later, they discovered their home had been burglarized.

The thief or thieves stole an iPad, a laptop, and jewelry. Even more heinous, they also took sweet Sasha.

The family filed a police report and turned to the public to see if anyone could help bring their Sasha back home.

“How can you explain to a four-year-old that one of your family members has been taken?” Sardi’s husband, Ryan Hood, asked. “It’s really difficult.”

Every room in their home reminded Maia of Sasha and how she was no longer there.

“I can still smell the dog,” the little girl said, her cheeks wet with tears.

The family had ensured Sasha was microchipped and they held out hope she’d be found. But as days passed, their hope dwindled.

The story of the kidnapped puppy captured the hearts of the public. People were taken with the sad little girl wishing for her puppy to return home.

Can you help reunite 8-week-old pup Sasha with its owners? pic.twitter.com/aDb2i1jDkZ

Then, a few days later on November 9, Maia’s mother made an awesome discovery that had her yelling with excitement.

“We didn’t want to get our hopes up,” Ryan told Australia Today. “And then this morning, my wife got up to make herself a coffee, walked past the sliding door, and noticed that there was a figure moving by the kennel.”

Considering her ordeal, the pup was in good health. The family was overjoyed to have her back.

Who knows how the pup found her way back to her worried family. Perhaps the thieves had a twinge of conscience? Maybe it was all the public attention given to the stolen puppy that forced them to return her.

No one (besides the thief) knows where Sasha spent the better part of three days. All that matters is she’s home where she belongs.

“We think that whoever took her has either has a conscience or got scared and just dropped her over the fence,” Ryan said. “We don’t care, to be honest, we’re just glad to have her back.”

“Labrador Sasha is home! What a great start to the day for this family, reuniting with their stolen pup.”

Labrador Sasha is home! What a great start to the day for this family, reuniting with their stolen pup. Read more ➜ https://t.co/lGdYPQvbB4 pic.twitter.com/CwLuRcNmHk

Police are still searching for the thieves. None of the other stolen items have been returned.

“It’s a bit of a strange one,” Leggo told ABC News. “It’s difficult to understand what they were thinking.”

Little Maia had no comment. None was necessary. Seeing her playfully dance across the floor, Sasha in tow, was all anyone needed to know how utterly happy she was to have her best mate back.

We are thrilled for Maia and her family. Losing Sasha had to be frightening and heartwrenching for all of them. While we hope the thief or thieves are found and brought to justice, for now we are glad that Sasha and Maia have been reunited.

Were you happy to see this little girl and her puppy reunited? So share this!