Thieves Take Off After Stealing Valentine’s Gifts From Family, Then 2 Strangers Open Their Car Doors 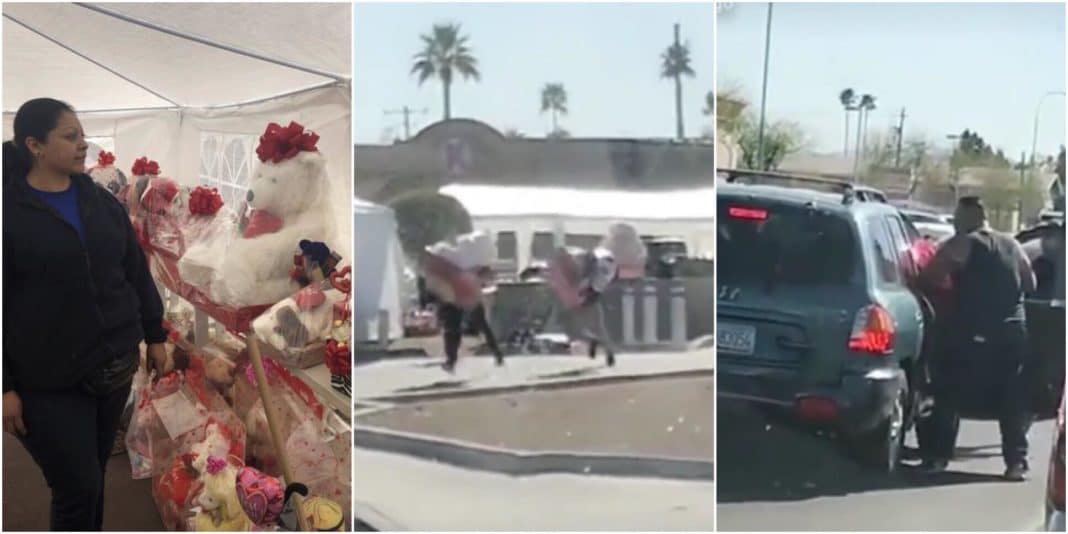 Valentine’s Day is this week. What will you give your special someone or someones? Candy? Chocolate? Flowers? A teddy bear? Will you prepare them their favorite meal? Draw them a scented bath? Some people in Phoenix, Arizona resorted to stealing gifts for their sweethearts instead of paying for them.

I don’t know about you, but I wouldn’t want something that was stolen. It certainly wouldn’t make me feel the love at all! Thanks to the intervention of two bystanders, the kidnapped teddy bears were returned to the roadside stand.

A Snapchat video that was posted to Reddit has gone viral. The clip shows two thieves running toward a roadside valentine’s gift stand. They took two bears. Their getaway wasn’t as smooth as they’d hoped. After dashing away to a waiting vehicle, they were stopped at the light at the corner.

According to the workers at the stand, two men in another car observed the entire event. These men confronted the thieves in the getaway car. They opened the car doors; the stolen merchandise was retrieved.

“The people that were in front got out of their car and forcibly took the bears back,” Aylin  Villegas, a worker at the stand said. “There was no fighting.”

17-year-old Villegas and her family run the yearly stand. In the six years they’ve been there, they’ve never had anything taken. They are grateful for the two men who came to their aid. They’re also relieved that no weapons were used.

“Personally, I would like to say thank you,” Villegas translated for her mother Erika Gonzalez, who spoke in Spanish. “Because they risked their lives, their safety to help us. It’s a sign that there  are still good people out there, honest people.”

The family one day hopes to open a flower shop or to get a permanent location to sell gifts. They won’t reach their dream if folks continue stealing from them. Two days after the two thieves attempted to get away with the bears, one man did manage to take a bear. He stole it in the same manner as the previous thieves. Though how he managed to get away with a 10-foot bear is beyond us. That bit of merchandise cost $300, money the family can’t put toward their dream business.

“You’re going to give your loved ones something that is stolen?” Gonzalez said. “How does that make you feel? Taking it from us?”

They’ve now had to resort to using a tarp to not only protect their merchandise from the elements but potential thieves as well. This is beyond pathetic. This shop is someone’s livelihood. How dare these people think it’s okay to take from them.