Lioness Walks By With Baby Antelope In Mouth, But Onlookers Weren’t Prepared For What Happens Next 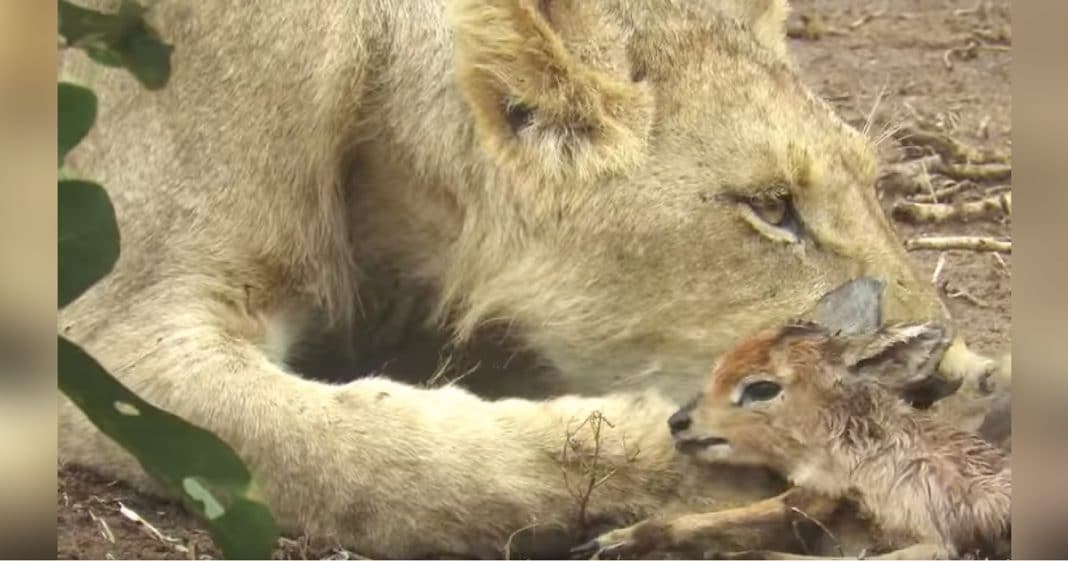 Graeme Mitchley and his wife were enjoying one of their favorite spots in South Africa – Kruger National Park – when they noticed something moving along the riverbed. They had not seen much wildlife that day, but what they were about to witness was something extraordinary.

On the top of their wish list of what they hoped to see at the park were some of the estimated 1,800 lions that live there, but they hadn’t been able to find any.

“I commented to my wife that I would love to know where they had all got to,” said Graeme. “A few minutes later, out of nowhere, a lion came walking out of the dry bush with something in its mouth.”

They were excited to see what they at first believed was a lioness carrying her cub in her mouth, as lion mothers often do. But as she got closer, they realized it wasn’t a cub. In fact, it was something so odd and peculiar that it has animal behaviorists baffled to this day.

The young mother lion was carrying a live baby antelope! She’d carry it and then stop to put it down and lick it, then pick it up and carry it some more.

Graeme got out his camera and began taking photographs and videos of this strange scenario. A deadly predator licking an antelope and carrying it around like one of her own cubs is not something you see every day!

The lion eventually carried the youngster away and out of sight.

What at first appeared to be an uneventful day for the Mitchleys ended up being a trip to the park that they will not soon forget.

“We visit the Kruger often, but this was a rare sighting for both of us,” Graeme said. “That’s why the Kruger National Park is the best place on Earth, you never know what lies in wait around the following bend.”

While we will never know what became of that baby antelope, but we can marvel at the uniqueness of each individual creature and speculate how we hoped this ended.

Were you as amazed by this incredible animal encounter as we were? So share this!