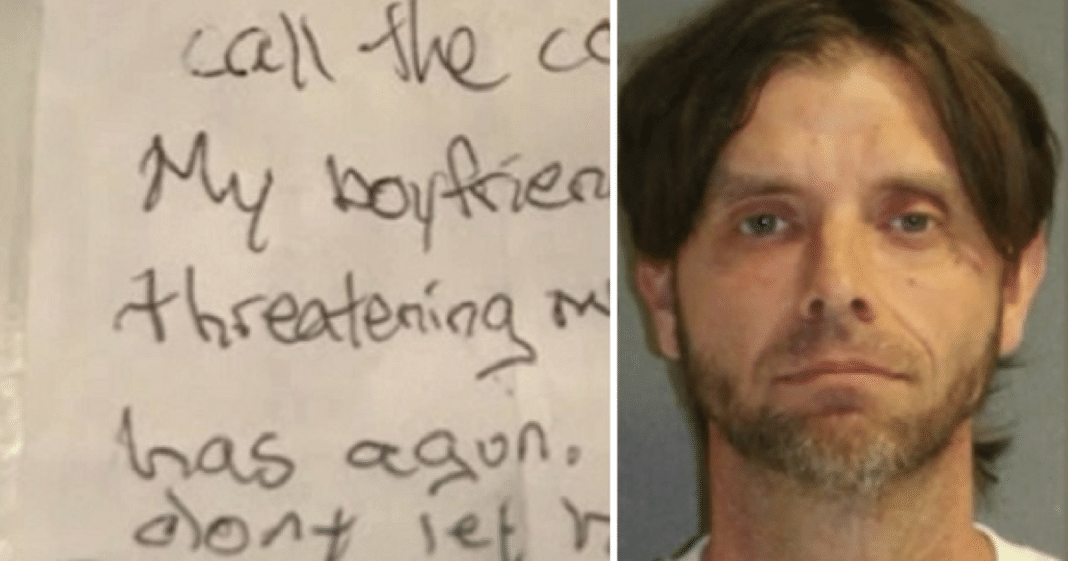 In Florida, a woman who was allegedly held hostage and abused by a man was rescued when she wrote a frantic note to veterinary staff. The man is now behind bars without bond and facing a long laundry list of charges.

“Call the cops,” she wrote in shaky handwriting. “My boyfriend is threatening me. He has a gun. Please don’t let him know.”

This is the contents of the frightened note from an unidentified woman who went to take her dog to the vet. Her boyfriend was allegedly holding her against her will. When authorities arrived at DeLand Animal Hospital, they found a 9mm loaded handgun in the waistband of Jeremy Floyd. Floyd was immediately arrested on multiple charges related to the alleged abuse and imprisonment of his girlfriend.

The 28-year-old woman, according to the Volusia County Sheriff’s Office, says that Floyd supposedly beat and threatened her after they argued. Floyd, 39, then apparently wouldn’t let her leave their home for two days.

Her ordeal began when Floyd accused her of flirting with other men. He ordered her to go into the bedroom; he was going to call several men over to have sex with her, reads the criminal complaint that lays out all the allegations against the felon.

The woman, who was not named, pretended to comply; she went into the bedroom and jumped out of a window. Floyd caught up to her before she could escape. He dragged her back inside the residence by her hair. According to the woman, he struck her with his open hand several times in the face and head. He threatened to kill her after he retrieved her handgun.

The two wrestled for possession of the gun; two or three shots were discharged landing in the floor. At the close of the argument, Floyd had the weapon. She then claimed that she slept for 22 hours straight and believed she suffered from head trauma.

When she woke up, Floyd apologized for his actions. He said that God was punishing him, she told the police. She finally convinced Floyd to let her take her dog to the vet. He refused to let her go there alone.

On the way to the animal hospital, he pointed the loaded gun at her all the while threatening to kill her and her entire family. While she and Floyd waited for their dog to receive care, the woman told cops she went to the bathroom and wrote her note, which she handed to a member of staff. The staff member quietly summoned law enforcement. Floyd was detained, and the handgun was located.

Thank God for the courage of this woman, the quick action of staff at DeLand Animal Hospital and the work of our deputies and DeLand PD! https://t.co/Cc6gbDZCKl

Deputies said when they met with the woman, they observed her left eye was bruised. She had lacerations on her hands as a result of her struggle with Floyd for the gun; she had bruises on her arms and legs from her attempted escape from the window. She was later treated and released at a local hospital suffering a minor concussion.

Floyd’s story differs from his victims. He claims they were drinking “while mixing it  with suboxone as well as other unknown white pills.” He agreed about their argument but says he was joking about threatening to have all these men come over to have sex with her. The felon attributed her injuries to her jump from the window.

He wouldn’t let her leave home because he didn’t want her to meet up with any strangers. As for why he got the gun and tried keeping it from her? According to Floyd as written in the affidavit, “ he felt she was going to commit suicide.

Posted by Ms. Foundation for Women on Thursday, October 19, 2017

The Daytona Beach News-Journal wrote that Floyd has a criminal record dating back to 1998; he’s charged with domestic violence: aggravated assault with a firearm, false imprisonment, possession of a firearm by a convicted felon and simple battery.

As of Monday, it’s unclear if he’s entering a plea or if he’s retained an attorney.