Terminally Ill Dad Isn’t Expected To Make It To Son’s Graduation, But Then Teen Grants His Dying Wish 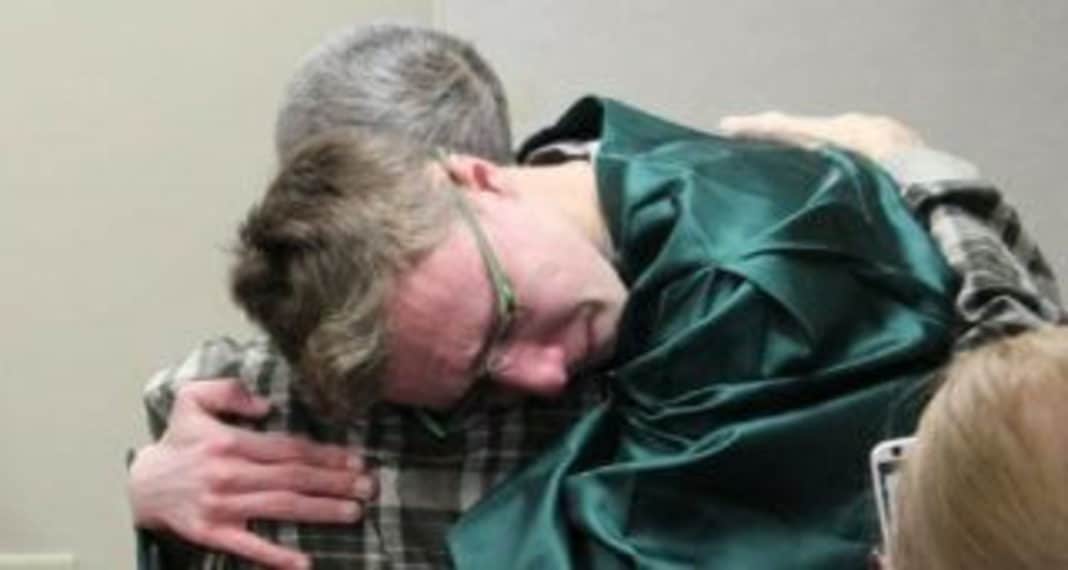 High school graduation is a time of many emotions. Pride, excitement, fear; students are ending one chapter of their lives and beginning another. They are on the precipitous of adulthood, a time where they must make large life decisions.

Walking across the stage before their peers, teachers and families is a proud moment for the seniors. But for Oak Harbor High School student, Darien Borowski, his graduation day isn’t all about him. His father, Terry, wasn’t expected to make it to his son’s graduation. He was terminally ill.

Terry had been staying at Stein Hospice in Sandusky, Ohio for two weeks. The father confessed his fears he might not survive to see his son accept his diploma. “That was the first thing that he said when he started getting a little weaker, ‘I don’t think I’m going to make it for graduation,’” recalled Terry’s wife, Michelle.

Jennifer DeWitt is the social worker responsible for Terry’s case. The ill man told her that it was his last wish to see his son graduate. She had an idea and acted on it. But she would need the assistance from Oak Harbor High to make it happen for the family and especially for Terry.

Principal Cheryl Schell, school board president Jeff Dornbusch and district superintendent Guy  Parmigian took DeWitt’s idea step further. With the help of school staff and students, they created a commencement ceremony for Darian. All involved worked to make the event as authentic as possible.

“We’ll do anything for our kids and their families,” Schell stated. “This was a no-brainer. I  couldn’t think of anything more important than to be here today.”

This is the second mock ceremony held at the hospice center in a decade. School administration fully cooperates with the center: “They would absolutely drop everything for something this important,” Dornbusch said of colleagues  Schell and Parmigian. “This is just important as the May graduation date.”

DeWitt echoed this sentiment. The hospice center puts patients first and strives to make all their dreams and last wishes come true. Terry loved seeing Darian in his green cap and gown. The ceremony meant the world to him, even if his son still has to finish up a few classes before receiving his diploma.

“I’m so proud of you,” Terry told his son, along with joking that he should throw his cap in the air.

“Just seeing his father’s face — it made us very happy we’re here today,” Schell added. “As parents, we just want to know our kids are going to be OK. That they have a future and can take care of themselves. We have no doubt about that with Darien.”

And indeed, Darian has plans for the next step in his life. He will either pursue a degree in welding or information technology.

Way to go, Darian! His father wants him to be successful. Seeing his son complete that stage of his life must bring peace to this dear father’s heart.