Teen Raised By Single Mom Almost Gave Up On Dreams, Then Concert At Church Changed His Life Forever 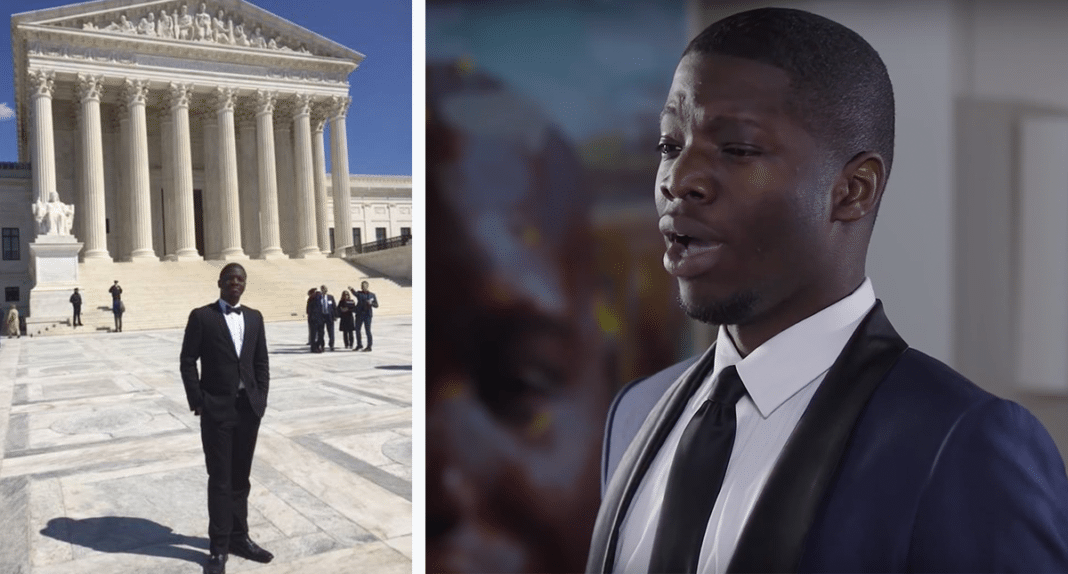 A 19-year old man from Washington D.C. went from losing almost everything to attaining his dreams in short order, thanks to his determination, the generosity of friends and a rare gift for singing opera music.

Anderson is the youngest of seven children, raised by a single mom after his dad was killed in a drive-by shooting when he was 3 years old. He would never have it easy, and he was different from most kids.

His dreams to sing opera certainly weren’t the typical goals of a teenager, but he knew it was his calling. He went to the prestigious Duke Ellington School of the Arts in high school, graduated, and decided to pursue at a major in voice performance at Virginia Commonwealth University.

Even with his impressive background, he couldn’t get a scholarship.

Like most students these days, the bills racked up quickly. Even with some financial assistance, and working on the side, he had to drop out after just one semester, unable to pay the tuition costs any longer. He was crushed.

He ended up working at a restaurant chain, Chipotle, where he prepared burritos, but they told him he was “too slow” and he lost his job.

He was at one of the lowest points in his life, but he didn’t give up.

Determined to show the world his voice, he decided to hold a benefit concert in a small church, St. Luke’s Episcopal Church in Washington D.C. There he would sing his heart out, not only in English but in Italian and German as well.

He set up a GoFundMe page, hoping somebody would help get him back on his feet to cover his debt. As it turns out, his performance that day in front of a small crowd in June last year would change his life.

Anderson’s concert caught the attention of a local columnist for The Washington Post through a friend at a youth development organization where Anderson enjoyed hiking and backpacking.

The columnist, Petula Dvorak didn’t know what to expect.

“When I got to St. Luke’s Episcopal Church, my heart sank a bit. It was not a big crowd. There were the siblings in the back rows, teachers and supporters were scattered in the pews. Ouch.

But within seconds, my untrained ear told me I had walked into something special. The entire church was filled with the deep, sonorous baritone of an older, barrel-chested man. But at the altar was a string-bean kid with a high-top fade straight out of the ’80s.”

The more she found out about Anderson, the more convinced she was that he had a rare gift. She published a column showcasing his talent and as a result, donations poured into the GoFundMe.

The donations kept streaming in, far surpassing his wildest dreams. Today, it has reached over $57,000. He had only asked for a fraction of that, at $9,000.

Even better, the artistic director at the prestigious Julliard School saw the write-up and reached out to meet Anderson. NBC News and the Today show featured stories about him.

Anderson’s talent was suddenly shining brightly in a national spotlight, and he was soaring to unbelievable heights.

Just last month, he performed before the Supreme Court and received the Horatio Alger Scholarship, recognized for “his resilience and strength in overcoming adversity.”

Yesterday, I had the amazing opportunity to sing at the Supreme Court for the Horatio Alger Association. They are an…

His dream to go to college would be realized, and his tuition costs would be taken care of, if he could just get in.

He went to audition at Julliard, one of the top music institutions in the country. After his audition, his heart sunk reading the callback list.

“The closer I walked up to it, the more and more my heart began to sink into my chest,” he wrote. “Searching the list, I felt this shaking sensation because I couldn’t find my name, but once going over it again, there it was, like magic!!!”

His dreams have suddenly become a reality. At just 19, and after reaching such a low point, everything has turned around. He wouldn’t give up, and one concert in a little church changed his life forever.