Teen Writhes In Pain After Injury From Flood, Then Stranger Paddles Up In Canoe 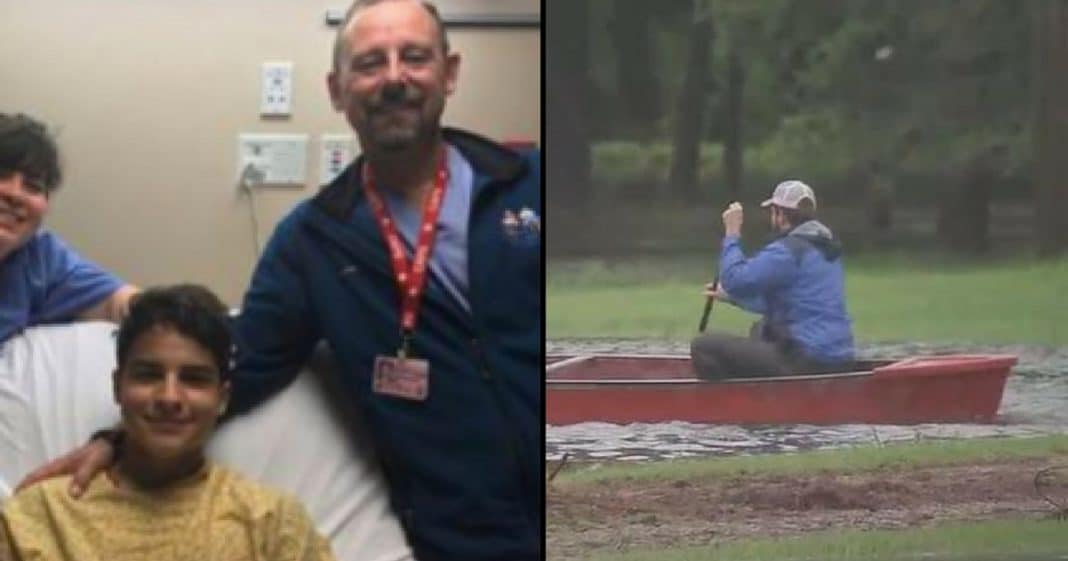 The creed “Neither snow nor rain nor heat nor gloom of night stays these couriers from the swift completion of their appointed rounds” has traditionally been applied to mailmen, but one doctor in Texas just proved that he won’t let anything get in the way of his work either, not even the floods of Hurricane Harvey.

Dr. Stephen Kimmel, a general pediatric surgeon at Clear Lake Regional Medical Center in Webster, Texas, was trying to deal with the floodwaters invading his own home when he got word about Jacob Terrazas, a teen facing permanent damage if surgery wasn’t performed immediately.

Kimmel knew the patient’s life was more important than the water damage to his home. Without wasting a second, he rushed out of his house to head to the hospital.

But that’s where things got tricky. Kimmel had planned to drive all the way to the hospital, but he soon had to turn back, unable to traverse the flooded roads.

Knowing he needed another solution, the hospital reached out to the local volunteer fire department and asked if they could help Kimmel. They quickly came up with a less (or more, depending on how you look at it) traditional method of getting the doctor to the hospital.

“[W]e ran through the flooded streets and it was pretty windy and rainy,” Kimmel recalled. “We went by canoe and then by (a firefighter’s) pickup truck and by canoe again.”

The harrowing journey might have kept others from completing it, but Kimmel put his faith in the firefighters.

“I felt that these guys knew what they were doing, so I didn’t worry about myself at all the whole time,” he said.

To complete the last mile to the hospital, Kimmel had to wade through waist-high water. He said the whole trip usually takes him 10-15 minutes total, but on this day it took him about an hour. Still, he doesn’t regret making it for a second.

“Somebody had to take care of this young man, and so I thought, well if I can do it, I certainly should,” he said. “He was on the way to our institution and I’m glad I was able to make it.”

Sixteen-year-old Terrazas had his own harrowing journey to the hospital. His family had been riding in the back of a paramedic’s truck but had to stop because of flooding.

“We had to get out and I was kind of lost, but tired,” he said. “One of the paramedics carried me to the side of the highway and after that we waited for a little bit. It was raining, my mom, my sisters they were just standing there wet. I was getting wet, cold. We were all cold. And we waited for a truck to get here and we got in the truck and left the paramedics, and after that we went to the fire department, I think, and we waited for a big truck to get there and once the truck got there, we all went in there.”

In addition to the cold and the rain, Terrazas was in excruciating pain.

“Jacob was in such pain and was shaking and hardly able to talk when we got here,” his mother, Yesenia Terrazas, recalled, “but everyone [at the hospital] is so helpful.”

When Terrazas first saw Kimmel at the hospital, he didn’t realize he was the doctor there to treat him because Kimmel wasn’t in typical medical attire.

“It was kind of weird because I got there and I didn’t know who was the doctor because I thought he was just like some, I don’t know, just some dude,” he said. “That’s what my mom thought, too. And once he told me I was like, ‘Oh, okay.'”

Thankfully, Kimmel was able to make it to the hospital in time to perform surgery for Terrazas’ testicular torsion. The teen is now doing “much better” and is incredibly grateful to the doctor who risked his own life to treat him.

For Kimmel, the difficult journey to get to the hospital was well worth it.

“Sometimes you have to do whatever it takes,” he said. “This young man’s life would have been changed for the worse forever if we hadn’t been able to perform surgery when we did. In the end, it all turned out very well.”

Thankfully, everything turned out all right for both Kimmel and Terrazas. The doctor said the Coast Guard was able to get his family out of their home and to safety. While there is some damage to their house, Kimmel says that is the last thing he is worried about.

“It’s certainly not the most important thing,” he said. “I was just happy to see [my family].”

Hero doctor canoes through flood to perform emergency surgery: “I thought if I can do it I certainly should” https://t.co/jmZgLFANFI

Do you agree that Dr. Kimmel is a hero? So share this!