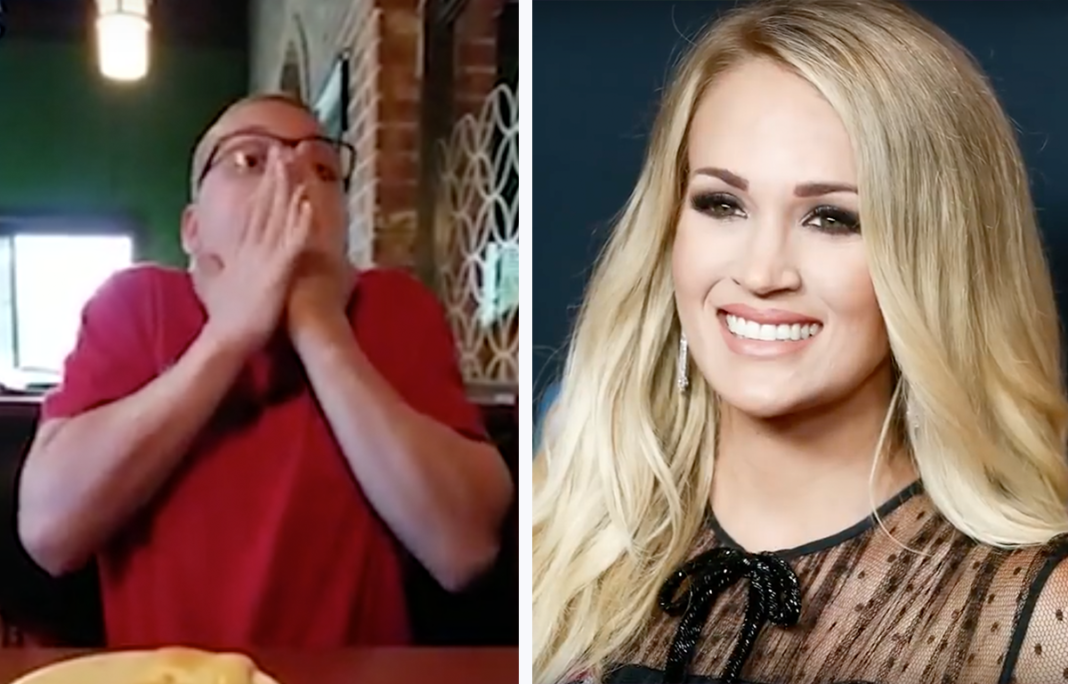 A teenage Carrie Underwood super-fan had a priceless expression when his mom tells him she just won tickets to see the performer in two weeks at the Grand Ole Opry.

His reaction is so full of joy that it went viral and led to seeing his dream come true just days later.

Nashville mom Elizabeth Cowles caught it all on video when she shared the big news with her son, who has cerebral palsy. She knew it would delight him because he is one of Underwood’s biggest fans, but she built up to the reveal slowly.

An unsuspecting Cameron had no idea that she was about to literally rock his world. While at a restaurant, she started filming and said:

“Cameron, you’re not going to believe what happened to me today.”

“I was sitting at work, and I was listening to the radio…”

Then Elizabeth gets to the big news. She heard a woman on the radio tell her she just had to “take a chance on this” and call in. She didn’t have any idea why she was calling, but she felt compelled to do so anyway. She dialed the number and somebody picked up and asked her about her family.

“She said are any of you Carrie Underwood fans? I said ‘Oh lord, yes. My son is a superfan.”’

“I said, ‘He knows everything in and out about Carrie Underwood. You would be amazed.’ And you know what she told me?”

Then he gets the big news.

“You let your son know that you’re going to get to take him to see Carrie Underwood at the Opry August 10th.”

That’s when Cameron positively lights up the room in ecstatic joy. He is so overcome with excitement that he puts his hands over his mouth.

If that wasn’t awesome enough, after the video went viral on social media, the Grand Ole Opry invited Cameron backstage to meet his American Idol in person. He even got to give her a big hug and chat with the star in her dressing room.

@MusicCityTyler Here are some pics from last night when Cameron's dreams came true!! Thank you for the love and support!!!!❤ pic.twitter.com/zr7FshzFrP

The elated mom shared that her son had always dreamed of the moment.

“Meeting Carrie has been his dream since he was 6 years old!!!” she said on Twitter.

Shout out to @OnAirAsAmy @98WSIX @carrieunderwood @opry for making my sons dreams come true!!! Meeting Carrie has been his dream since he was 6 years old!!!#CameronMEETSCarrie #OVERJOYED #BlessedMomma

The singer even gave him a shout-out to Cameron about four minutes into the performance.

We want to thank Elizabeth Cowles for letting us all share in this wonderful moment of joy too.

There is more good news about Underwood. She announced her second pregnancy and her Cry Pretty Tour 360 on Twitter on August 8.

“Mike and Isaiah and I are absolutely over the moon and excited to be adding another little fish to our pond!” said a glowing Underwood.