Teen Promises To Take Girl With Down Syndrome To Prom. What He Just Did Has Mom In Tears 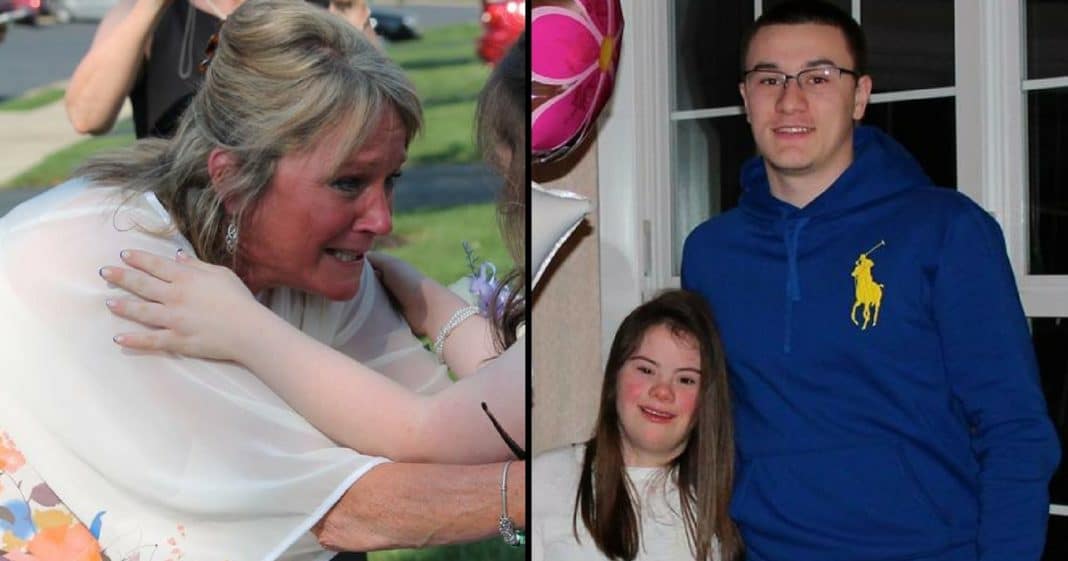 High school can be a difficult time for many kids. Popularity and “fitting in” often feel like the most important things in the world, and teens don’t want to do anything that could get them bullied or made fun of.

But Ben Moser, a quarterback from Susquehanna Township High School in Harrisburg, Pennsylvania, isn’t worried about his image. He knows that it’s not the outward appearance, but what’s on the inside that truly counts.

When Ben was in fourth grade, he made friends with a girl in his class named Mary, who has Down syndrome. He took her under his wing and made sure she was included.

“We were always hanging out on the playground together playing around. I was looking out for her, making sure she playing with everybody,” Ben recalled.

He promised Mary that when they were older he would take her to prom.

When Ben told his mom, Lisa Moser, his plan, she was incredibly touched by her son’s kind heart.

“[T]hat would be one of the proudest things you could ever do,” she told him.

When the pair was getting ready to go into sixth grade, though, Mary moved to a new school district and they lost touch.

“We were distant, we went to two different schools, I didn’t have much contact with her,” Ben said.

Several years went by, but then one fateful night Ben and Mary were reunited.

Ben was the quarterback for Susquehanna Township’s football team and Mary was working as the ball girl for Central Dauphin. When the two schools played each other, Ben and Mary were reunited on the football field and Ben remembered the promise he had made to Mary when they were young. He decided he was going to keep that promise.

“We got balloons and I wrote ‘prom’ on it,” Ben said. “I presented her with the balloons and asked her to go to prom with me.”

“I was surprised,” Mary said, smiling.

When the big night came, lots of friends and family turned out to see the couple off, including their fourth-grade teacher, Tracey Spogli, who remembers what special students they both were.

“Ben would always keep an eye out for Mary, making sure she was smiling and happy,” Tracey recalled. “I referred to Mary as ‘Little Mary Sunshine’ because she was the sunshine in our classroom. The entire experience of that fourth-grade year was a very positive learning experience for the entire classroom and I am so proud to have been part of it!”

Lisa said she always taught her children to “put others first, love from their heart, and stand up for what they believe in,” and she is so proud to watch Ben live that out.

“My heart just overflows with love watching [Ben and Mary] tell the story of their friendship,” she said.

She added that Ben was never concerned about how it would look to take someone with Down syndrome to the prom or about what others would think.

“For him, it was no big deal,” she said. “He was just doing what was natural and comfortable for him. It’s not just a football quarterback or a girl with Down syndrome, but a friendship that withstood the test of time.”

But while it may not have been a big deal to Ben, asking Mary to the prom meant the world to her and her family.

“A lot of grade-school aged kids may have stayed away from my sister Mary or thought she was weird because she has Downs Syndrome. But not Ben,” Mary’s brother, Tom Lapokwicz, said.

He added that Ben “put a smile on Mary’s face” and restored his own faith in humanity.

For Ben, all the attention surrounding him and Mary has been unexpected and even unwarranted.

“There’s nothing wrong with going to the prom with somebody that’s not like everybody else,” Ben told Fox43. “You should just be who you are and do what’s right and keep your word, just be you.”

Were you touched by what Ben did for Mary? So share this!