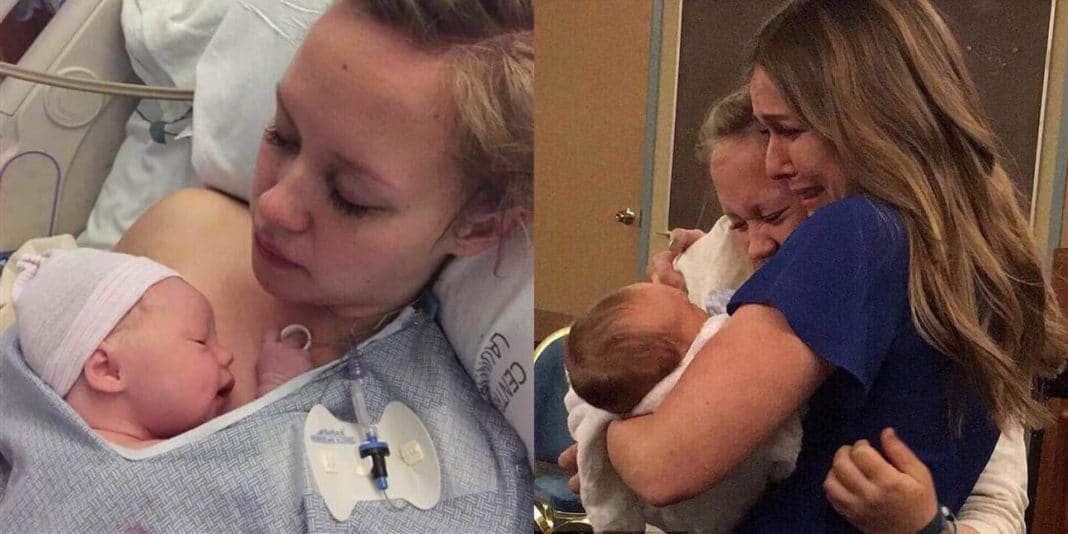 Parents who make the agonizing decision to give up their babies for adoption are courageous beyond words. To willingly and legally give away the right to parent your biological child, to possibly never see them again must hurt your heart and pain your soul in ways few can understand. But what may help you deal with this choice is knowing your baby will have a great life with loving parents.

For 18-year-old Hannah Mongie, adoption was her only option. She met her sons’ father, Kaden, while he was on leave as a missionary with the Latter-Day Saints church. She and Kaden were happy and thought they would be together to raise their child. Though Kaden wasn’t able to be with Hannah for the numerous doctor’s appointments, she was able to text him the sound of their child’s heartbeat. Kaden was reportedly so excited, he rushed around, unable to contain his joy.

What Hannah didn’t anticipate was losing the love of her life. Two days after she sent Kaden the message with their baby’s heartbeat, he died in his sleep.

It was the combined loss of losing Kaden and the thought of being a single parent that made up her mind for her. She was going to give up their child. Hannah wrestled with her decision. It wasn’t easy. She loved the son she and Kaden created together.

Hannah acted with bravery and strength when she recorded a video for their son, Taggert, Tagg for short. After his birth, Taggert would only get three short days with Hannah before he would be taken away. Hannah wanted to use this time to her advantage.

In the video, she reflected on his first birthday, “If I could go back and live these three days of agony all over again, I would do it in a heartbeat. Happiest first birthday to the love of my love, my sweet Taggart Kaden Marsh. You will always be my first true love.”

In her last hour with Taggert, Hannah recorded this video. She talked about the great love she’d had with his father. She mentioned her enormous grief at his passing and how giving up their precious baby was an act of love.

“Gosh, you’re so cute, you’re making this hard,” she says early on in the video and all of us watching can feel that difficulty.

“I made this decision purely out of love because I knew I couldn’t give you what I knew you needed which is a mommy and a daddy,” she said. “And I hope your daddy is watching over us right now. I bet he’s with me right now. Cause this is the hardest part, and he wouldn’t leave me alone during this.”

Hannah’s affection for her Taggert didn’t end once she gave him up. Brad and Emily Marsh adopted Tagg. Hannah lives ten minutes from her son and his new family. She’s fortunate to see him at least once a month. She sometimes sees him more than that. She even babysat her son. Little Taggert comes to her family’s parties and Hannah to his.

Rather than giving Tagg away, Hannah explained: “I just adopted his entire family into mine. Including his extended family. We just grew, and everyone loves each other as if we’ve always been family. His mom Emily is still one of my best friends in the whole world.

She honestly is everything I want to be as a person and a mother. I am so grateful that Tagg led me to her and their family. They are a blessing alone. And with Tagg, they are everything I need.”

I wouldn’t be surprised if some folks reading this are adopted, considering adoption or have been put up for adoption. I hope your story is filled with as much love as Tagg’s. We can learn from Hannah about the real power of love. It’s unselfish and compassionate. She was so strong doing what she did all for her baby boy who she loves with all her heart.