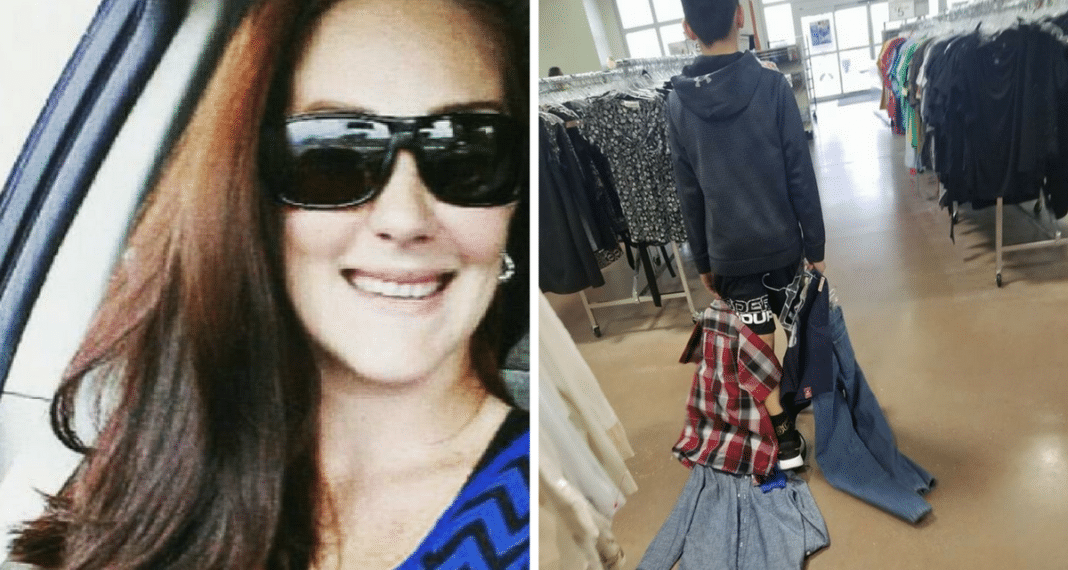 We live in a world where excess is the norm. Instead of one television in a household, some have two or more; everyone has at least one mobile device. And computers? Ditto.

It’s not hard to see a child become entitled, expecting the best just because. This is exactly what happened with Cierra Forney’s 13-year-old son. She says he’s been acting out, which is typical for teenagers his age.

She’s become fed up and frustrated with his snarky remarks and comments about his classmates who buy their clothes from stores like Walmart and Goodwill. Cierra doesn’t want her children to have this sense of entitlement. Many children come from good, loving homes; their families can’t afford the expensive stuff.

Cierra devised an ingenious and powerful punishment for her son that has taken the internet by storm. Her Facebook post has been shared over 200,000 times. She didn’t have to go far to teach her son an important life lesson. They headed down the road to their local Goodwill store.

“So lately, my 13-year-old son had been acting a little… entitled. Acting like he’s too good to shop at Wal-Mart or making snarky comments about kids at school who shop at the Goodwill and quite a few other things. I don’t tolerate that.”

Here’s where Cierra’s lesson comes into play. “Today, he took his own 20.00 to the Goodwill to buy clothes to wear the entire week to school. Whatever he found is what he would have to wear.”

I can understand if Cierra’s son was embarrassed and upset by his mother’s punishment. She’s obviously a confident woman sure of her decision; what she’s doing will have a lasting effect on him that will hopefully make him realize how unkind and cruel his behavior was.

“He isn’t happy and shed a few tears, but I firmly believe in 15 years he will look back and laugh at the day his Mom made him shop at Goodwill.”

So lately, my 13 year old son had been acting a little… entitled. Acting like he's too good to shop at Wal-Mart or…

Cierra ended her Facebook post with a powerful statement on parenting and discrimination. “I want to teach my kids that money isn’t everything, and if you have to degrade other people because of where they shop, then you too will shop there. Side note, I love the Goodwill!!”

So do I, Cierra! I love seeing a parent take their children in hand to teach them the importance of being thankful for what you have. We must respect everyone regardless of whether their threads are high-end or hand-me-downs. Our clothes don’t make us who we are. It’s what’s underneath that counts.