Teen Kicked Out Of Graduation For Only Pants He Can Afford. What Stranger Does Has Him In Tears 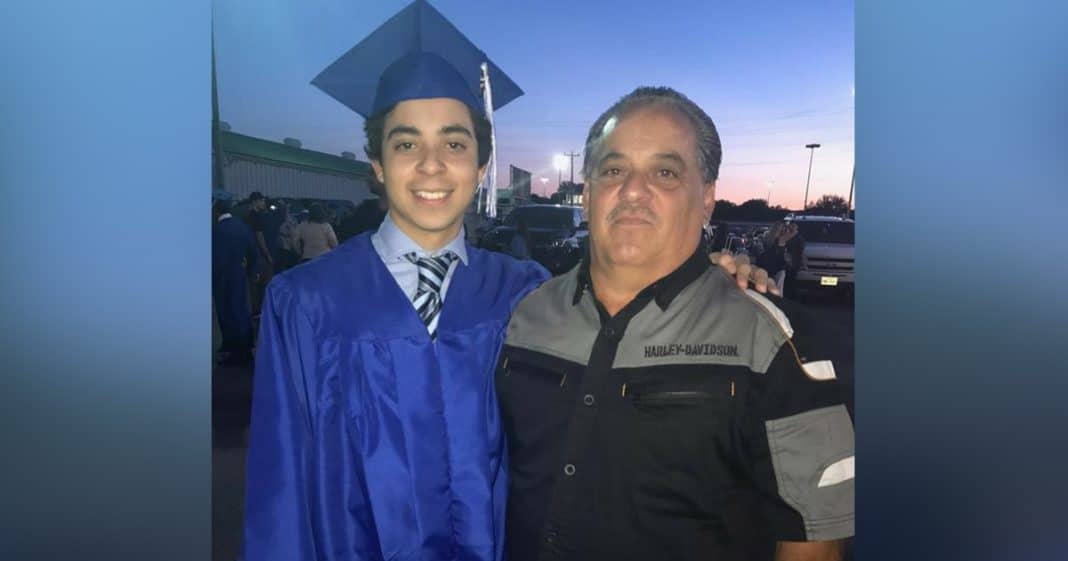 After 12 years of hard work, Leroy Solis Jr. was about to walk across the stage at the Freeman Coliseum in San Antonio, Texas, to receive his diploma. He, along with the rest of the graduating class from MacArthur High School, couldn’t wait to cross that stage and walk forward into their bright futures.

But as Leroy got ready to line up with the other graduates, he was told he wouldn’t be allowed to participate in the ceremony.

It wasn’t because of Leroy’s grades or any trouble he had gotten into. Instead, he was told he wouldn’t be walking across the stage because he wasn’t wearing the right clothes.

Indeed, the school’s principal had sent a letter home telling the young men graduating that they would be required to wear dress slacks, a dress shirt, and a tie to the graduation ceremony.

“Failure to comply can result in not being allowed to participate in the ceremony or removal from the ceremony,” the letter read. “This is not something that I ever want to see happen, but these expectations will be enforced.”

The problem was, Leroy didn’t own slacks or a tie, and he didn’t want to ask his father – a single dad on a fixed income – for money to buy them because he knew it would put financial strain on the family.

He figured his gown would cover up most of the jeans and no one would be able to tell if he was wearing a tie or not. If all else failed, Leroy hoped the school’s administration would show some compassion.

But that was not to be. With just three minutes to go before the graduates were supposed to line up and walk into the stadium, the principal spotted Leroy and told him he would not be participating in the ceremony.

Embarrassed, defeated, and heartbroken, Leroy left the stadium and started walking back toward his car. When he got there, though, Leroy saw something that would change everything.

As he was about to get in his car, Leroy spotted another young man who was about his size and wearing dress slacks. Figuring he had nothing else to lose, Leroy quickly explained his situation to the man and asked if it would be possible to trade pants.

Without hesitation, the young man, who was with his father, told Leroy to get in the truck and they made the swap.

“Go cross the stage!” the men told Leroy as he quickly headed back to the stadium to join his classmates.

As he approached, he even found someone selling ties for $10 just outside the Coliseum. His outfit was now complete and he would be crossing that stage!

After the ceremony, Leroy couldn’t find the young man again to switch the pants back, but his sister, Rosemary De Los Santos, posted a picture of the proud graduate with his dad in the hopes that they will be able to find the anonymous stranger who so graciously and selflessly helped Leroy that day.

“To the guy who loan (sic) my brother his slacks yesterday to graduate THANK YOU VERY MUCH!!” she wrote, adding, “Please share this post. I want I find out who these very kind and generous people are.”

Rosemary said this incredible act of kindness “will change my life,” and she plans to pay it forward. She said she’s considering starting a clothing drive where people can donate dress clothes for graduates like Leroy who can’t afford their own.

Maybe those two men were angels in disguise – we may never know. But one thing is for sure – their kindness is something Leroy and his family will never forget!

Were you touched by what this young man did for Leroy to help him graduate? So share this!