Teen Cashier Pays For Cop’s Cookie, Family Standing In Line Throws Fit And Gets Him Suspended 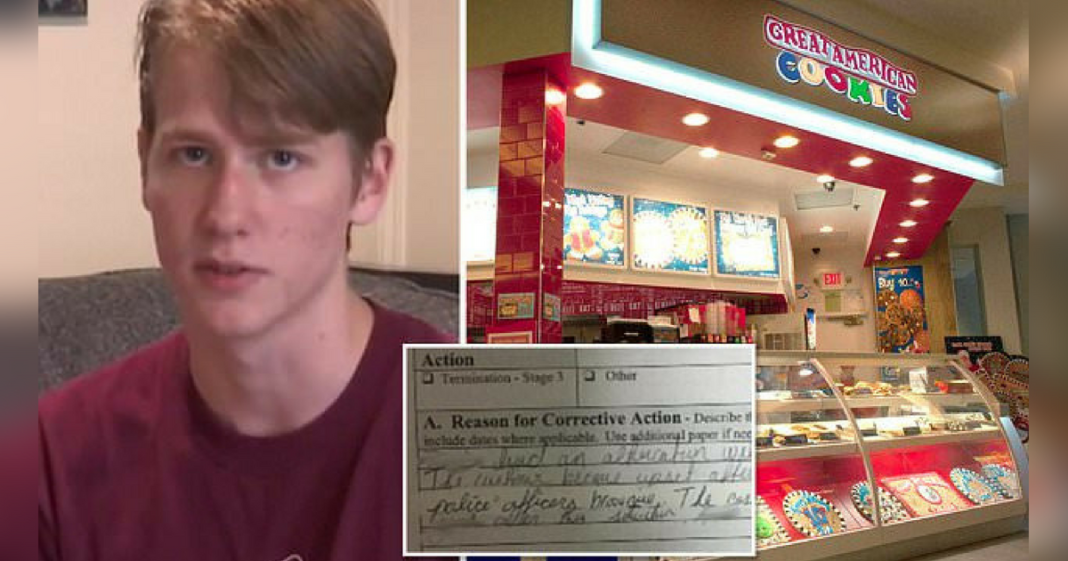 It’s unthinkable an act of goodwill could come back to haunt you. You performed a good deed to help someone else. For one teen named Zack Randolph, he suffered criticism, the threat of physical violence, and suspension all because he chose to do something nice for a fellow human being who happened to be a member of law enforcement.

Zack’s mom Tami, wrote about this incident on Facebook.

“My Son works at Katy Mills Mall [for Great American Cookie Company], and on Sunday evening an on-duty Police Officer walked up to the counter and placed his order. My son offered to pay for his cookie with his own money. The officer was grateful said thank you and walked away…..

”The next family walked up and said: “are you going to buy mine too?” My son replied with “I’m sorry I bought his because he is wearing a badge”…… then this customer started verbally attacking him, calling my son a racist, & threatened to beat him up. His wife threatened to go back there and slap him. The middle-aged man sat down his little daughter and tried to come behind the counter to attack him. Thankfully his coworker defused the situation. The man then said, “I will get you fired.”

“As soon as this man started the attack, my son, he stepped back and walked away… he said very little to this man.

“On Monday he received a text stating that he was to bring all of his “stuff” the next day for a meeting with his manager and upper manager.

“Tuesday he walks in with all his stuff. He was told the upper managers want him fired. Thankfully his manager refused and said you are an excellent worker and everyone agreed that you did nothing wrong (The day before this situation he was offered a $2 an hour raise and management) He then started his normal scheduled shift. He worked 2-3 hours when he was called into the back room where she had written him up. It says “he bought a cookie for a police officer and a customer wanted to physically fight him” it does state “if this happens again he will be terminated.” Then she stated after today’s shift you will be on a 1-week suspension……. REALLY (he did finish off his shift).

“Since when does buying a police officer a cookie give anyone else a reason to attack someone. And when did a Corporation want to FIRE someone for being KIND, taking what a customer said or did, regardless of how hateful they are.

“Great American Cookie Company you FAILED on this one……

“Thankfully my son said he would do it again in a heartbeat.”

Good for you, zack, for doing something nice for this police officer. How pathetic his employer reacted with such idiocy. And what a shame the customer behind the cop responded so negatively, and where his young daughter as a witness to boot.

“UPDATE: For the first time since my post on July 5, the Company reached out to Zack on Wed July 12 to offer a verbal apology, offered to pay for the hours he was scheduled during the suspension, and hoped he would return to work. Zack returned the call and left a message asking if he could receive a written apology (for reference if needed for future employment). He has not heard back from them or received a written statement at this time.”

Since this update, the company has admitted it acted in the wrong. Zack’s suspension was revoked and the company issued an apology.