Teen Has Audience In Tears Before She Even Begins, But When She Starts To Sing…Breathtaking 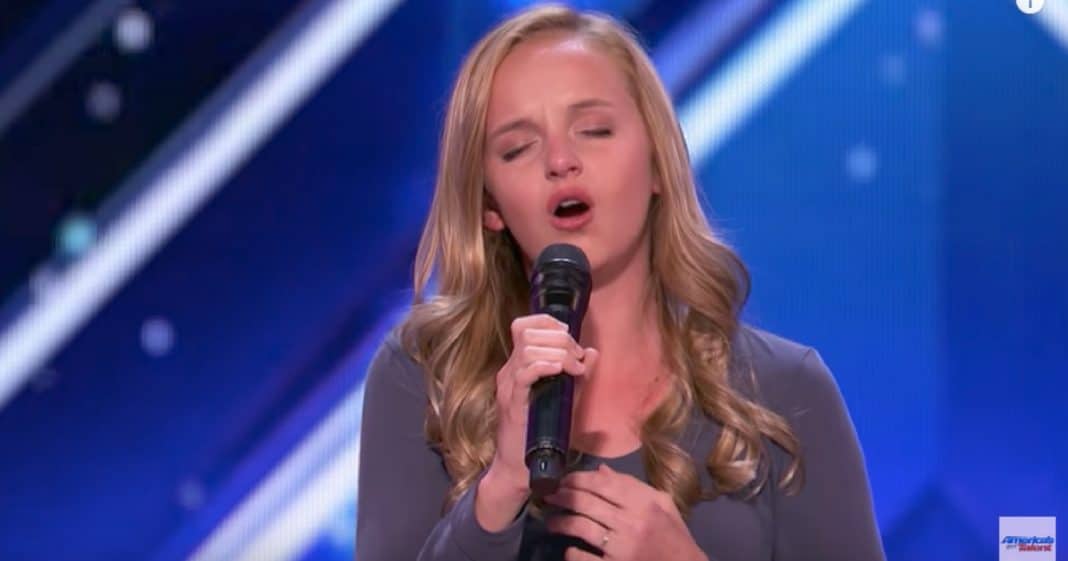 America’s Got Talent has seen a large number of incredible performances this season, from a young ventriloquist to a deaf girl who can sing. All of these artists have been amazing, but every so often you come across a performance that takes your breath away, and that is exactly what happened when 13-year-old Evie Clair took the stage.

Judge Simon Cowell made small talk with the young singer and asked her to tell him a little bit about herself. She told him she was from a small town in Arizona where there wasn’t much except for a few prisons. Her dad works at one of the prisons to support their family.

It all seemed fairly routine, but when Simon asked Evie to tell him why she wanted to be on America’s Got Talent, the teen immediately broke down in tears.

As she struggled to compose herself, Evie told the audience that her dad had been diagnosed with stage 4 colon cancer about a year before and doctors had only given him a five percent chance of survival.

“Tonight I’m here to sing for him,” Evie said, prompting tears from the audience – and her parents backstage – before she had even begun to sing.

Evie explained that the song she chose to sing that night – “Arms” by Christina Perri – is the one she sings to her dad to give him comfort and strength to keep fighting when things get tough.

“When my dad is having rough days, I sing him this song to make him feel better and give him comfort and strength to continue fighting,” she said

“Evie, you’ve been really unbelievably brave with what you’ve told us tonight,” Simon told her as he gave her some time to compose herself. “Now, this is the time I want to hear the best vocal you’ve ever, ever done.”

When Evie opened her mouth to sing, it was clear that this young girl is something special. Despite the tears and the heartache, her voice was pure and strong.

Click below to hear her incredible performance for yourself. (You might want to grab a few tissues first.)

It’s clear that what this young singer has is magic. She was even able to soften the famously tough and curmudgeonly Simon Cowell!

Evie is up against a lot of great talent this season and no one knows who will eventually come out of this show the winner, but one thing is for sure – this young woman is going to go far!

Were you as touched by Evie’s emotional and powerful performance as much as we were? So share this!