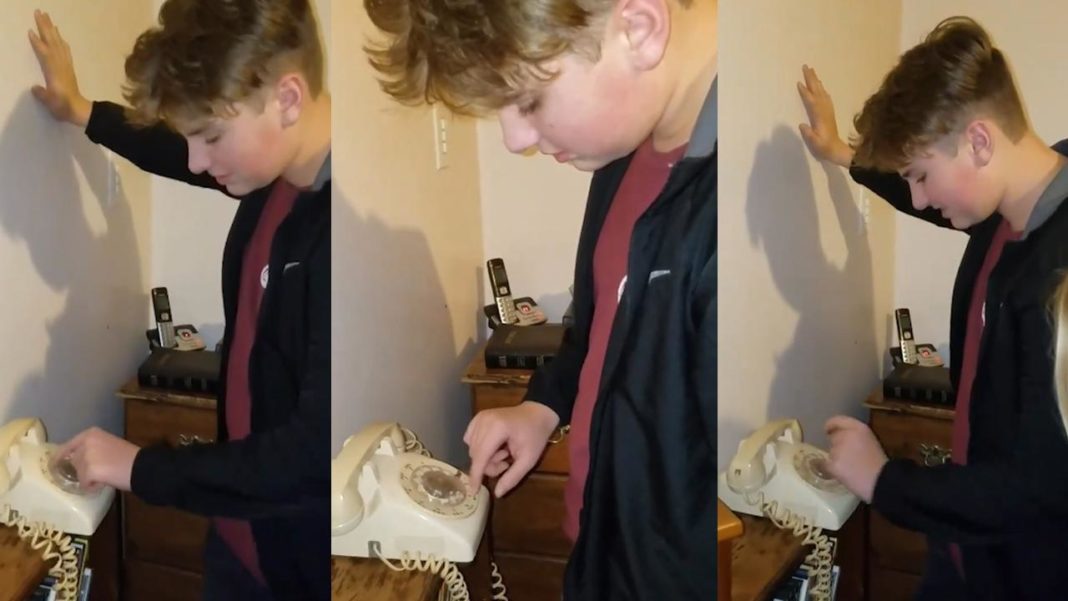 If you’re part of the younger generation, born after 1999, you’re a tech-savvy wizard. You might not be familiar with this list of items that were used before you were born: encyclopedia, card catalog, floppy disk, mixtape, pager, VHS.

No worries. I’ll wait until you’re done Googling all that.

You might want to wait until after you finish reading this post. One mother asked her teenaged son to call her using an old-fashion rotary phone. She was clever enough to capture her son’s attempts on video, and the internet is cracking up.

TAG a friend to remind them of this!

He starts by hollering, “Where’s the zero?”

Oh, my. Not a good start, is it? Well just wait. There’s more ensuing chaos to come.

Then, he gives that odd plastic thing a few random less than enthusiastic swirls. He then lifts the receiver, hoping it’s worked. Nope, sorry, kiddo.

Mom’s rallying behind him all the way. Through her hysterical laughter, she encourages him to try again after saying: “You were so close.”

The teen applies more concentration, but clearly, he has no idea how to work this weird contraption. He still isn’t giving the dial the full spin needed to lock in the digits.

Okay so when your knowledgeable tech guy trys to operate old school technology!!!! This shit was priceless????????

“I messed up,” he admits, picking up that clunky receiver and plunking it back down. Waiting a few seconds, he lifts it again only to set it back in the cradle. He’s confounded with how this phone works. He’s not getting anywhere. Finally completely exasperated, he breaks out his smartphone and turns to Google for assistance.

Meanwhile, mom’s laughing so hard it sounds like she’s about to break into sobs of mirth.

You have to admit no matter what generation you’re part of; this is hilarious. Those from an older generation might appreciate this more than those who are younger. They’ve been there, not understanding the latest apps, avatars, and newest technology can make their heads spin.

Technology might make our lives easier, but if you didn’t grow up with a smartphone, you’re going to struggle to learn how it works and what it can do. I’m sure this teen and others can now appreciate how it feels for grandparents to handle technology that’s unfamiliar to them. Maybe they’ll show some sympathy and patience next time someone asks for help.