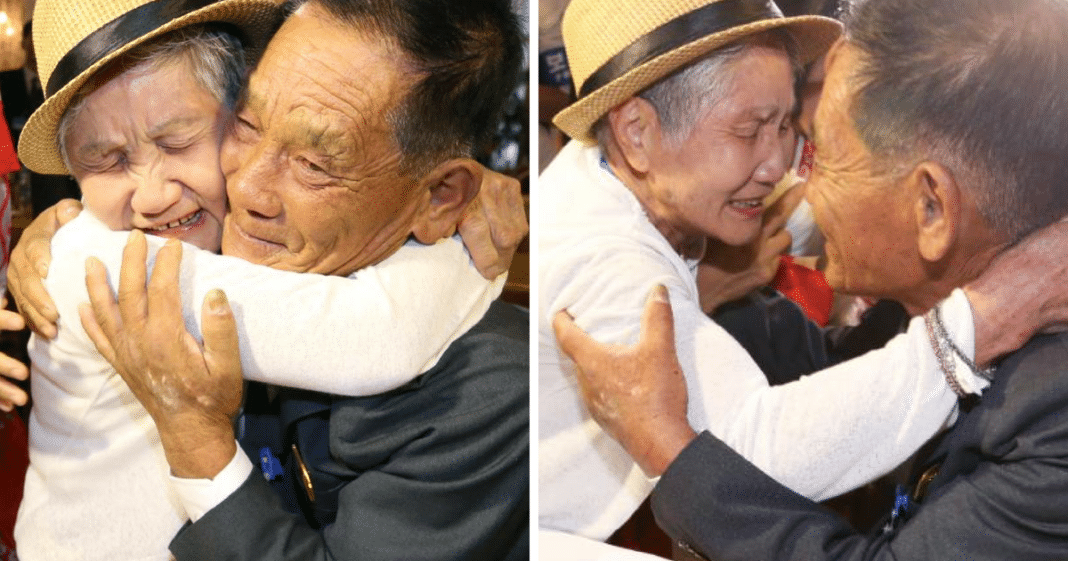 War not only devastates countries and their economies but families as well. The Korean war is no exception. Family members separated during that conflict are being reunited after almost seventy years apart.

Lee Keum-Seom, 92, finally got the chance to see her son whom she’d been parted from for 68 years. She waited for him at a holiday resort in North Korea this past Monday.

Her son, Sang Chol was 4-years-old the last time she saw him. He is now 71. The two became separated when Lee and her husband and children were trapped on either side of the Demilitarized Zone, DMZ. Her husband had her son, while she had her daughter.

Lee brought her two daughters while her son’s daughter-in-law accompanied him on the journey. Their reunion was one of 89 held at a resort near Mount Kumgang in North Korea. Many family members from South Korea were loaded on buses and driven across the DMZ. These few families were selected from over 57,000 who had applied. These meetings are as a result of the Panmunjom Declaration signed earlier this year by both North and South Korea.

After their initial greeting filled with tears and hugs, Lee’s son showed her a picture of her husband who is now deceased. “This is a photo of my father, mom,” Sang Chol said, dissolving into sobs.”

(My family) in North Korea didn’t live long, so I prayed for my son’s health,” Lee told CNN.

She admitted to feeling anxious about seeing her son after all these years. She only knew him as a child. She was unsure how to catch up after so long apart. “What shall I ask?” she said. “Oh, I should ask him what his father told him about me. His father must have told him about how we got separated and where our house used to be. I should ask him  about that.”

Lee needn’t have worried. She and her son embraced tightly, tears streaming down their faces. They clasped hands during the entire reunion.

For those lucky to be chosen to reunite with family members, they were given medical checks. Over 60% of the participants are over the age of 80. they were warned to not speak of anything that could be misconstrued or insensitive north of the DMZ.

Approximately 200 South Koreans and their family members crossed into North Korea to meet with relatives most haven't seen since they were separated during the Korean War. Here are some reunions, more than six decades later.

Many arrived in wheelchairs. Red Cross workers applauded them as they came. They walked beneath a banner that read: “We sincerely congratulate the reunions of the separated families!”

Once the reunions took place, everyone was invited to register their names and to pose for a professional photo.

Park Kyung-Seo, president of the South Korean Red Cross, told CNN that while he was overjoyed to be assisting in family reunions, the small number of those taking part was a “human tragedy.”

“I share fully with the disappointment of those who are not selected, so I am trying with North  Korean partners to try and find other solutions, huge numbers are waiting, the numbers are very much limited,” he said.

“Imagine 73 years long without knowing whether their family members are still alive or passed away — no news at all. The agony and anger, that’s an unthinkable human tragedy.”

In a statement Monday, South Korea’s President Moon urged both Koreas to work towards more reunions in future. He is a child of North Korean refugees. “Expanding and expediting the reunion has the utmost priority out of all the humanitarian projects that both Koreas must conduct. The Koreas must more boldly make an effort towards solving the divided families issue,” he said. “As a member of a divided family myself, I sympathize deeply with that sadness and pain. There really is no time.”

Ahn Seung-Chun was headed to North Korea to see family she’s never met. “I applied to see my older brother. But he passed so I’ll never see him now.”

“I’m going to see my nephew and my brother’s wife,” she added. On one hand, I’m sad that I won’t see my brother. But on the other hand, I’m happy to meet the nephew. At least I will be meeting a fruit of my father.”

Since the end of the Korean War, the Red Cross has reunited many families. Sadly, 75,000 people have died before they could be united with relatives.

Not everyone is joyous. One son protested because his father wasn’t selected. “I don’t know when he will die. He is beginning to show signs of dementia. Before he loses everything, he wants to go too,” Kim Seong-jin said. “But all he can do is to watch through  television each time and get hurt.”

This man’s reality is similar to many. “My father is all alone here in the South. Can you imagine how much he misses his family?” Kim said. “He wants to hear the news of his hometown before he dies.”

How sad and heartbreaking this must be for those who aren’t chosen to see long lost family members after so many years. It’s bittersweet for all involved. I hope there are more reunions planned soon. These folks have already spent too much time apart.