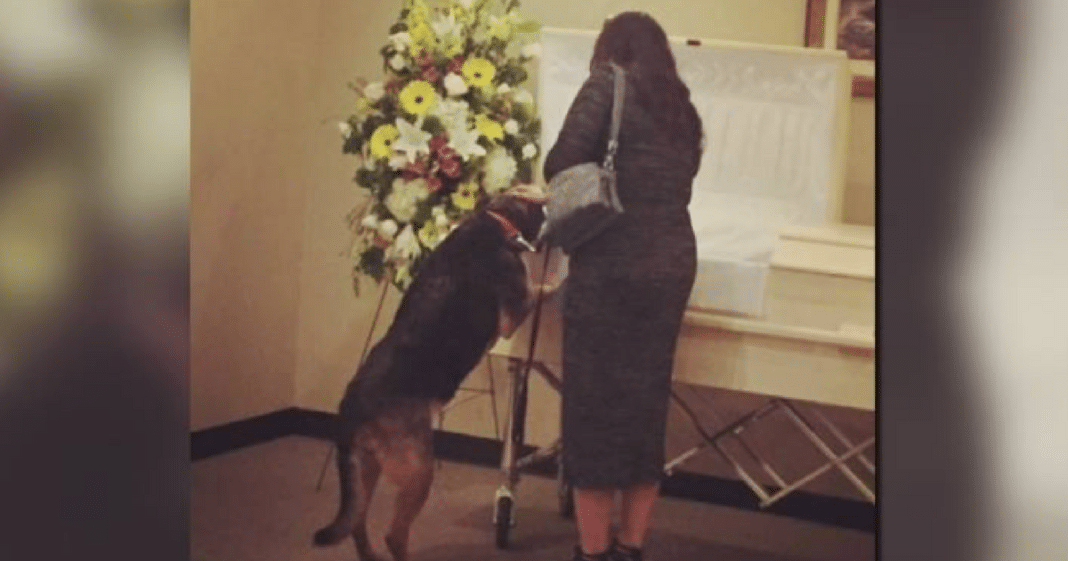 Animals experience grief just like people. Those who live with a family spend their entire lives attached, dedicated and loyal to the people who care for them. And when one dies, the animal is smart enough to realize something is wrong – someone is gone. Sadie is a 13-year-old Border Collie/Dalmatian-shepherd mix. One of her owners died, and she was left bereft until she got to say her own goodbye.

Julia Beaulie’s husband passed away of a sudden heart attack a few months ago. After his death, Sadie stopped eating. During those ten days, she lost weight and was so sad, hoping he’d return. The CEO of the funeral home took a photo of Sadie and Julia standing beside the coffin of Julia’s husband. The image is heartbreaking yet so touching as the sweet canine visibly mourns than appears to accept her loss.

?Heartbreaking photo shows dog standing at casket to say goodbye to her guardian.“She came and laid with him, pushed…

Julia explained to Global News how Sadie was adopted into their family when she was a pup; she was only eight weeks old. The loss of her husband was as much a shock for the precious pooch. As people came to remove her husband’s body, Sadie responded by nuzzling him as if to say, “wake up.”

“Once they stopped working around him, she came, and she laid with him and pushed at his hand almost as if to get him to pet her,” Beaulieu said. “She was daddy’s girl — she was his, and he was hers.”

After this, the sad girl waited at the window, watching and waiting for her dad to return home. Julia knew she needed to bring Sadie along to the funeral so she could find her own closure. It wouldn’t only benefit her physical health but her emotional wellbeing.

And that’s exactly what she did. “I let her stand up and look [in the casket], and she had almost a look of shock on her face,” she told the Canadian Broadcaster. “She stood there…and was quite puzzled by it and then she just seemed to  relax and just stood there with me.”

How darling yet tragic this photo is. Poor Sadie, but it’s lovely that Julia allowed her beloved dog to grieve in her own way before helping her deal with accepting her owner’s passing.