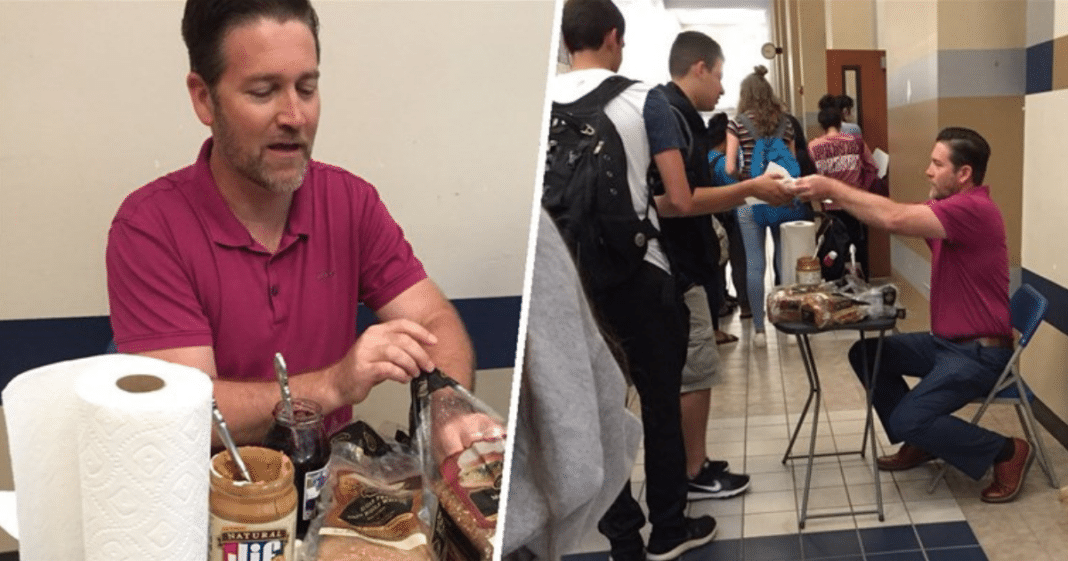 Teachers are angels on this earth. They far and above excel at making kids feel special and helping them to succeed.

A Texas high school English teacher’s love for his students went viral after one of his students put him on blast on Twitter. This student from Clear Springs High School in League City, Texas tweeted this.

shoutout to mr johnston for making pb&j for his kiddos who didn’t eat breakfast before our AP test this morning :’) pic.twitter.com/FvzC0mirPt

On the day that his 11th-grade students were taking the lengthy three-hour Advanced Placement (AP) exam, Brian Johnston set up a table outside the testing room so that he could make them a healthy snack that would see them through the test. What did he choose? A peanut butter and jelly sandwich.

“Students are usually absolutely exhausted for the rest of the day after these exams,” Johnston said. “They have to go in with something in their oven.”

Johnston himself is a health nut, he says, so he brought in natural JIF peanut butter with grape jelly, along with an assortment of whole grain bread. He says he made about 50 sandwiches in total.

Actor Ashton Kutcher shared this video on Facebook, which helped the story to go even more viral.

Johnston says he was inspired by the AP biology teacher at his school. Vanessa Seghers has made snacks for her students in the past.

The principal of Clear Springs, Gail Love, told Today that most of the students at her school have money for breakfast, but often don’t eat because school stars so early and some students wait at bus stops as early as 6:20 a.m.

“They just don’t eat before they arrive,” she said, explaining that many may opt for a vending machine snack to tide them over.

And the tragic fact is that there are kids who just don’t have money for a real breakfast or for a vending machine snack.

Hannah Hayes’ tweet has been retweeted nearly 20,000 times and liked by more than 100,000 people. She told Today this:

“A lot of times teachers go unnoticed, and even though it’s kind of a small gesture, it meant a lot and it made an impact on students,” Hayes said to Today. “It really shows that he cares about his students and wants them to do the best they can.”

It’s such a small thing, isn’t it? A peanut butter and jelly sandwich. But it can go a long way to helping these kids stay focused, and most importantly, show them what a good teacher and mentor looks like. On that day, every single one of these kids felt loved and cared for.

Teachers like Brian Johnston and Vanessa Seghers are changing the world, one child at a time. These stories need to be highlighted more often, and we’re happy to do our part to get them out there.