Teacher Spots Note Sitting On Desk. When He Opens It Up…Tears 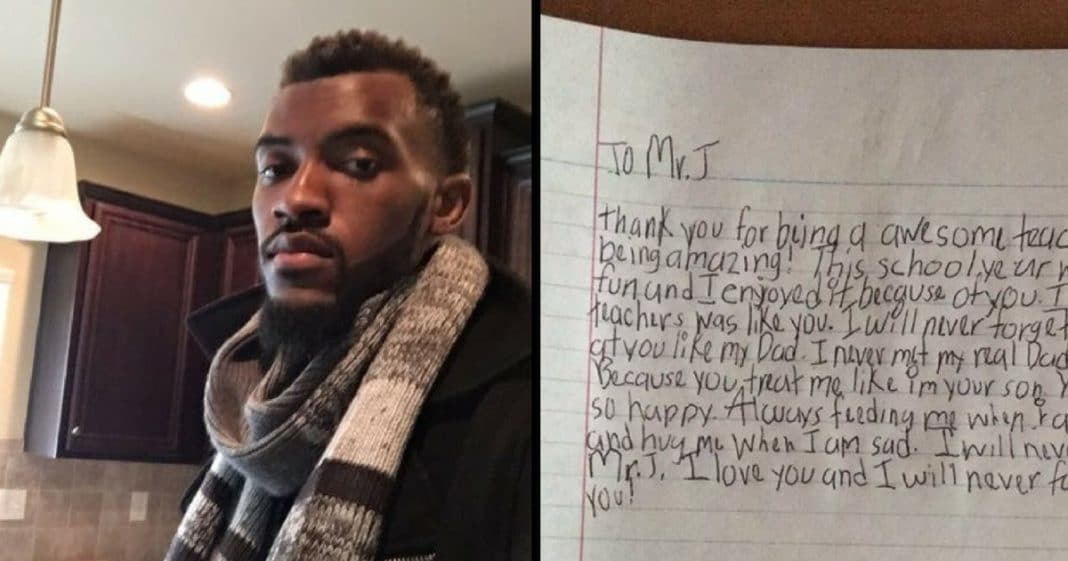 Teachers have one of the most important jobs in the world, but unfortunately they often go unrecognized and unappreciated. They work long, hard hours for a small paycheck, but they keep coming back because they want to make a difference in the young minds that have been entrusted to them.

It can be a tough job because it is often so thankless, but sometimes teachers are able to see the good they are doing, and that little glimmer of love and appreciation can make all the difference.

That’s exactly what happened to Atlanta teacher Mr. Jermaine. He walked into his classroom and found a letter sitting on his desk, and when he opened it up he couldn’t believe what he found…

So I walked in the classroom and found this letter on the desk that one of my kids wrote me and… I tried so hard not tear up pic.twitter.com/QTbQ6kZ2bH

“To Mr. J,” the note began. “Thank you for being a awesome teacher and for being amazing! This school year was so fun and I enjoyed it because of you.”

That sentiment alone is enough to touch a teacher’s heart, but it’s what the young boy, whose name is Markus, went on to say that really got Mr. Jermaine choked up.

Like so many other teachers, it is clear Mr. Jermaine is doing more than just teaching proper grammar and how to do long division in his classroom. He is taking the time to reach out to kids and make a difference in their lives.

Markus doesn’t have a dad at home, but Mr. Jermaine has been able to be a positive male role model, and his kindness and love will never be forgotten.

After Mr. Jermaine shared a picture of the heartwarming note on Twitter, it quickly went viral, touching thousands of hearts all over the world, especially those of fellow teachers.

“[This is] one of the reasons we teach,” commented Cynthia, “sure isn’t the $”

“Never was about the money,” Mr. Jermaine agreed, “so more than that.”

This letter isn’t the first tearjerking one Mr. Jermaine has received from one of his students. He shared another letter a student wrote to him after he got in a car accident:

So about two weeks ago I was in a car accident and so one of my students heard about it and she wrote me this letter pic.twitter.com/jkWivuKP2I

It’s clear Mr. Jermaine’s students have someone very special in their teacher. We know his actions will go on to impact these children for the rest of their lives.

Were you touched by this student’s sweet note as much as we were? So share this!