Mom Excited For Autistic Age 6 Son To Speak In Thanksgiving Play, Then Teacher Snatches Mic Away 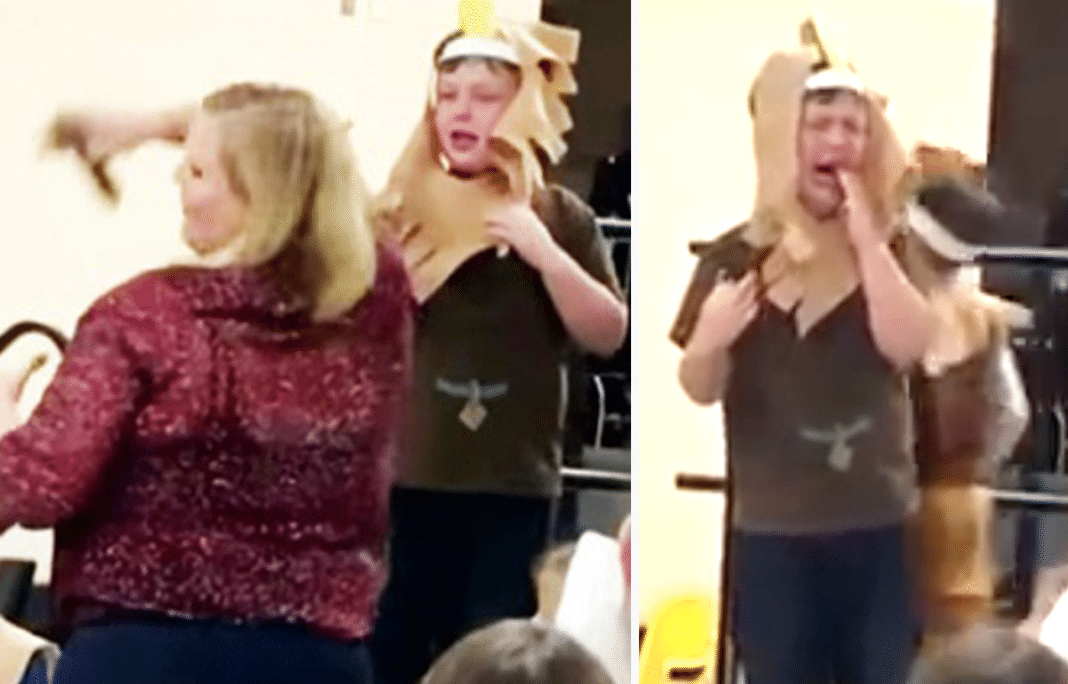 Outraged ensued after parents of a six-year-old child with high-functioning autism shared a video online showing one of the school’s teachers yank the microphone away from the boy just as he was about to speak in the Thanksgiving play.

Amanda Riddle, Caleb’s mother, shared the video on Facebook, where it went viral, reaching hundreds of thousands of shares. The video showed about 12 minutes of the Thanksgiving play, featuring Caleb speaking two lines as the audience laughs. Then he steps up the deliver one last line as the play finishes, but the teacher snatches the microphone away.

Caleb appears shocked and upset, loudly shouting, “Oh no!” as he appears to cry.

Someone in the audience responds, “Why would she do that?”

“I was all excited to go to Caleb’s play everyone did a good job,” Amanda Riddle wrote on Facebook. “I left in tears because one teacher grabbed the microphone from Caleb and in a mean way. My son is a little different I know this but his heart is so big and he loves everyone. What does it matter if he wanted to say ‘gobble gobble’ he was the turkey after all.”

See the end of the video below:

Caleb’s father, Kent Squires, talked to reporters at the family’s West Virginia home following the incident. He said he was heartbroken by what he saw.

“He never ever goes without laughing,” Squires said. “For them to do what they did is very appalling to me.”

The teacher, Mrs. Lindsey, came under fire on social media. However, the superintendent for Harrison County Schools said that Lindsey “felt horrible [that] everyone, including Caleb, thought she was being mean to him.”

“The 17-second snippet, there’s no way to defend it,” said Dr. Mark Manchin, a relative of Joe Manchin III, the U.S. senator.

Manchin explained that the teacher “had some concern about what [Caleb] would say.” (see the video below)

“The teacher just took the microphone without much thought to how it would be portrayed or how it would be seen,” said Manchin. “And I guess that kind of reflects on today’s society. Everything that we do is under scrutiny.”

Meanwhile, the school explained that Caleb didn’t get a required permission slip he needed to take part in the play. It wasn’t clear why he was allowed to give lines early in the play, but the teacher allowed him to do so.

Robyn Viglianco, who works with the mentally and physically disabled in Harrison County, told reporters:

“The child’s parents were there. If [the teacher] acted that way in front of them, what is she doing behind closed doors?” Viglianco asked.

The teacher faced a firestorm of criticism, but she also had her supporters, who shared a petition. They claimed the short video didn’t show the full story.

“The video doesn’t show that Mrs. Lindsey was only trying to protect the child from embarrassment since the play was over and he wasn’t supposed to be speaking at that time, and she had no way of knowing what he would say.”

Manchin said he would speak to the teacher and talk about ways to improve responses to students, including autistic students.

“If we had it to do over again, probably I think we all agree we would have done it a little differently.”