Teacher Driving When Owl Slams Into Front Of Car. When She Goes To Check It Out…Holy Moly 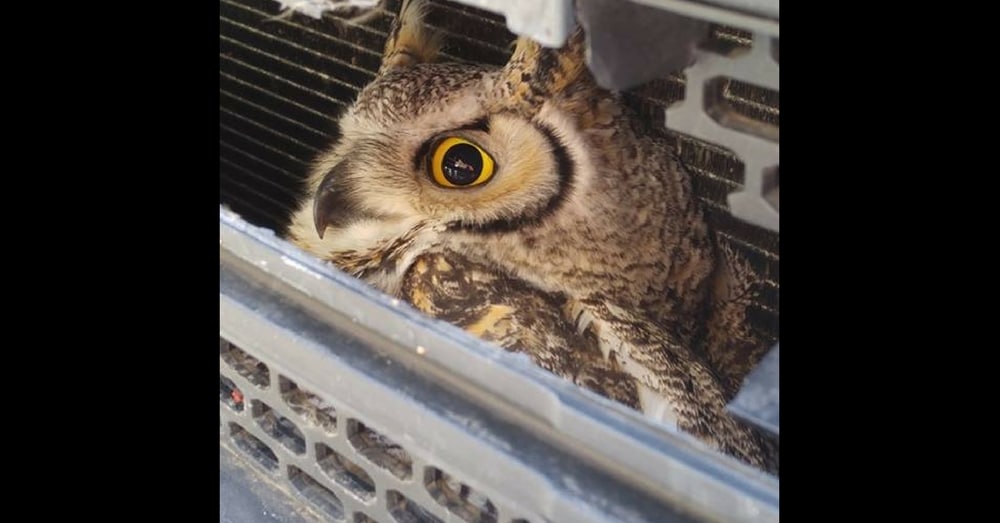 Teacher Jennifer Thomas was on her way to work one morning when she was startled by a loud thud. Knowing that couldn’t be a good sound she pulled over to see if she could figure out what had happened.

When she walked around to the front of her truck she couldn’t believe her eyes. She had apparently hit an owl, and the owl had broken through the grill of her car.

“I got out and had a look, and its wing was sticking out the grille. So it had broken through the grille and was inside my car. But I assumed it was dead,” she said

Realizing she couldn’t do anything about the dead bird right then and knowing she needed to get to work Jennifer got back in her truck and planned to deal with the bird later.

During her lunch break Jennifer approached the shop teacher and asked if he would be able to help her remove the dead bird from her truck, but when they got to the truck she couldn’t believe what she was seeing.

Instead of a dead bird she found a very much alive owl peering at her through the grill.

They immediately moved the truck into the shop class garage so they could attempt to rescue the bird. Jennifer then called Alberta Fish and Wildlife which sent Officer Lorne Rinkel to see if he could save the owl.

The shop teacher cut off part of the broken grill so Officer Rinkel could reach in and grab the owl. He wrapped his hands around the owl’s wings so it couldn’t flap them and further injure itself, then slowly pulled it out of the car.

Amazingly, the owl was uninjured. It was taken away and allowed to rest for 12 hours, then released back into the wild.

“And it was quite neat,” Officer Rinkel remembered, “because there was a full moon and the owl just flew off directly into the moon and it was some sort of fairy tale ending.”

Were you happy to see this owl rescued and returned to the wild? So share this!